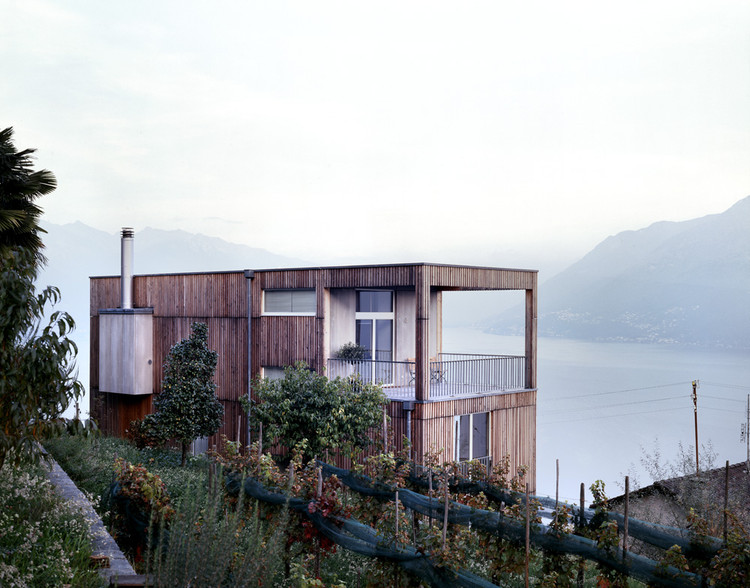 Text description provided by the architects. Casa Larga stands like a monolith in the middle of a Ticinese vineyard, jutting high above Lake Maggiore. After a stroll through the village of Incella, beyond the narrow medieval alleys, the view expands to reveal a breathtaking view. From the picturesque, populous Magadino plain to the north, the eyes wander far down the lake to Italy in the south and rest upon the hills of the Gambarogno mountain chain across the lake. The house seems to float above the hill in the midst of this fantastic landscape. Despite its location at the edge of the village, the compact building fits into its surroundings in a natural manner. Its sleek structure, which is reminiscent of the agricultural outbuildings commonly found in the area, is not an alien style. The traditional division of volume has been respected and freely interpreted.

Visitors approach the building from below – its situation on the slope makes it appear higher and larger. Two hundred years of vineyard terracing was left untouched during construction. Despite its size, Casa Larga appears to be nearly weightless in this solid environment. This feeling intensifies upon entering the building. The light-flooded stairwell connects all the floors with a boyant wooden construction. The building is accessible from the basement floor and reaches up 4 stories in a tower-like fashion. Horizontal corridors have been dispensed with. Vertical lines dominate the building's motif, which is also echoed in the rhythmically placed, high-reaching windows.

The principle of openness determined the division of space. On the top floor, the open plan kitchen transitions into a spacious living area that flows out onto the south-facing terrace. The kitchen and living room are central meeting places within the house, in which the social life of the home takes place. The generous, three-winged window opens up the view out over the lake and surroundings. Access to the narrow viewing balcony facing west is over 3 meters wide and can be open along its entire length. The warm air ventilating fireplace is attached outside to the façade to avoid optically burdening the interior space.

The over five-meter tall atelier room looks out over both the lower floors. The owner of the house – an artist – gains inspiration for his work from the breathtaking view that can also be seen from this room. The garden can also be accessed from here. The gallery, which can be used as a guest room as well, lends a special accent. There are additional bedrooms and bathrooms on both floors on the south side of the house.

Several factors played essential roles during the planning of the house. From the beginning, the builder and the architect played with the idea of building a simple barn as a neutral, creative space to foster the artistic process. While the house is not constantly occupied, it is used throughout the year, so the construction biology played a major role. The target was to be able to create a comfortable room climate spontaneously in any season. This goal was met with a moisture porous wall construction made from organic materials. The cellulose-filled sandwich-style walls actually breathe. This choice also helped achieve heating energy efficiency. The house warms up very quickly.

The building costs – and this was made clear right from the start – were to be kept within a narrow range. The stylistic limitation to simple shapes and minimalistic solutions (less is more) facilitated the meeting of this requirement. The economic considerations influenced the choice of construction as a prefabricated wood element building. This enabled costs to be kept low for the assembly while also solving what appeared to be a serious logistical problem at the site. The property was not connected and there still is no street access to it today.

The prefabricated and completely finished timber panels were trucked over the Alps. The windows arrived integrated into the panels as were the installations, while the surfaces were pretreated. The house was erected upon its foundation on site in just three days. This was only possible with the use of a helicopter.

The lacking street connection turns out to be a great advantage of the Artist's Barn. Far from any street noise, the Casa Larga provides its visitors a creative break surrounded by natural beauty, peace and quiet. The vertical, untreated strips of larch timber that line the facade are well-adapted to the surroundings. Larch wood weathers to natural black tones and exudes a calm dignity that mirrors the typical wooden structures of the area. Light, air and landscape come together in perfect harmony. 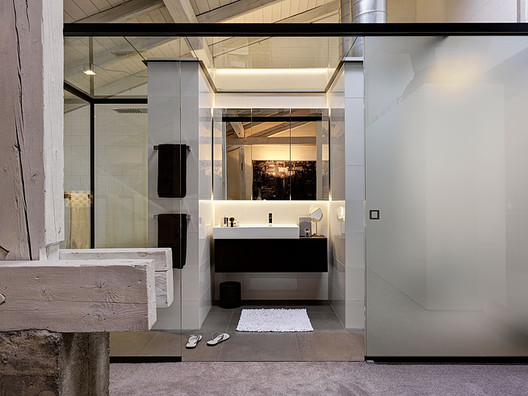 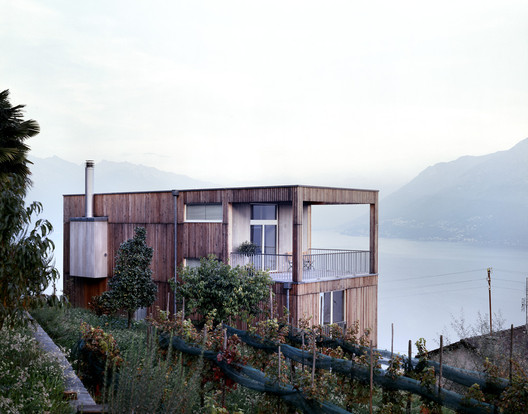