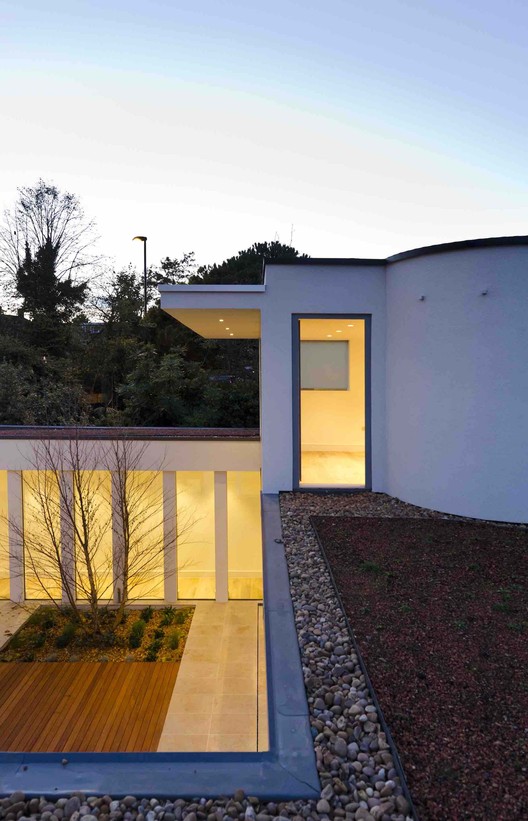 Text description provided by the architects. 64 Westbourne Drive, is located at the juncture of Perry Vale, Westbourne Drive & Church Rise in the suburb of Forest Hill, South London.

Prior to development the site was a vacant yard annexed from a Victorian villa that previously punctuated the southern end of Westbourne Drive. The villa has since been altered and arranged as self contained flats, it is expected that historically, the Victorian villa was occupied as a single dwelling by agricultural landowners tending to the land and livestock on immediately surrounding fields. The area is now densely developed, a church remains to the north west on the east side of Church Rise. The yard would likely have hosted small outbuildings, shelters for small animals and gardens to the villa.

To the west (rear) of the villa, an attached structure has been converted to provide a two storey house with a south facing long and narrow garden fronting Perry Vale, further to the West a Grade II listed Gothic villa occupies the frontage to Perry Vale and is linked to the other buildings with an ornate conservatory.

The site prior to development was generally clear, level and enclosed by a closed boarded timber fence. To the southeast corner, at the boundary of the site, two ten meter high chestnut trees create a shaded area under their crowns of circa 20 metres diameter. Three metres above ground, views towards the Church on Church rise become available.

The site had an open character above 2m historically with the fence always restricting views in from the pavement. Enjoyable views of the roof of the gothic Villa and its ornate but small conservatory were available in the background when viewing the site from the south and west. Views towards the south east of the site were dominated by the southern elevation of the Victorian Villa and the two mature trees (that are subject to preservation orders).

Initial commissioning clients briefed to explore the maximum potential of the site, but stipulated a preference for contemporary design and a single dwelling. The principle of a courtyard house was informed by the residential works of HCP, Ahmedabad. The introduction and development of first floor elements progressed through design review with Richard Nightingale of Kilburn Nightingale.

Parameters for height were dictated by qualified daylight and sunlight assessments while views of the Listed Gothic Villa and roof line of the Victorian Villa were maintained by informed positioning, scale and mass of the first floor elements. The form of elements was led fore mostly by sun path analysis, and developed with aesthetic testing of scale, proportion and aesthetics in elevational study. The pattern of development of the first floor allowed the site to maintain an generally open character with key views remaining available.

Living areas and a first floor study were programmed to be south facing, while bedrooms were located in the southern side of the house facing north or out onto a second minor courtyard. There are no windows on the north boundary facing north to protect the amenity of the residents of flats in the Victorian Villa.

Two stairs serving the first floor rooms area arranged opposite from each other accross the courtyard, a spiral stair serving the study and a traditional dog-legged stair serving the bedroom to the south. A private small second courtyard is accessed from an open hallway under the returning flight of stairs and is overlooked by a bedroom on the ground floor.

The ground floor and courtyards are built at circa 1.2m below the surrounding pavement level to ensure comfortable living accommodation is formed behind the wall that retains a height similar to the historic closed boarded fences. The wall provides privacy and security from the surrounding busy pavements.

Development of aesthetics, proportions and relationships of elements and materiality were developed by progressive revision and elevational studies with regular critique and pier review.

Materials reference the surrounding buildings; Yellow buff bricks facing the boundary wall reference the elevations of the Victorian Villa, White render features on window reveals of the Victorian buildings and the general elevations of the Gothic Villa, the use of Cedar seeks to broker a relationship between the bodies of the nearby Chestnut and Ash trees. 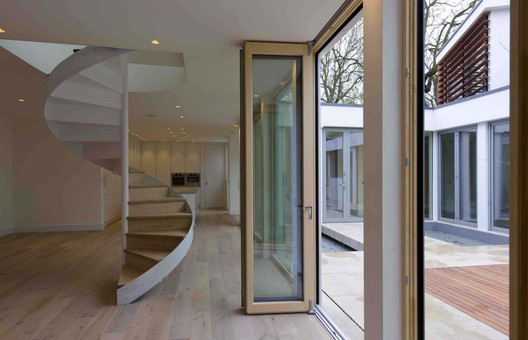