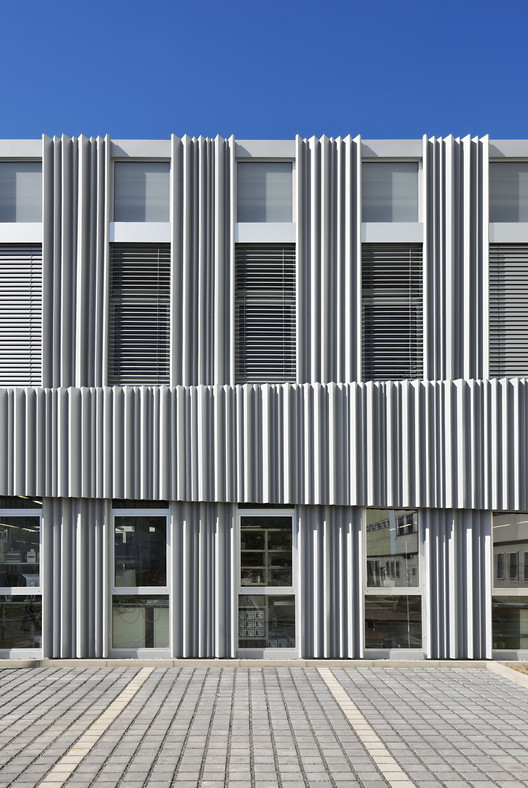 Text description provided by the architects. The task in this project was to remodel an empty production facility, which was built in type design of precast concrete, into a modern, flexible office and workshop building, which meets modern demands. In the present Volume was to create a structure that allows for fillability for up to eight independent functional units and provides for future employees attractive jobs.

The wall lining large concrete sandwich-panels have been removed, and the existing structure of the hall structure was upgraded statically. The small-scale distribution of the new window façade, owed the flexible divisibility of the office space is covered with curtain-like façade bands, consisting of individually folded metal-sheets, that vary in height and depth.

During the day and within changing light conditions the shadow in the internal surface of the facade panels changes. By this the color shimmers in different tonality with hard or soft contrast.

The façade is divided vertically into three zones, top and bottom the window zone, here switches fine grid, the closed facade element with the window opening. The central zone is set before and spans the entire building as a closed band, which alternates in height from 0.90 m to 2.60 m. The upper end of the square sheet is not enclosed with a cover plate, so that the jagged shape of the facade sharply becomes apparent against the sky.

The center axis of the total of 9 fields was formed as a common foyer and circulation zone over two levels and with two outside entrances, streets and courtyard positioned. The outside part of the entrance is a funnel-shaped space, unlike the rest of the façade this part is covered with plain plates of Alucobond which are aligned conically towards the light metal doors.

Inside interior walls and ceiling from gypsum boards widen to the middle axis. The perspective effect is supported by flush built-in lights which are also mounted in alignment according to the expansion.

In the center of the access zone the space expands to the full height of the existing production hall. The air space is spanned by a reinforced concrete bridge, the glass balustrade allows visual relationships on both floors and into the individual functional units. On both sides atriums are arranged which were created by removing the former roof and now illuminate the main staircase via a two-storey glass wall. The resulting outer space was designed with a wooden deck and landscaping. The great spatial depth in the building stock is reduced by this measure and the office space as well as the foyer itself is supplied with light and air.

Besides this spatially expressive designed area in the center axis two walkable atriums are arranged, which reduce the high depth of the existing building and supply the office space and the foyer itself with light. 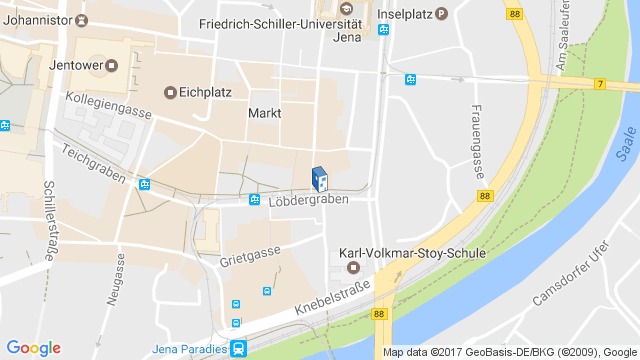