Save
Have you Seen This Forgotten PoMo Jewelry by 1980s Architects?
Share
Or
Copy

It's not often that a major design project by a bevy of superstar architects is forgotten to history. But this seems to be what happened in the 1980s, when Italian designer Cleto Munari commissioned a stable of world-famous architects to design a new jewelry collection. The (unashamedly PoMo) results were documented in a now almost forgotten book by Barbara Radice called simply "Jewelry By Architects," which included interviews with each designer. Originally published by Monica Khemsurov of Sight Unseen, this article shows off just some of the contents of this fascinating work.

Until about six months ago, there was only one Munari we idolized: Bruno, one of our favorite 20th-century designers and design theorists. (If you haven’t read Design As Art, we suggest you hop to it!) But then, one fateful day this past spring, we were wandering aimlessly around the internet when we stumbled upon the biggest editorial coup we've scored in years, and thus began our love affair with Cleto Munari. The Italian designer—who, as far as we can tell, is unrelated to Bruno—commissioned a dream-team of architects like Ettore Sottsass and Peter Eisenman in the early ’80s to create a jewelry collection for his eponymous company, and the project had almost no coverage anywhere on the web. After immediately snapping up a copy of the incredible out-of-print book that documented it, which we’re excerpting a small portion of here, we set about doing more research on Munari himself. Turns out he’s a bit of a Sight Unseen patron saint, who dreamed up all kinds of cross-disciplinary projects for the precious metals–focused design brand he founded in the ’70s with Carlo Scarpa. “It is most interesting to me to have a poet design a table, a painter design a credenza, and an architect design a spoon,” Munari told the Huffington Post in an interview two years ago. 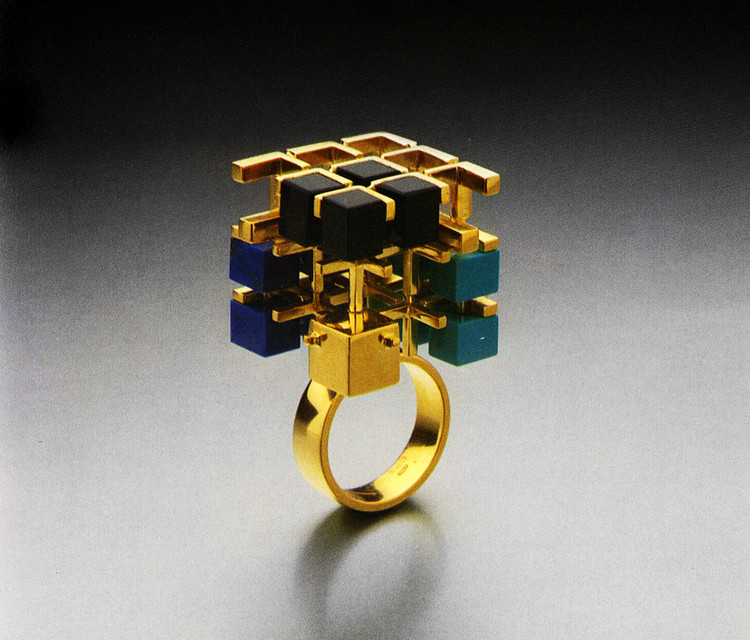 Obviously his jewelry series in particular strikes a chord with us, considering the Sight Unseen online shop began as an experiment in asking non–jewelry designers to create wearables. Munari’s chosen stable included not just the titans of architecture featured below but also Mario Bellini, Michael Graves, Richard Meier, Paolo Portoghesi, Stanley Tigerman, Oscar Tusquets, and Lella Vignelli, whose contributions we didn’t have room for in this story. The full collection comprises more than 150 pieces designed between 1982 and 1986, and the book documents them with accompanying sketches by and interviews with their creators. After you’ve checked out the highlights we’ve compiled below, get a copy of the book for your own library by clicking here

(if there are any left once this story goes live, that is). It will no doubt hold a cherished place in ours for a very long time.

I admire Egyptian jewelry because it is extremely delicate and coloful and it is from the time of very big monumental architecture. Recently, I’ve liked also some Indian pieces made of pearls, precious stones, and enamel. But I don’t know much about the history of jewelry.

My jewelry tries to combine different scales, it is bold in one way and delicate in another. I used architectural elements and I liked the idea of representing something. My jewelry is the miniature of something else. It is against the abstract approach, and it has not been done now for some time.

Not really. Furniture is my first love. So if I have to buy something I buy furniture.

Have you designed jewelry before?

What kind of woman did you have in mind when you designed your jewelry? What woman do you fantasize wearing them?

I was not thinking of any woman. These pieces propose a different relationship to the human wearer. They are not mimetic of human form or proportions. Their scale is not taken from the scale of a person. As such they deny any connection to or embellishment of human form. They are not in the least decorative. Neither are they representational. They are part of a scale continuum of objects from the ring to a building.

Since Freud, since the unconscious became known, man has been psychologically different. He is no longer “in the center” as in the Renaissance, because he’s studying himself. I would like all my jewels to be the archetypal symbol of this decentered man and his unconscious.

What kind of woman did you have in mind when you designed your jewelry? What woman do you fantasize wearing them?

My wife always wears black and likes very primitive jewelry, just silver or brass. I think my pieces are for a woman who likes them, possibly a crazy one. I think of a woman who is not overtly sexy but who has some mystery about her. I hope my jewelry is a little magic… if she’d wear them they could improve the magic…

Do your think your jewelry is consistent with your architecture and design?

On what occasions do you think your jewelry could be worn?