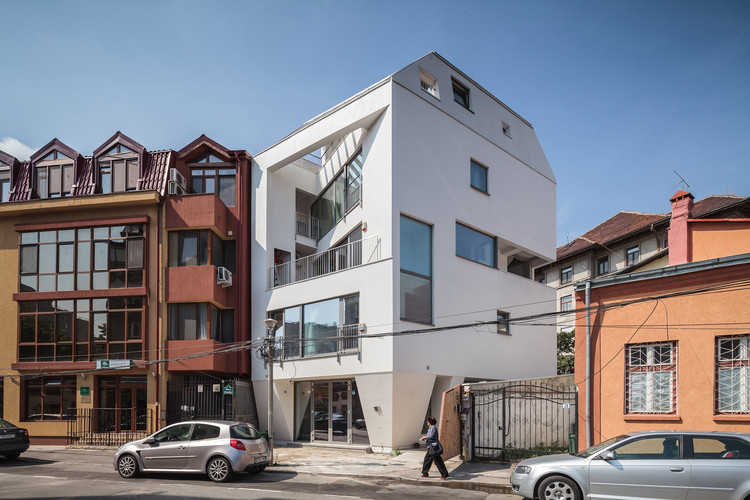 Text description provided by the architects. The particularity of this project is the very small (116sqm), plot and the desire of two friends to build together their urban apartments, each of them with its own appendix functioning as a professional space – a wine bar and a recording studio respectively.

These special additions, along with the reduced imprint of the house, dictated a vertical spatial layout: the wine bar and duplex belonging to one of the clients were placed on the underground, ground floor and first floor, thus also enjoying the presence of a small courtyard, whereas the recording studio and the other duplex were placed on the terraced attic, the second and the third floors.

The result was a five-level building with four functional units. The height - unusual for a house - as well as the owners’ lifestyle and requests led to the design of four different access ways and a semi-open exterior staircase, integrated in the building’s envelope. The wine bar, located on the underground level and open to the public, communicates directly with the street through a buffer space on the ground floor.

Joining all functions in a compact manner was balanced by large openings towards the street and double height spaces. Interior spaces opened on two levels and expressed in the facade by large vertical windows, the loggia on the second floor that extends up to the attic, the exterior staircase included in the volume of the house and the openings randomly paced on facades give a unified compact look, in which one can hardly read levels and functions.

The resulting building preserves the defining elements of the traditional houses in the area: the courtyard with garden and private access, directly from the street, the roof framing with attic. The house links and contributes to the public space through its generous loggia. The atypical height is the only element that suggests the mix of functions and the existence of several owners. The compact, robust, slightly defensive silhouette is inspired by the traditional typology of a house in Romania named “Kula”.