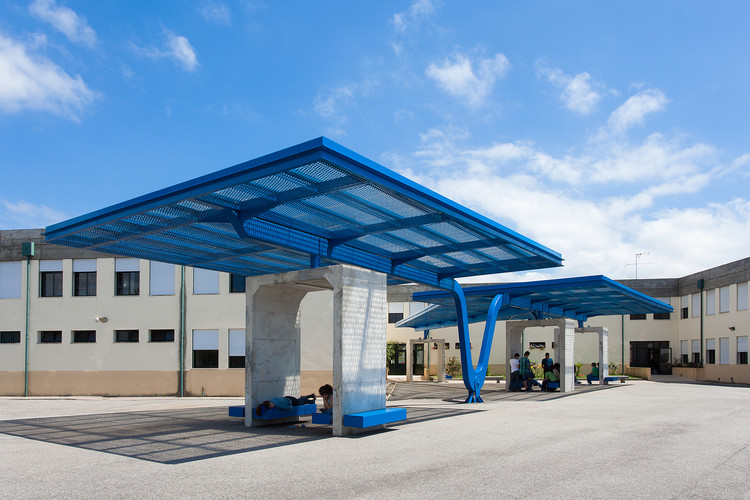 Text description provided by the architects. In French the word “préau” refers to an exterior covered space, but unlike our definition of covered / coverage, which may represent an isolated and independent element, the “préau” defines an element closely linked with existing building, defining a stronger relationship of dependence and cooperation. It is usually a space of great importance in the school's design in France, which may be translated as "the covered part of the playground". Adverse weather conditions in many French cities led to the adoption of this typology in which students can leave the indoor space but still have a place where they are protected.

This concept illustrates adequately the motivations of the proposal: a space that introduces a new comfort in the existing complex, working with him and not a mere addition of new functionality. The “préau” is deployed in a quadrangular space that is delimited by the school building on three sides. We tried to match the desired program with the flow of spaces framed in the existing school's system of routes. The protection offered by the new element allows the enjoyment of exterior space even with adverse weather conditions such as rain or intense sun.

Since the definition of “préau” offers us a clear idea of the intended implementation and functionality in the intervention, we used the image of the vineyard to establish the préau's morphology: vineyard and wine production is a hallmark of the Monção region. To be more specific, we use the image of “ramadas”, also called “latadas”: structures of horizontal arrangement of the vineyard built in metal profiles based on vertical elements made of granite. To these granite / concrete elements, called “esteios”, the bearing elements in the set, we matched precast concrete elements placed vertically and with a strong material presence. One main beam supporting the roof, and whose design is presented with more fluid forms, corresponds to the main trunks of the vines of organic trace.

The horizontal "mass" which is constituted by the vines' foliage, is implemented as roof of perforated metal panels and a transparent sealing polycarbonate sheets. One of the assumptions of the stabilization of the final solution promotes a shading control that allows the passage and diffusion of sunlight. The full shade created from completely opaque elements was avoided. We explored a materiality that models and mitigates intense sunlight exposure and at the same time prevents an uncomfortable darkness on cloudy days. In terms of materiality, and as already indicated, we used the massive concrete alongside a more fluid and light metal structure. The ultimate goal was a nice sense of balance. The raw material of the concrete was opposed with the metallic structure's carefully painted surface in a colour that stands out, even compared to the existing building.

In conclusion, we provided, to Monção's elementary school, an architectural element that characterizes and promotes it in terms of use and enjoyment of the exterior, not forgetting the didactic nature that even an intervention as small as this can bring to the daily lives of students. The response to the initial program provided resulted in a proposal that aims to build an object that complements the existing, that goes beyond the sole function of covered walkway, allowing enjoyment and encouragement to life on the outside. Its materialization obeys to criteria of great lightness and formal fluidity, interrupting place's identified austerity, but above all, reinterpreting the project themes found in the local vernacular architecture. 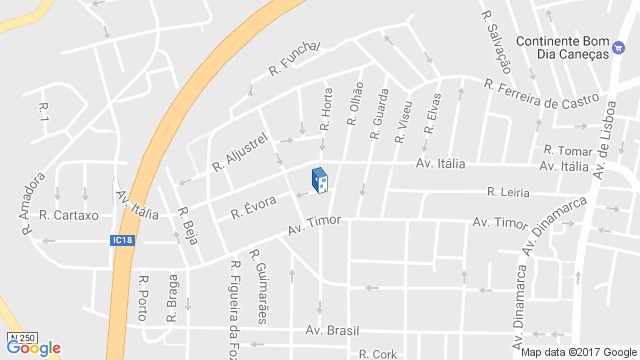 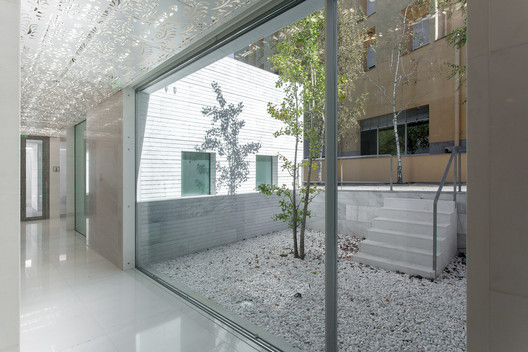