Upon the announcement of the imminent demolition of 5 Pointz, the internationally renown graffiti mecca in Long Island City, New York, a group of young designers - Arianna Armelli, Ishaan Kumar, David Sepulveda and Wagdy Moussa - joined together to form DEFACED, "a theoretical project designed to ask the question of whether an organization for the preservation of cultural relics of New York and cities around the world can be formed and implemented." The group focuses on the gentrification of New York City's cityscape and its accompanying sociopolitical issues, along with the protection of cultural landmarks and districts around the world. 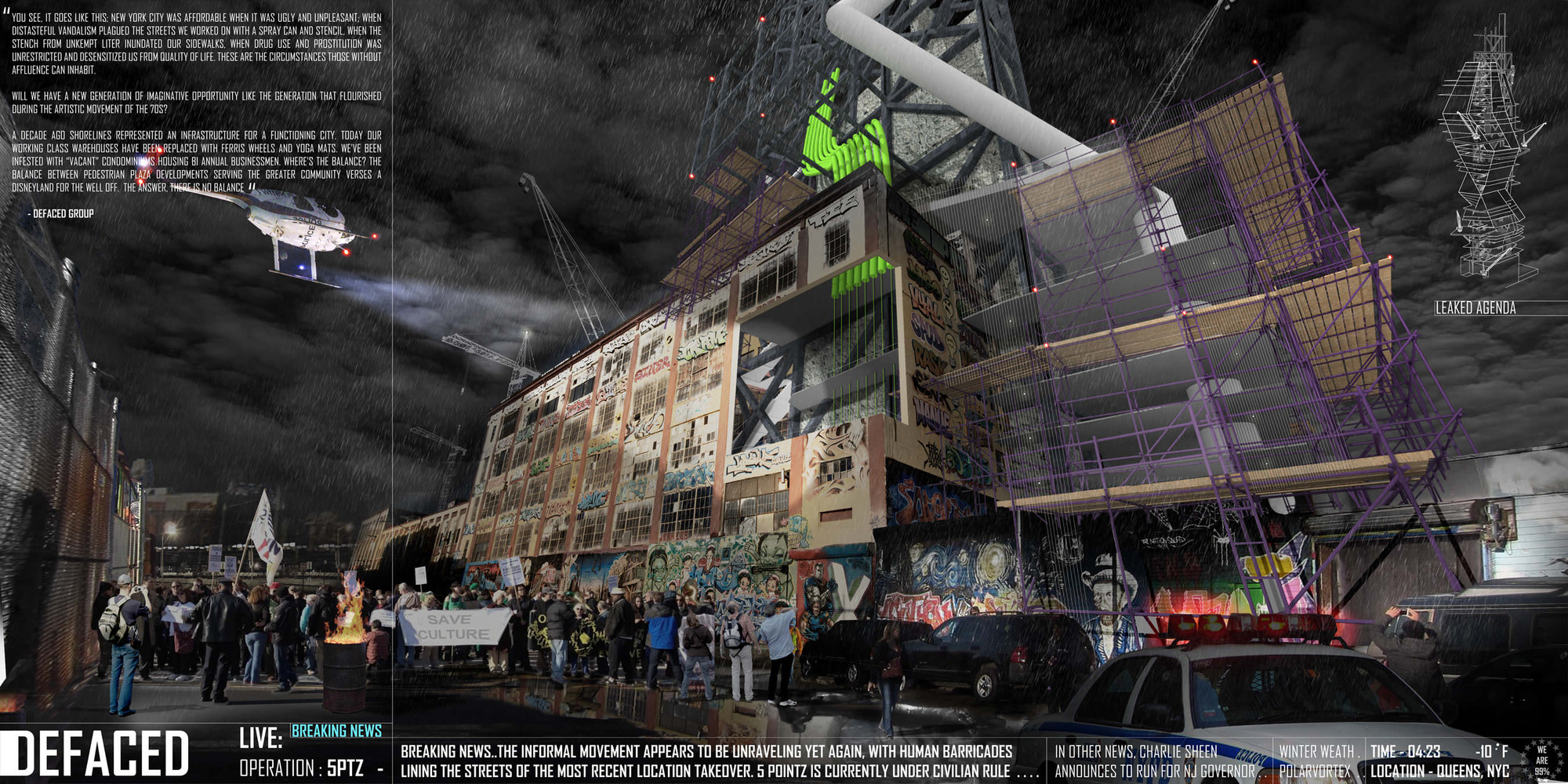 Setting the stage of a city affordable only when in the most unkempt of conditions, DEFACED contrasts it with the current trend of a city replacing working class warehouses with Ferris wheels and yoga mats. The project poses the charged question, "Where's the balance between developments serving the community at large and a Disneyland for the well off?"

A beacon of hope for immigrants worldwide, New York City developed along principles of industry and grew upon the hard work of a new citizenry that infused a deep pride in the title of New Yorker, a title earned only by island inhabitants fully invested in the economic growth and flourishing of the city. As globalization shifted the paradigm of industrial manufacturing, followed by the fiscal crisis of 1975, New York City's ruggedly deconstructed and neglected urban environment opened to a new generation of inspired youth, artists, musicians, students and independent creatives with affordable housing and allowed for the blossoming of an influential community integral to the city's development.

After the introduction of Mayor Bloomberg's attempted rebranding of the city in 2001 as the "Luxury City" in order to attract a specific residential class, many current residents found themselves excluded from the new vision of their home. Rezoning and rising neighborhood markets led to the closing of small businesses in favor of corporate chains and the replacement of industrial brick and street art by widespread curtain glass. DEFACED cites the assumption of residential developments that clientele who could afford the new situation came from city's business elite, eradicating the opportunity for non Wall Street professionals to claim a place in their city.

This is the situation into which DEFACED was born. Structured around the ideology of reviving the principles of what it once took to be a "true New Yorker," the organization values artistic freedom and expression, and fights to protect and preserve the cultural heritage and existing working middle class of New York City. Vowing to bring back the city's original spirit of openness and inspiration for the young and creative, DEFACED has focused first on Long Island City as a point of intervention and precedent of progress. Though the site has long been plagued by its loss of industry, that very absence allowed for the empowerment of artists and cultural spaces including museums, artist studios, and galleries. 5 Pointz exemplifies this repurposing of Long Island City's industrial past for artistic expression and cultural unity. Named for the five boroughs coming together as one, the graffiti exhibit has transcended Long Island City and become an international mecca for artists and art enthusiasts alike. A year ago, this public art center was added to the list of buildings to be torn down and replaced by the movement of residential towers steadily moving inland from the city shorelines. DEFACED has assembled to purchase this land back from the developers.

The proposal calls for a sustainable core assembled rapidly onsite and featuring all necessary infrastructure to allow more buildings to branch off from it. A sustainable rainwater collection system will be created by rerouting existing storm water sewer lines, treating the water for re-use within the building core, using surrounding roof surfaces for rainwater collection, and supplying residents with both grey water and freshwater. A proposed refuse core would contain and repurpose the garbage disposal of both 5 Pointz and 50% of the Long Island City's residents to reduce annual waste overall. Establishing a core and circulation allows for the building to function as a living organism, attracting young artists, the homeless, and the poverty stricken.

"Returning to New York’s founding concept of being a playground for making, a ground is given to function as the center of a new mosh-pit of collaboration and invention," the group explains. New York is widely considered the epicenter of creative expression and opportunity. DEFACED inquires, "A countless number of famous talents we know and respect today are products of a former New York City, one that bred creativity through hardship. Why can’t we have a new generation of imaginative opportunity like the generation that flourished during the artistic movement of the 70s?" 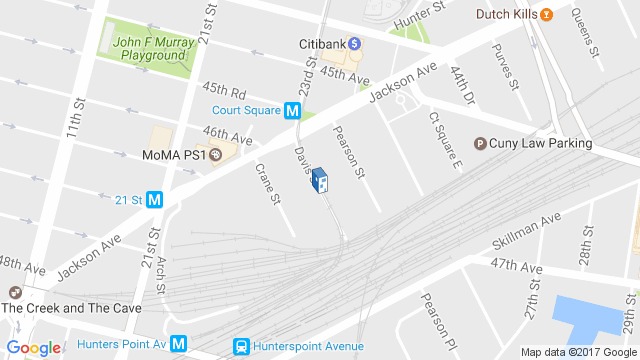