Text description provided by the architects. The Geometry of Time

Space is occupied by someone, but the trace of memories by the space and time remains in the physical space, not the place. This is the reason why architecture is the subject of fear and dimness at the same time. Space spits out the past memories in the footsteps of the past that are reinterpreted by someone who lives in the present. If there is geometry in material properties, what could it be and what should it be?

The client called us the day after registering the lot to request a design plan. I did not hesitate even for a second before setting up an appointment as if I had known the owner. Was it because of such confidence?

The client, who is a TV commercial producer, had strong principles about architecture and clear requirements for the details to realize them. I thought that architects create architecture, but clients create the architects. He demanded remodeling the existing single-family house into office spaces with a new type of sophisticated sentimentality covered with modern materials. What kind of forms and materials are needed to renovate with modern sentiments a brick house that is decades old?

The Geometry of Giwa and the Sentimental Identifier Giwa (Korean roofing tiles) is order.

Giwa roofing is a system of a type of geometric orders. It is a combination of units optimized to endure rain and snow and an economical system to build the gable shape. These tiles pair up with one another to create texture and tactual sophistication. However, the sophisticated Giwa tiles are sometimes placed on the ambiguous borderline. The curved figures of Giwa cluster to form the wavy shapes and the triangular geometry of gable constructs the order of the past. How would you comprehend the rules created by the repetition of its texture and geometry and modernly reinterpret the geometric cluster of the units? They come from the geometric combination by sentimental identification.

The existing geometry of red Giwa and bricks contrasts with the gray tetrahedrons of black stainless steel in terms of texture and material sentimentality. The different principles of geometry share heterogeneity and homogeneity and form a contact point at the same time. It is the tension between two co-existing things with no one being superior, and the balance point created by the sentimentality of time and space.

Space Reconstruction and Expansion of Basement

The most important and the most difficult part of remodeling is reviewing the measurements considering the commerciality of expanded space. It means the scope and budget of remodeling and decides the future commercial value of architecture. Considering the limited budget and the future expandability, I chose the basement space that can be expanded regardless of floor area ratio as the major site of this project. In other words, I secured on the basement the required parking space considering the maximum virtual measurements for future expandability.

This space has been planned to provide the parking space and to be used as various forms of exterior space connected to the basement. To secure this parking space, a certain steel lever pattern was changed in angle to alternate the louver on top and the stone on the bottom to create a pattern. LED units were inserted inside the louver on top to allow various activities at nighttime in addition to the use of space for parking. The horizontal flow of the new exterior walls in marble connects to the existing parking space to maximize the basement space for various uses such as a gallery. The basement space was used to the fullest without changing the floor space ratio to leave room for additional expansion. The existing house on top removed the existing ceiling materials to open up the space for the convenience of renters.

The Reconstruction of Geometry

Eighty-seven black stainless steel tetrahedron blocks form the basic unit that encases the existing masonry walls. The exterior of black stainless steel cubes is a lump of skin made of 530 triangles and rhombuses. In other words, the 530 geometric shapes are divided and reconfigured by the bored plates on top and bottom and the laser-cut triangles on the center. The pattern of about 200,000 bored circles and 15,000 geometric patterns filter the light from the outside in various quantities and qualities. Light is reorganized and the space is newly configured. The past footsteps are reconfigured by geometry and the space is given the sense of time by the change of geometric light. 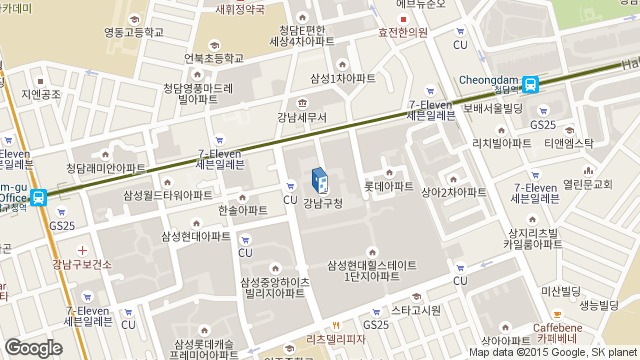 Location to be used only as a reference. It could indicate city/country but not exact address.
Share
Or
Copy
About this office
JOHO Architecture
Office
•••