Located close to Copenhagen, Vinge is Denmark’s newest sustainable city. The first neighborhood for the city, designed by Danish landscape architects SLA for the Municipality of Frederikssund is aptly named the Delta District. The plan takes advantage of man-made landscape features to create a unique residential community closely tied to nature. Read on after the break to learn more about the proposed plan. 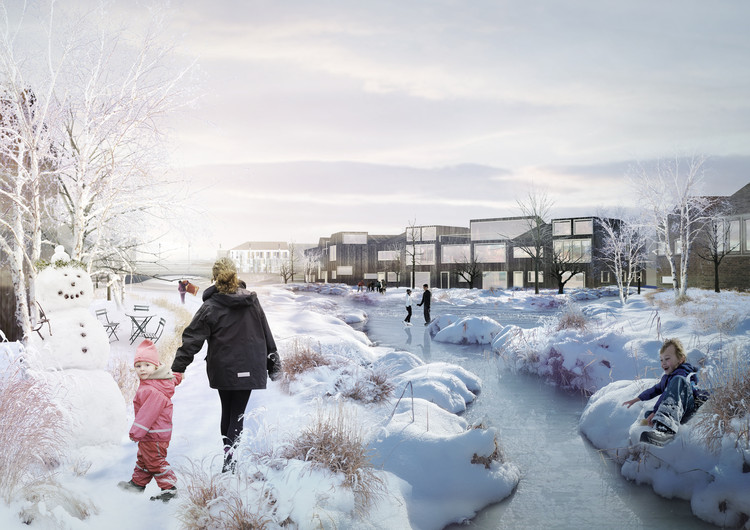 The planning of Vinge’s first district has an unconventional starting point that aims to address the key challenge of storm water management in the region. In order to safeguard the city against seasonal flooding, a man-made delta will be created. All of the rainwater will be directed to this large wetland area in the center of the district, making it a prominent feature of the local landscape.

Located between two nature conservation areas, the addition of a man-made delta will allow the development to better fit into its surroundings. According to project manager Thomas Sichelkow from the Municipality of Frederikssung, “Water has a great value, and we cannot see the point in hiding it in big drains and pipes, therefore we would rather emphasize it and use it in the Delta.”

Nature is an essential part of a sustainable city.” As a part of this desire to bring the development back to nature, the city will include many small green areas, each with their own unique habitat and creating a variety of flora and fauna in Vinge. To further the goals of sustainability for the development, all houses will be required to be heated by geothermal energy in addition to utilizing other passive and low-energy features.

As for the architecture of the development, the Municipality of Frederikssung is inspired by new towns in the Netherlands, encouraging all houses in the neighborhood to be different. In describing the architecture of the new development, Thomas Sichelkow states, “We want to create a city with interesting architecture and architectural diversity. Therefore, we let the next few homeowners decide which houses they want to build.” Composed of about 450 homes, the district will include a variety of residential modes, which range from small single-family houses and cluster houses to apartments and larger villas.

The project will start in spring 2015, with the first residents of the Delta neighborhood expected to arrive in early 2016.