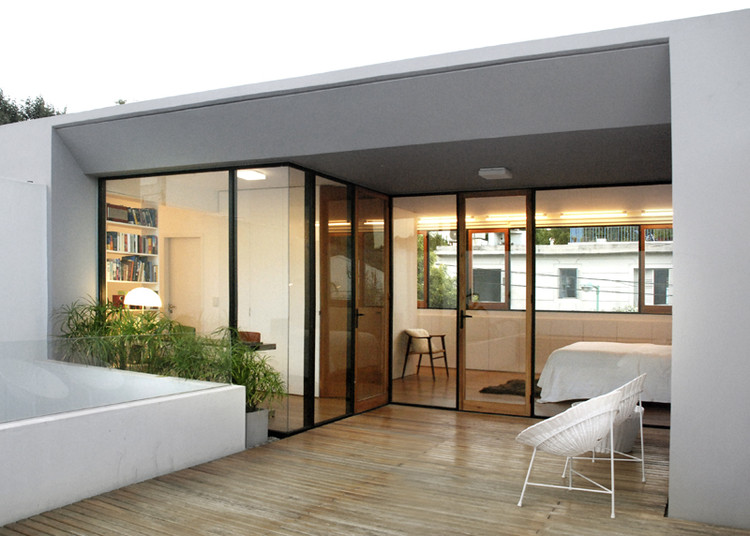 Text description provided by the architects. The objective of the Project was the restoration and extension of a single family townhouse, in the area of Palermo within the city of Buenos Aires, from the beginning of the 20th century. The challenge was to update the house to the 21st century way of living.

The house is located in a street passage, one of the few urban sub-systems of this kind which managed to remain almost unchanged. The street is shaped by a row of townhouses each one with a similar arrangement; an inner back patio dividing its single plan in three distinctive spatial units. Over the years some of these houses have been added an extra floor, and their terraces grew up to accommodate new functions such as extra bedrooms, laundry rooms or playrooms. In the beginning, all of the existing houses shared the same stylistic qualities proper to their period, but as time went by their façades changed to create the eclectic scenery we can enjoy today. Fortunately these changes respected the original overall composition and lines, proportions and mass, maintaining its domestic character and its almost suburban quality.

The original building, as interesting as it was, had no real historical value, but, because of all the combined factors detailed above, we decided not to demolish it. We defined the task as an update of the house to accommodate contemporary life, within the existing typology, maintaining the original single elements worth keeping and adding an extension to accommodate the rest of the program.

The program is spread in two plans and a half-floor plan. The ground floor plan retained the three spatial units around the patio, but reconfigures their uses to match the new way of living. The entrance leads to the central space of the house, containing the patio, and dividing the house in an almost symmetrical arrangement, powered by the twin curved doors leading to the living room and the playroom. These doors are kept as an evocative gesture, although the function of one of them is no longer needed. The main space unit, along the side, contains the public areas of the dwelling, living room, dining room and kitchen. They conform a single space but remain recognizable by the difference in treatment of their ceilings; the original complex Beaux-Arts ceiling of the living room is restored, a much cleaner, but still classic ceiling is added to the dining area, and finally a contemporary negative joint is introduced in the kitchen, creating a progressive transition throughout this space. This is enhanced by positioning the kitchen’s elements parallel to the direction of the room integrating it to the dining area. The space unit on the other side contains; a small bedroom and bathroom, the re-located staircase, in direct relation to the central hall, and the playroom, which is placed towards the street. All of the wooden floors are kept and restored, and the tiles in the central hall are removed and replaced, due to aging and cracks. All of the existing, good quality doors are also kept and re-located along the dwelling. The half-floor plan, now reached by the new interior stair, accommodates another bedroom with its own new bathroom. And as we move up to the first floor, we find ourselves in the completely new extension, built to enhance its connection to the exterior by means of two large glass surfaces, one towards the patio and terrace, and another viewing the street. This new extension contains the main bedroom, with its master bathroom overlooking the passage, and the family studio in connection to the terrace.

The newly constructed extension is understood as a whole new volume, positioned to enjoy natural light, while carved so as to avoid the strike of direct sunlight. These carvings generate both, a roofed terrace overlooking the patio and a continuous eave towards the street. The new volume concentrates all of the formal features in the intervention and creates a dialogue with the existing building. Its intention is to act as the top of the classical façade without loosing its contemporary identity.

The chosen materials where dictated by the existing palette, heart pine floors, cedar and black painted steel for the windows and doors and white plaster finishes for the walls. This repetition allows a sensitive integration throughout the whole building. The objective of the intervention is to accommodate the program of a contemporary way of living in a pre-existing built frame, and the generation of a quiet dialogue between new and old.