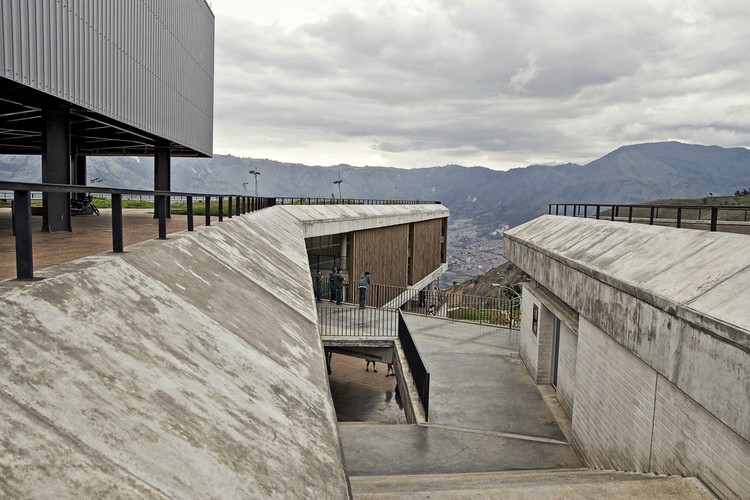 Text description provided by the architects. The building is located in the Santo Domingo Savio neighborhood, on the northeastern slope of Medellín. The lack of public investment and the weak presence of the government in this territory increased during years the inequality in one of the poorest and most violent areas of the city.

The School stems from the project “Medellín, the most educated” which aimed to improve the quality of basic education in the neighborhoods with the lowest coverage. The Mayor Sergio Fajardo proposed to refurbish 132 educational institutions and to build 10 new schools creating at the same time new spaces for the encounter of communities.

The site for the Santo Domingo Savio School was located between two existing schools; the new building should link both and wave them to the urban structure using the concept of “open facility”. Through the conception of an open architectural and urban intervention the new School should become a center of cultural, recreational and educational activities; an urban reference that promotes the integration of the society.

The lot had 140.000-sq. feet, an irregular form and a 35% slope. These factors made the project more complex but offered an exceptional condition; the building could work as natural lookout to observe the city and its mountains. Besides, it was a drop of about 3.5 meters between the access road and the site and the lot served as connection between neighborhoods, it was crossed by some paths that linked the irregular urban structure; the project had to dialogue with these signs.

Anserwing to context conditions and being aware of the fact that the neighborhood had no representative public spaces, we decided to use the roof of the School as a lookout platform. This 42.000-sq. feet plaza is conceived as a surface where people can meet and share values allowing them to change the way they relate in community and with the city. This new livable geography is a place where the landscape becomes a fundamental part of the community everyday experience.

In order to respect the existing walking paths that connect the neighborhoods in east-west direction, the people access to the School through a stair-street that also joins all levels of the building. To facilitate the north-south connection through the new building between the existing schools, the main volume is suspended to allow the transversal circulations and to create a common meet- and playground for the whole complex.

These directions given by people together with the geometry of the lot, the L-shape building generates a patio opened to the landscape where civic, recreational and sport activities within the School take place. To complete the public program we decided to place an auditorium in a public box over the plaza, this can be used for any type of events without interfering with the academic activities.

The project’s idea was to give novel meaning to the neighborhood’s expression of spontaneous architecture such as terraces, stairways and balconies. The new building declares a sense of community and place belonging.

Thanks to the multiple interventions driven in Santo Doming Savio, this neighborhood could overcome many of the problems that overwhelmed them during decades. The Santo Domingo Savio School, together with other projects realized to renovate this area, allowed the social inclusion of a forgotten community. The people from other sectors in the city were also able to visualize problems that were occurring in the city.

We recognize that the construction of infrastructure, educational in this case, is the physical materialization of more complex projects that try to recover from social problems inherited to long periods of violence. Architecture itself can´t solve the problems but can help, the Santo Domingo School is a first try to reconcile the relation between the city and its inhabitants, a process that has to be consolidated in a long term.

The School had a significant impact in the urban form reaching open public spaces in a very dense and irregular urbanization. These spaces dignify social groups giving the people identity elements that link them with the city. The Santo Domingo Savio School carries today a big responsibility: it receives thousands students per day divided in two journeys. For most of the people living around it is the only place where they can escape from the daily routine taking part of the situations that are happening every day in the plaza, in the patio or in the auditorium. The building today looks overused, what is a sample that such spaces must exist and be replied in other sectors of the city. 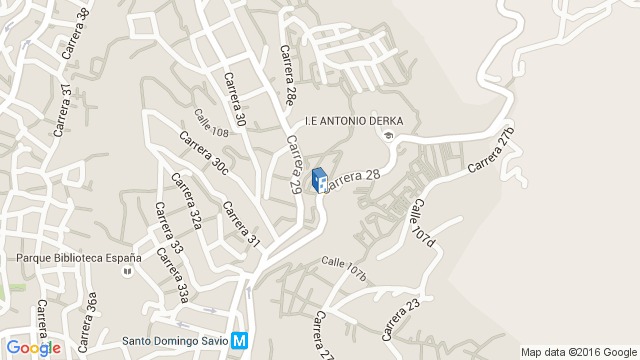