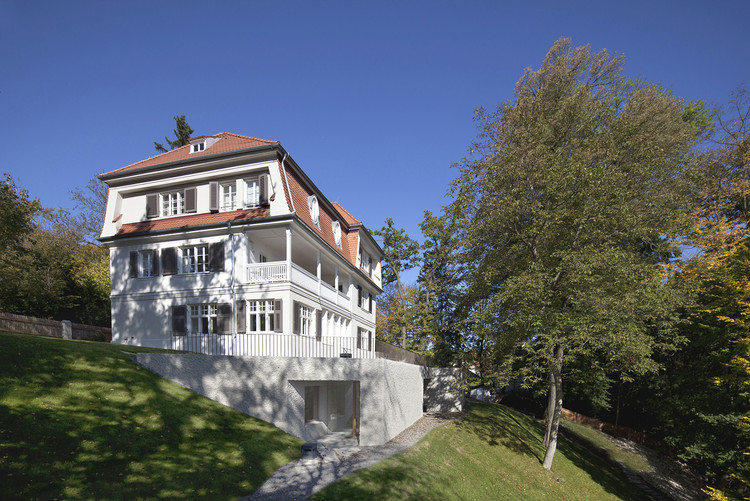 Text description provided by the architects. This new building with its bush-hammered exposed concrete surface stands in the foreground of a listed building from the year 1890.

The listed villa was completely renovated, the extensive and inappropriate developments of recent decades were removed, and the traditional room structure was restored.

The existing retaining wall with terrace, on the slope in front of the building, was severely and irreversibly damaged and could therefore not be preserved. The new construction echoes the building configuration and cubature of the historical substance.

The rebuilding of the terrace offered the opportunity of making the area between the retaining wall and the outer basement wall, which had formerly been filled, accessible as living space, and of bringing light into the basement, which had previously been quite dark.

Furthermore, the open areas of the park-like property below the formerly forbidding retaining wall are now directly accessible from the living space on the lowest floor (the former cellar), and the relation to the park is established and completely revaluated.

The approving authority has stipulated that no extension of the existing structure and no additional storey should be visible in the external effect of the new building. This is in accord with the spirit of the design: to feature the façade (the historical retaining wall) of the new building as a constructed rock face on the slope and to enable light access through three cave-like openings in the rock face.

The design concept and the materials of the façade, with its bush-hammered exposed concrete surface, produce the analogy to the landscape of the Würm valley and the relation of the floor plan to the exterior:

Cave-like openings in the volume of the constructed rock face characterise the new building and the lighting: The existing light conditions (the position of the sun on the property) and the lines of sight were used to calculate the coordination between the floor plan and the cave-like openings. The three openings enable direct sunshine at different times of the day.

The clear physical shape and the reduction to a few distinct materials create an interplay of seclusion and retreat, insights and outlooks. The room-high, glass-panelled clefts extend the interior outwards.

At the level of the monolithic “rock face”, no disturbing technical elements such as shuttering profiles, façade anchors or window elements are visible: the exposed concrete, here with a bush-hammered surface, becomes a constructed rock face, a mediator between landscape and plinth of the historical building, and the modern architecture of the new building interlaces with the historical building fabric and the landscape.

The spacious landscape of the property is captured with the rock face at the edge of the slope, the transition to the building, and gives the historical building its own plinth, which is used as a terrace.

The interior design with built-in furniture was also included in the floor-plan configuration.

The furniture surfaces are designed as room-high panels, and with a matt, white surface, these areas are part of the room concept and of the walls.

The white floor coating in the new building contrasts with the “hard shell” of the façade and the flooring of the historical building (herringbone oak).

With its clear structure and concentration on essentials, the house has a distinctive and powerful character, both integrating it in the landscape and preserving the autonomy of the historical building.