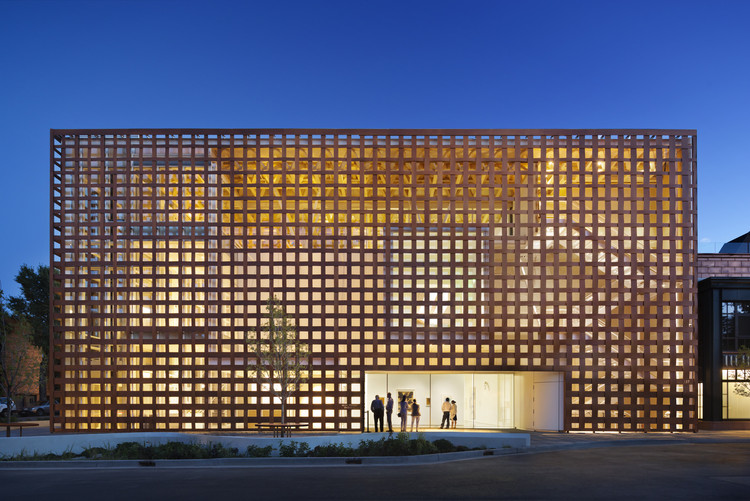 Text description provided by the architects. Located on the corner of South Spring Street and East Hyman Avenue in Aspen’s downtown core, the new AAM is Shigeru Ban’s first permanent U.S. museum to be constructed. Ban’s vision for the new AAM is based on transparency and open view planes—inviting those outside to engage with the building’s interior, and providing those inside the opportunity to see their exterior surroundings.

The main entrance is located on the north side of the building along East Hyman Avenue, which allows access to the reception area and two ground-floor galleries. From there, visitors may choose their path through museum spaces—ascending to upper levels either via Ban’s Moving Room glass elevator in the northeast corner, or the Grand Stair on the east side. The Grand Stair—a three-level passageway between the building’s woven exterior screen and its interior structure—is intersected by a glass wall dividing it into a ten-foot-wide exterior space and a six-foot-wide interior space. The unique passage allows for the natural blending of outdoor and indoor spaces, and will also feature mobile pedestals for exhibiting art. The exterior Woven Wood Screen is made of the composite material Prodema—an amalgam of paper and resin encased within a dual-sided wood veneer.

From the roof-deck sculpture garden, visitors will enjoy unparalleled vistas of Aspen’s environment and the only unobstructed public rooftop view of Ajax Mountain. The roof deck will also be an activated exhibition and event space featuring the café, So, a bar, and an outdoor screening space.

Other new AAM amenities include an education space, the AAM shop/bookstore, and an on-site artist apartment, as well as art storage and preparation spaces. The AAM Shop is collaborating with New York’s iconic nonprofit art bookseller Printed Matter to feature artist-produced titles alongside its own AAM imprint publications, as well as featuring a number of unique and collectible artist-edition offerings.

In recent years, the AAM’s annual attendance has increased by 110%, its staff tripled, and the institution has seen the number of students served by museum educational programming skyrocket with a 1,140% increase. A longstanding strategic goal for the AAM—the expansion of its facility and relocation to the downtown Aspen core—became a necessity.

In 2007, the AAM appointed an Architect Selection Committee (which included ASC chair and then-acting Secretary of AAM’s Board of Trustees, the late Frances Dittmer; 2007 AAM Board of Trustees President Nancy Magoon and AAM Board members Larry Marx and Gayle Stoffel; and AAM National Council members Stefan T. Edlis and Diane Halle), who unanimously selected Shigeru Ban (Shigeru Ban Architects) for the project.

In August 2010, the AAM moved forward with the acquisition of property at the corner of South Spring Street and East Hyman Avenue. A groundbreaking event was held on the new site on “Aspen’s Day” 8/16/11, and construction began in October 2012, with international construction team Turner Construction in the leading role, and a goal of completion established for summer 2014.

Construction of the new AAM facility and its endowment is 100% privately funded, with overall Capital and Endowment pledges of nearly $70 million raised—$45 million in building project funds and $25 million for the museum’s endowment. 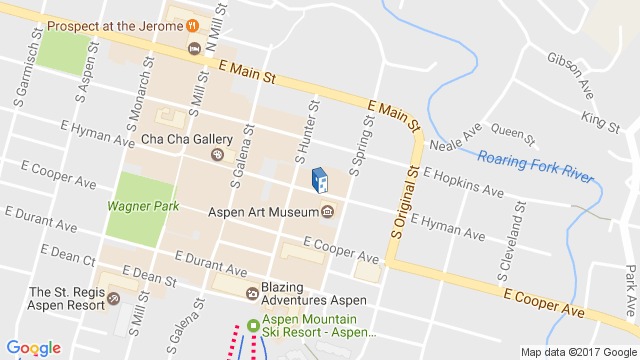