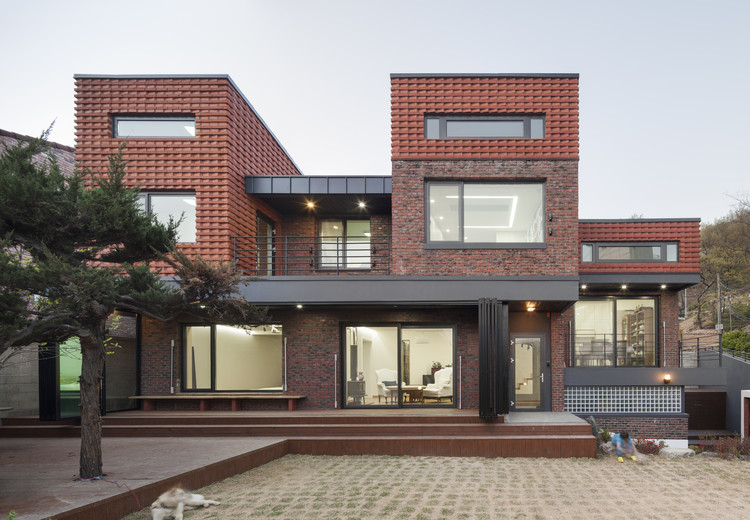 Text description provided by the architects. The Spatial Reproduction of Time

Space is projected by time, and time presents itself by constructing. Time leaves a trace with space, but the real space changes by the flow of time. If time is what really exists inside our consciousness, it is certain that we can reproduce it as a substantial figure. Architecture is the work of imagery of time we sense as an uncertain being. Therefore, architecture is historical as a meaningful process to present the diachronic and synchronic value of the being.

As Time is Piled up, As Books are Piled Up

“I have at least 2,000 books.” The building owners told me quite an interesting story while asking me for design. The owner couple’s hobby with many books was the main point of the concept as well as an attractive condition. The story about the books led me into the imagination about the exciting spatiality on the design. Just like the motif about the books, the existing building had an interesting spatial structure, too.

It was a detached house smaller than 40 pyeong, but the kitchen and living room on the first floor were skip-floor style, and the kitchen was working as a bridge connecting the living rooms on the first and second floor. Like this, the house was divided into two parts: the first floor for the first generation, the grandmother’s, and the second floor for the second generation, the owners and their children. It was very efficient spatial structure for the three generations to live in a one house. The kitchen connects the both places with its skip floor style. As the owners’ library filled with 2,000 books, time is piled up over the generations like the old books here.

The Harmony and Contrast of the Old and New Bricks

The bricks used in the existing house were those that were popular in 70~80s and but produced anymore these days. The trace of the age remains elegantly on the patterns and texture of the brick as the symbol of the history of this house. It was the goal of this project to use new bricks produced in 2014 on the extended parts of the trace from 30 years ago to present the past and the present at the same time as they are. In other word, it was supposed to present the temporal communication between the past and the present by using the modern bricks that have similar colors with the old bricks on the extended part covering the old ones. With this process, we can read the temporality of the building by its texture and communicate the emotion of time through the modern spatial structure.

Extension as the Path for Light and Air

The mass on the extended part with the new bricks is a kind of installing device where light and air flows, not just the simple extension of space. It has advantage of the new brickwork part which put on the upper part of the existing brick mass, it can take the regular intensity of illumination from the upper roof side with lighting by the borrowed light as well as the path of air making the air circulate to the upper part being heated.

With motor-operated window inside, it can also use energy more efficiently for the seasonal change, from summer to winter. It means that the layer of light and air which created on the upper part, lower the load of thermal energy of the building in overall and actively changes the inner space according to the diverse changes of the air. In conclusion, the newly extended pattern of surface is the reproduction of modern time and a reasonable alternative for more efficient circulation of light and air.

Space Where Time is Alive

The emotion and property of a material ultimately reconstruct architectural space. The memories of the past will revive by adding modern time to the past, and the modernized space would be remembered as another space of the past by somebody in the future. The emotion of time is, ironically, revealed as time is piled up to create the memory of the place. It means that the emotional place is not created by space well completed with expensive materials but by space where the emotion of time and space is alive to meet the present and the future.

It is to reveal the difference rather than hide, and empty the gap between the differences with the spatial emotion at the same time. In this sense, remodeling is concluded in the qualitative problem that what kinds of emotions it would reveal, not how to hide something. This project is about the architectural emotion created by the texture of these materials added by time. Moreover, the project tried to approach the matter on the new functional view to see this as the circulation of light and air, not just the simple spatial or quantitative extension.