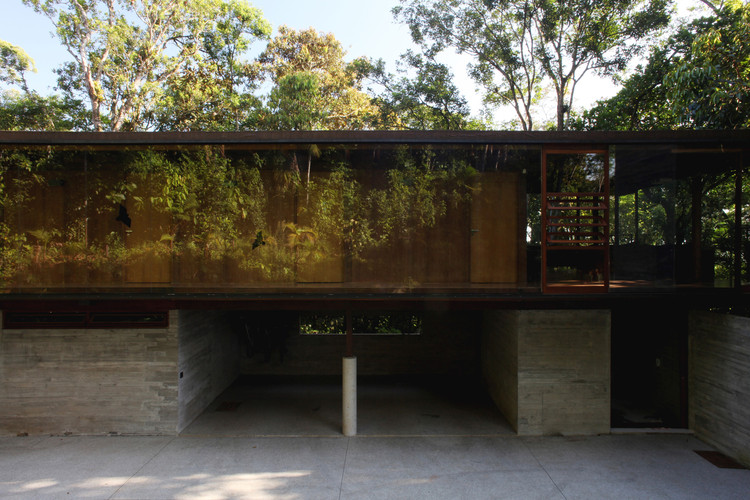 Text description provided by the architects. This house’s site has a privileged location: apreserved hill full of woods, in the middle of Joinville´s downtown. The access, through a soil road, reaches the maximum height allowed for constructions, from where the mountain background appears between the vegetation.

The declivity and the trees position suggested the implantation; resulting in a narrow building that follows the contour. This linear solution allows continuity between open and closed spaces at the ground floor level, in a direct relation with the site.

This lower floor, which includes the living areas, the pool and the service areas, is built with exposed concrete. It works as its own foundation and contains the land, protecting the house from excessive moisture.

A single longitudinal block shelters both internal and external staircases, and also a niche for fireplace, ­ovens, bathrooms and pantry. It is totally overlaid with burned cement with red pigment, a popular solution in this region.

The upper floor rests in the concrete base. Its construction was thought as timber assembly: prefabricated structure, floors, inters fence panels and rooftop. These work strategies ensure a quickly covered building site, avoiding restraints caused by constant rain. At both edges are located common spaces, a studio and a small living room. The bedrooms are concentrated in the middle of this floor. As an exception, a double height empty space connects both levels.

The volume cladding is a glass wall. This material is at the same time transparent and reflexive and stays, at the trees canopy level, naturally shaded and diluted in the forest.