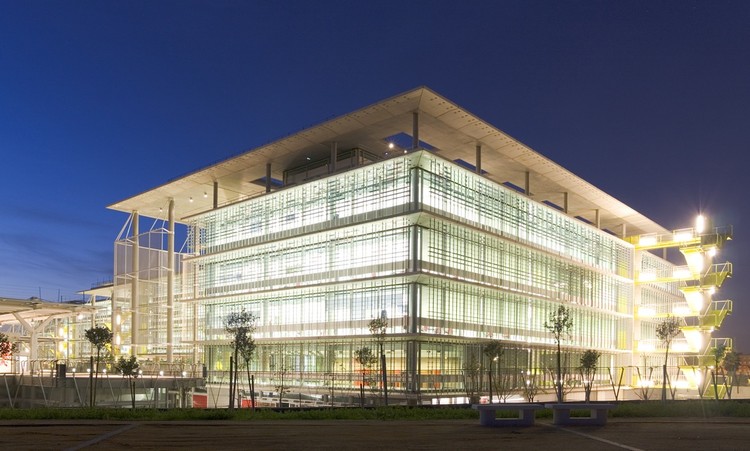 Text description provided by the architects. Abengoa is an international technology company whose primary activity focuses on sustainable development in the infrastructure, environment and energy sectors. The design for Campus Palmas Altas (CPA) – by Rogers Stirk Harbour + Partners and Vidal y Asociados arquitectos – aims to creates a new model for the business park, one that is not only more compact and urban in character than conventional business parks, but also particularly suited to the extreme summertime conditions prevalent in the south of Spain.

CPA comprises seven buildings providing approximately 47,000 m² of office space across highly compact floorplates in self-contained structures between 3-5 storeys in height. The buildings are arranged to either side of a central space which is made up of a sequence of interconnected plazas. Five of the buildings form Abengoa’s HQ complex, incorporating research & development as well as administrative facilities. The remaining two buildings will offer high quality office accommodation to a range of other tenants which have synergies with Abengoa.

In moving to the new headquarters, the company was keen to maximise communication and cross fertilisation between the various divisions of the Abengoa Group. Thus the central space unifies all seven buildings and – at the same time, because of the stepped arrangement – creates a sequence of discrete spaces each of which has slightly different characteristics. In this way, a variety of outdoor spaces ranging from patios to sunken courtyards and terraces, are created which – depending on the prevalent weather conditions – can be comfortably occupied by the buildings’ tenants virtually all year round. The organisation of these spaces aims to reduce the heat load on the building fabric and avoid the creation of ‘heat islands’ – especially important in Seville in the extreme heat of the summer . The visual mass is broken down by the landscape treatment of the spaces in between buildings.

Colours have been chosen that reflect the colours found in traditional glazed tiles in the Andalucía region – principally the cobalt blue to the underside of the glass louvres (the upper face is white to reflect light), the yellow-green to the external staircases and the red panels to the pavilions. The structure of each building is formed from in-situ concrete with pre-cast elements used for exposed edge cantilevers. The façades are of glass with a ‘floating’ horizontal transom of corrugated aluminium creating a small glazed panel at floor level. This aims to maximise light penetration; light is reflected off the floor surface, whilst reducing glare to the screen. Fixed glass louvres of varying densities (depending on orientation) shade the glazing.

Energy-saving criteria are applied across the whole design – from the site layout and the orientation of the campus to the geometry of the buildings themselves, the design of the building envelope and the selection of materials. Measures include photovoltaic panels, a tri-generation plant, hydrogen batteries, a Stirling Wheel and assisted chilled beams. The design of individual buildings and their linear arrangement maximises self shading, thereby reducing the amount of secondary shading required. The scheme is the first to be pre-certified as LEED ‘Platinum’ in Europe.

The competition brief established a very demanding construction budget of €848 per m² so at the outset of the project we identified a series of elements which we considered critical in order to ‘budget’ the limited available funds. These elements comprised the primary ‘surfaces’ that define the internal workspaces and external communal spaces namely: the false ceiling; the façades; the cantilevered edge; the external paving to the plaza and the public spaces at ground level; and the planting. The other building elements adopt a very basic and economic form of construction.

Once construction was underway, RSHP was able to secure some additional funding for the chilled beam system on the basis of a detailed life-cycle analysis of costs which demonstrated that the costs incurred would be recuperated within the life-span of the system.

For the plaza, the aim was to design a space which appears to form the ground level of the development, even though it is, in fact, a raised deck. The small changes in levels which work their way through the plaza break down the whole into a series of smaller spaces. As well as dividing the site, and thus providing some security for Abengoa, a fissure cuts through the middle of the plaza. This allows natural light to enter the social amenities located below the deck. As the only area of the site which does not have any buildings on or below it, the fissure permits the planting of large, mature palm trees.

Working with the manufacturer, the cladding design was adapted to enable it to be modularised. This approach significantly streamlined an extremely demanding construction programme and the period from the casting of the first columns on the ground slab to the time when the company President moved into his office was just 20 months.

The design of the CPA has been configured to optimise the benefits of the local climate, creating attractive external areas where people working in or visiting the offices can meet. It also supports the company’s vision to establish new working methods, similar to those which exist in many parts of Europe and North America (where 50% of Abengoa’s workforce are located). A wide range of amenities – including restaurants, nursery, medical care facilities and a gymnasium as well as open areas to walk and rest in – will help to enhance the quality of life for those using them. 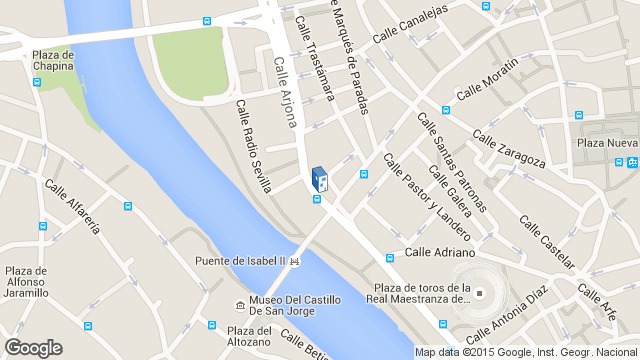