Set in the bucolic fields of Csórompuszta in the Hungarian countryside, the annual Hello Wood camp was recently back for its fifth year. Every year, students have one week to create wooden installations under the instruction of specially selected tutors, each of whom provide an outline idea of a project in response to a theme. This time around the challenge from the organizers was to "play with balance," which generated ideas that investigated the balance between opposing concepts - but also generated a whole lot of play, too. See all 14 of the weird and wonderful results after the break. 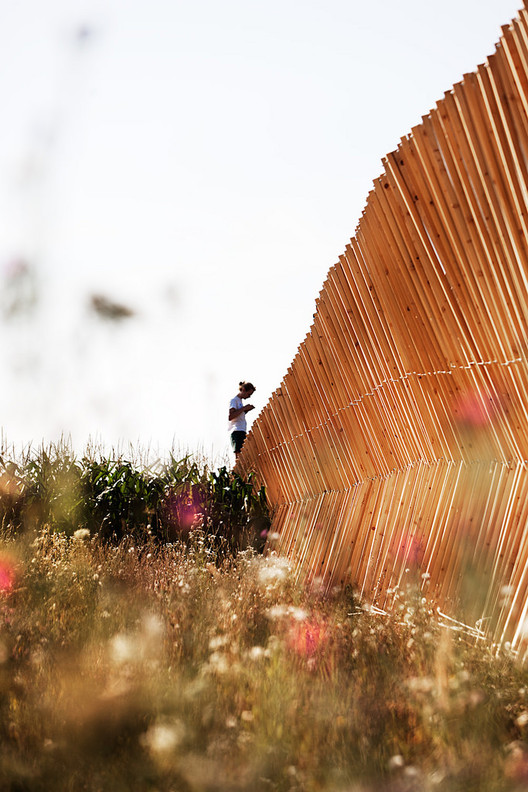 Led by Ákos Juhász (the new head of architecture at MOME, Budapest) and Dániel Eke (of KÖZTI), this site-specific installation features a ramp which rises above the cornfield, facing the point where the sun sets.

Using a simple repeating A-frame, which gradually modifies along its length to increase the height of the ramp, the piece creates a striking, powerful feature on the sloped site - that is until it disappears entirely into the tall plants. From a distance, users at the end of the structure appear to float above the crops.

The project leaders from Architecture Uncomfortable Workshop were fascinated by the act of playing games, in which a rigid and well defined space such as a football field gives rise to constantly changing, fluid movements by the players. Their aim was to explore the way pure elements of space balance with play - using simple and often small architectural elements such as a line, goals or even just some wooden sticks.

Throughout the week, they improvised new objects to play with, as well as entirely new games to play with them - with perhaps the most significant being a team sport which arose from the development from their unique goal design.

In a tongue-in-cheek presentation, project leader András Cseh (CZITA Architects) explained how his whole life had been leading to the day when he would design a spaceship out of wood. Leading the project alongside Jelena Pejković (Program director for Expeditio in Belgrade), their installation may not have gone to space but it did explore the balance between the low-tech material and a more high-tech structure.

The project featured six moving fins, attached to a central bowl by cables. 'Astronauts' inside can control these fins by rocking the bowl from side to side.

Led by Bence Pap (Studio Lynn) and Oliver Sales (DOP ARCHITECTURE), this striking tower was built to react to the wind, with a facade that, while securely fixed to the building, can wave in the breeze. The tower also explores the balance between interior and exterior; with a neatly organized interior of platforms and ladders adorning a clearly visible structure, but an exterior facade which appears to be almost entirely chaotic.

Building on her work in parametric design, Biayna Bogosian (Somewhere Something) devised this project to explore the balance between hyper-modern design techniques and craft construction in traditional materials. Working first "to design a system, rather than the object itself" their design was ultimately generated by the landscape of the site, once its variables were entered into this system.

This project envisaged by BLOKK Design Studio and Spora Architects resulted in a giant string instrument, which can only be effectively played by a group of people working together as a team.

The design aims to evoke a feeling of ritual or ceremony in the participants, similar to the function of concepts such as the native american totem pole, which "restore the balance between people and nature."

This installation led by Pep Tornabell (CODA) played on the flexibility of thin strips of wood to create a lightweight but self supporting structure that expresses the balance between the strength of the wood and the force of gravity acting upon it.

Salvador Gilbert Sanz (EMBT Miralles Tagliabue) initially set a challenge for this project that they would use no screws, nails or other non-wooden fixings. In addition, they would only use two different section sizes of wood, one for the structure and another for the platforms.

Despite this, they created a form of relative complexity, providing a platform that weaves its way among the trees to offer views of the setting sun.

This madcap project led by Mjölk Architects features a hexagonal 'hangar' which is the base for a floating cloud: assisted by a fire lit at the center of the structure, a fabric balloon rises from the hangar's hollow middle.

Suzana Milinović and Rufus van den Ban devised this structure to provide relief for students who have been working in the hot sun all day, both at this year's camp and at future editions of Hello Wood.

Starting with a roof capable of storing water, they worked with the fact that a wooden tub is inevitably going to leak - catching these leaks and channeling them into an improvised arrangement of baths and showers fixed to the structure underneath.

Project leaders MOOMOO Architects challenged themselves to use "the balance of the wasted material at Hello Wood," deciding not to order wood in advance like the other teams.

Using only the waste created by other teams, they created two walls of leftover scraps, with a distinct contrast between the sharp and chaotic outer edges and the smooth surfaces inside, where each individual piece collected is legible.

Elias Lindhoff and Sebastian Mardi wanted to test the possibilities of wood by creating something that was almost like a fabric, creating an accordian-like structure that extends under its own weight.

Using the concept of a tree as inspiration, this leightweight shading structure is balanced by a heavyweight supporting 'trunk', together creating a space which offers shade to its users.

This team, led by Architectural Artist Frank Havermans came up with a truss structure inspired by traditional Hungarian barns, but adapted to take on a modernist aesthetic.

Aside from being literally unbalanced, the design also balanced the traditional barn inspiration with modern materials, as the structure was made of plywood and fixed in place with steel cables. Another important aspect of the project was the traditional communal event of the 'barn raising', where students would get a feel for the extreme weight of their structure, something that they don't experience in a university setting.

This year, Csaba Hatvany took the role of 'resident artist', in more ways than one: he is actually one of the owners of the site at Csórompuszta and lives there permanently. His tumbleweed structure may look improvised, however it is in fact underpinned by complex geometry.