This article was originally published on August 2, 2014. To read the stories behind other celebrated architecture projects, visit our AD Classics section.

Hidden in the middle of the forests surrounding Arkansas’ Ozark Mountains, Thorncrown Chapel rests amongst the oaks, pines and maples. The humble chapel, designed by Euine Fay Jones, is less than 35 years old – yet it’s on the U.S. Historic register, has been named one of the AIA’s top ten buildings of the 20th century, and has even been called the best American building since 1980. 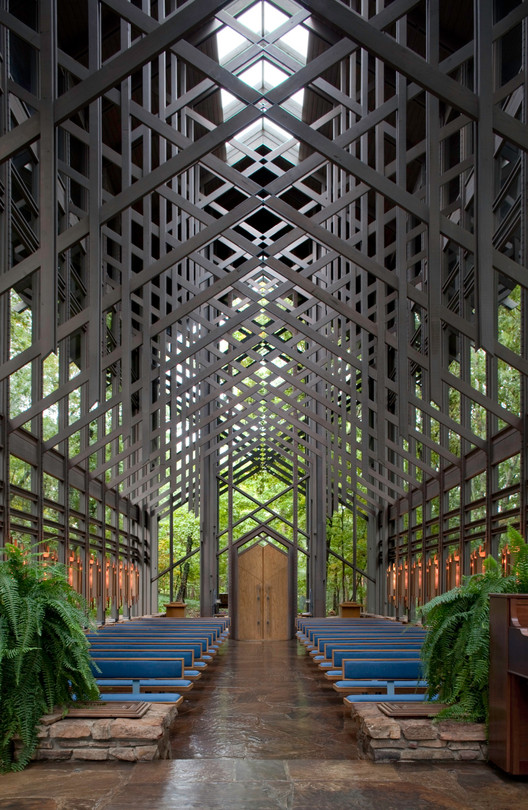 In the late 1970’s retired schoolteacher Jim Reed purchased the property where Thorncrown chapel would be located - originally as a space for his retirement cabin. But, after seeing tourists stop along the highway to view the beauty of the area, his vision changed. He imagined a non-denominational chapel, a spiritual place -- one that Jones would later describe as a "place to think your best thoughts." Perhaps its simplicity is what draws over 2000 daily visitors –it is architecture that everyone, not just architects, can understand and appreciate.

The remarkable glass and wooden structure was dreamt up by E Fay Jones while he was both practicing in Little Rock and working as Dean at the University of Arkansas School of Architecture in 1978.

With over 425 glass windows and a repeated column and truss structure, the vertical chapel is like a "forest within a forest," reaching 48 feet high, 60 feet long and a mere 24 feet wide. A central skylight allows generous portions of light to spill through onto those below. Custom lanterns adorn each column and at night reflect off the glass – as if they were lit somewhere off in the forest.

For Jones, the process of construction was just as important as the final object. His practice was unique in that he employed not only young architects, but craftsmen, such as stonemasons and carpenters, whose influence is evident in the Chapel. Every truss was made of local pine – “no larger than what two men could carry through the woods.” 2x4’s, 2x6’s and 2x12’s were assembled on site and subsequently erected, leaving minimal site impact. In fact, the only visible steel in the project is the diamond-shaped patterns centered in each truss.

Born in the small town of Pine Bluff, Arkansas in 1921, Jones never had the desire to become as famous as his close friend and influence Frank Lloyd Wright. Indeed, perhaps the words at the entrance of Thorncrown Chapel encapsulate E Fay Jones and his humble architecture best: Please Come In And Sit Awhile, Just As You Are.