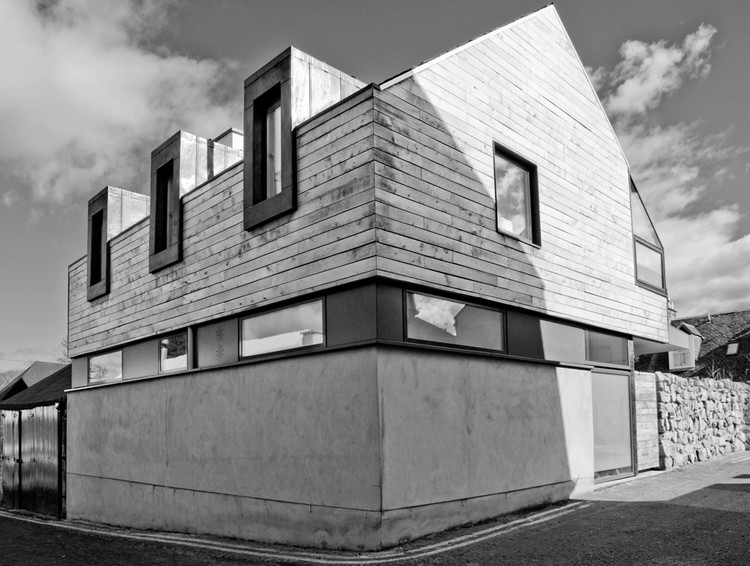 Text description provided by the architects. The Japanese House is a modest family house and studio in Edinburgh designed and self built by Konishi Gaffney architects. The site was a small 200sqm brown-field site, formerly a mechanic’s garage, on a back lane in Portobello. The site had planning permission for 2 flats and the process which led to this planning permission had formed a number of restrictions including maximum eaves height and pitch to the roof.

The congested and overlooked nature of the site required careful articulation to provide privacy while still allowing sunshine and passive solar gain into the house. The house turns its back on the lane in order to protect privacy within the house. To the East and the garden three large sliding glass doors all slide out the way to form a 5.5mx2.4m opening to the garden. These windows open the house up to early morning sun, starting the heating cycle.

To the South, to the lane, a large glazed corner brings South light and warmth into the heart of the house. Sunlight falls diagonally through a double height space onto the concrete floor, used for its thermal mass. Strip windows to the ground floor provide privacy and articulate the house as floating over the high garden wall, a typical Portobello arrangement, which continues as a strip around the house. Internally this is expressed as a narrow picture rail shelf at 1800mm.

The house is modest and restrained. It performs an urban function by completing the mews edge and fulfilling what is likely to be an end of terrace role as the adjacent gardens are developed over time. The roof is slate to match the surrounding buildings. It has a chimney - a wood burning stove - to add visual interest to the skyline.

Our intention was to build simply and cheaply. The house is timber framed with a concrete base to protect from vehicular traffic, similarly gutters and downpipes are recessed for protection and to create a clean aesthetic. Details are simple with butt joints and unpretentious junctions and a general avoidance of shadow gaps or cover strips.

Local materials were selected throughout, for example Scottish Oak used for the cladding and sliding glass doors came from a small timber mill less than 20 miles away. Recyclable materials were used where possible such as aluminium gutters and downpipes, and concrete for the floor was selected with careful weighing up of the energy cost versus benefits.

The house is super insulated and, in spring, summer and autumn while the passive solar cycle functions, requires no heating. In winter under floor heating is proving comfortable and efficient space heating while top up heating is provided by a wood burning stove.

We were interested in the variegation of space in Japan from the core of the traditional house to the outside through a series of ambivalent spaces, the internal Engawa and the outer Nuri-en. We used a Nuri-en to make an outside covered space and to blur the distinction between outside and in. The sliding doors are set flush into the concrete which flows outside to a narrow strip. A flat roof overhang protects this space from weather, allows sliding doors with brush seals and facilitates such daily life such as washing to be hung outside on rainy days.

A key element of the design was a central pillar, called a Dai Koku Bashira 大黒柱. Literally a big 大 black 黒 pillar 柱. This is traditionally located at the centre of the house near the kitchen. The main structural support for rural houses in Japan, it has symbolism rooted in the Shinto religion. Daikoku being the ‘God of wealth, fortune and the five cereals’ was held to reside in the big black pillar. Our Daikokubashira was also to have more pragmatic function: somewhere to carve our 3 children’s heights, to mark time, as they grow up in this new house. The post we used was locally sourced; a 100 year old oak tree which had fallen as a thinning, crowded out by it’s neighbours, about 80 years ago. The sapwood had all rotted away and after man handling the log into position and charring it to blacken it we simply cast it into the polished concrete floor to support the house above.

We cast in the floor a low concrete kotatsu table with below ground heating. Upstairs we installed 4 tatami mats in space intended for tsukimi or moon viewing. At the entrance we created an Engawa for separation of the private parts of the house from public scrutiny; we have a wide-narrow-wide transition on entering the house and an office space that can be accessed by visitors without entering the house proper.

This traditional cladding technique, using charred cedar boards, was used to waterproof, protect against rot and reduce the flamability of timber cladding. Having experimented by charring our oak post, we continued with this technique on an area of timber cladding at ground floor level and are monitoring its performance. 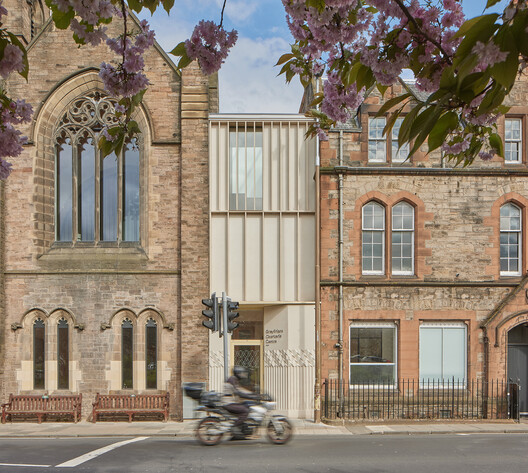