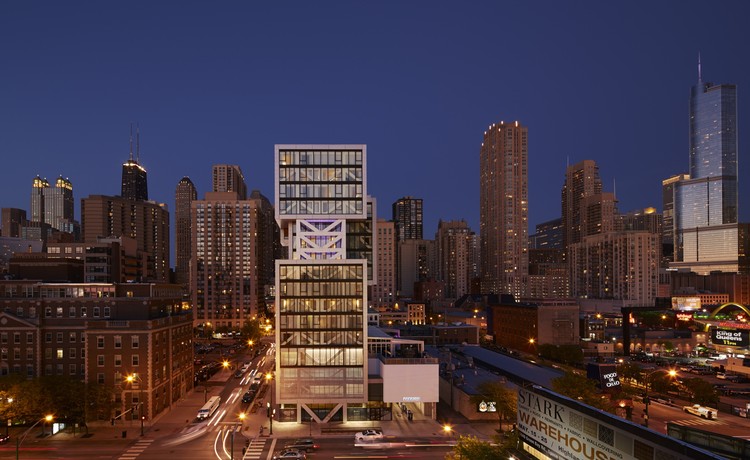 Text description provided by the architects. In early 2004, VDTA was commissioned to design a 16‐story extended stay suites hotel at the corner of Lasalle and Huron Streets in Chicago by the site’s original developer, Duke Miglin. It was his desire to employ a staggered truss structural framing system for the building – something new to Chicago – for its speed and efficiency of erection. Construction began in 2007 but the project fell victim to the economic downtown in 2008, topped out with just the first components of exterior cladding installed. For three years the partially constructed structure sat, a rusting, tarp‐wrapped reminder of the Great Recession, an eyesore on the skyline dubbed “The Mummy” by the neighborhood’s residents.

Realizing the flexibility of a staggered steel truss system's full building width spans afforded by the staggered spacing of the trusses, the unfinished existing structure was easily re‐planned for The Godfrey to provide 221 guest-rooms, spa and fitness facilities, street level lobby and hotel support spaces. In addition, the design team extended the utilization of the 4th floor level out onto the rooftop over the parking podium to create a 15,000 SF indoor|outdoor urban roofscape. All-in-all, the revised program is a significant change from the building’s original extended stay suites/low amenity concept.

LaSalle Street starts at the Chicago Board of Trade in the heart of Chicago’s downtown and ends at the lakefront in Lincoln Park, one of the city’s most historic residential districts. The Godfrey is a marker on the Lasalle Street skyline vista, separating these two very different areas. It is the last landmark of the city’s modernist precinct, reveling in the messy vitality of urban core, before the more restrained fabric of Lincoln Park’s neighborhood begins to dominate.

Modernism is all about de‐materialization – denying the expectation of the mass of the building. This effect defines a certain sense that the world is indeterminate, ambiguous, and filled with the unexpected, a view which gains more and more currency every day. Over time modernism has come to be symbolized by certain forms – the cantilevered roof plane, the unsupported edge of a floor deck, the horizontal ribbon window. What was once unexpected has now become the expected and ordinary.

The design of the Godfrey Hotel is a continuing exploration of modernist forms, but this experiment looks to a more muscular approach where the juxtaposition of huge yet apparently weightless masses rest on a gracefully balanced structural skeleton reasserting the indeterminate, an ambiguous condition of modern times in what is a truly unexpected way. The taut metal skinned building forms that shift inward and outward to reveal the expressive structural frame are intentionally daring and honest, a real “Chicago” building, linking to the city’s rich past of architectural innovation.

The form of the Godfrey Hotel is an expression of its staggered truss structural system invented by William LeMessurier in 1966. In this system, story high steel trusses span across the full width of the building and are staggered from floor to floor. Precast planks span from the top chord of one truss to the bottom chord of another truss on the floor above. This system is very light in weight, can be erected rapidly and has a very low floor to floor height.

It also is a system where the deep trusses allow a remarkable freedom to express the program of the hotel, where today’s guest is looking for that unique room satisfies their unique needs and preferences. From its base the building form is offset three times, creating rooms of varying depths, creating 26 different room types for a hotel with 221 keys. In addition, the long span trusses create large clear span public and amenity spaces on the 4th floor.

The structural system allows the design to celebrate the human variability its guests, expressing this fact with a form that seemingly defies gravity obeying its own fuzzy logic. It is the exception, along LaSalle Street, that proves the rule that all tall buildings should be boxes no matter what their function. 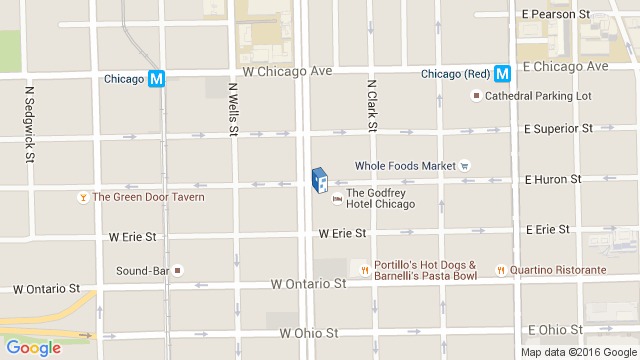 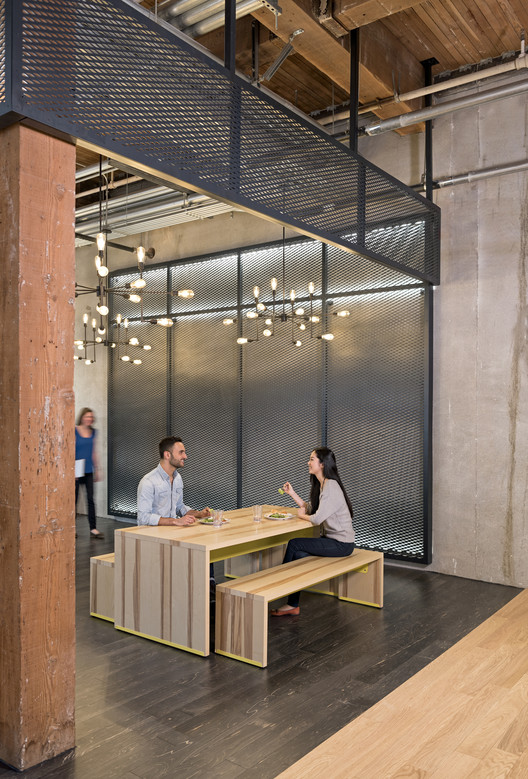 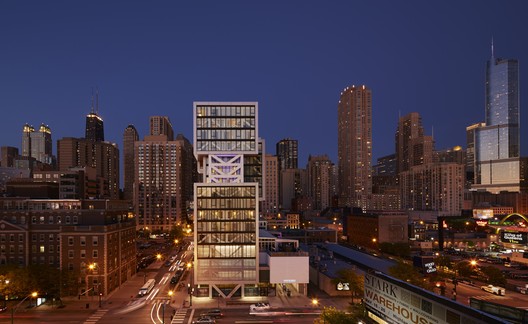