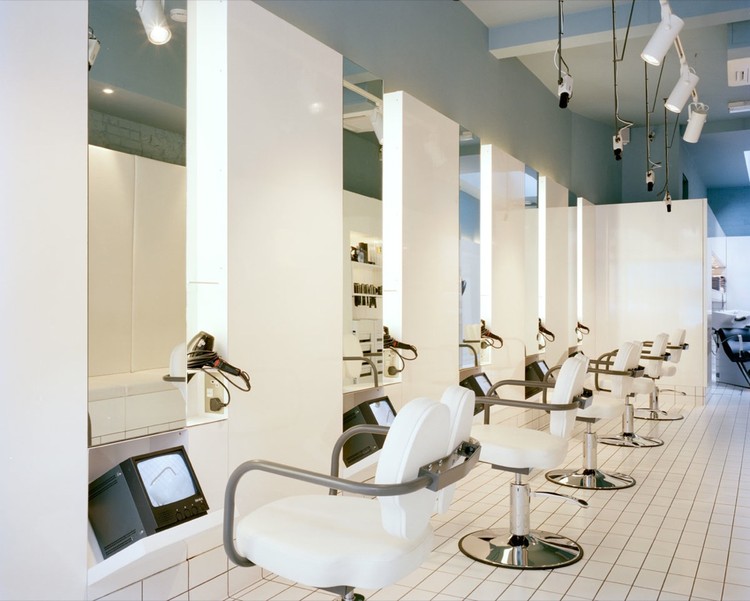 Text description provided by the architects. The original Klinik Hair Salon, completed in 1998, was one of our first projects, and although small, it was important in that it helped to define how the practice started to explore certain themes. We started to experiment with drawing references from different worlds - in this particular instance a medical and utilitarian world, in order to create a space that was strangely familiar yet ambiguous. By using a language borrowed from a different realm, we set out to invite a more playful interaction with the space and enhance the experience of visiting a hairdressers.

We used recognizable forms and materials that began to allow a sort of hybrid space to emerge: The waiting bench was a hybrid of Chaise Longue and Hospital Bed; White leather and tube Steel was consciously chosen, as was the nostalgic waiting room analogue clock.

Although utilitarian, the intention was always that the result should be aesthetically pleasing and suggestive. In a way we created a fictional space that was made up of elements that refer to other worlds.

CCTV was a playful intervention which added a voyeuristic dimension to the whole experience. Cameras positioned above each chair allowed a view of the cutting process on the monitor, setting up a situation where one became distanced from the experience through the mechanism of the camera. They also permitted a view that one is never usually able to see which is the back of the head throughout the process, so the cameras empowered the viewer, (and extended the possibilities for monitoring what was taking place).

This process allowed a latent narrative to develop which helped us to design and create the space. This does not necessarily demand a literal reading, but rather it is an invitation for playful interaction between the space and it’s users.

The design approach for the second Klinik Salon was a continuation and extension of the original ideas. Here we wanted to further explore the idea of a filmic space, as if inviting clients to step momentarily into a different world. It was a specific requirement of the brief from the client that this second salon was to continue the same themes aesthetically, but in a refreshed manner.

This project had particular site constraints which we responded to by extending the interior space, connecting the front shop area with a rear store room via a new side extension. The extension formed not only a connection, but created additional internal space which made the project viable. This approach created a very long and narrow plan, which we countered by the introduction of white gloss wall panels, which line the length of the salon, creating a reflective surface which visually extends the width of the space.

Although a decision was taken early on that everything below the datum of the wall panels would be white, we played with different textures and pattern within this. So the reflective walls are countered by matt leather upholstery, and the utilitarian tiles introduce a grid in dark grey grout, which visually extends the space in the long direction.

Another challenge we faced was getting natural light into the centre of a very long space with a narrow shop front and very narrow rear exit. The new extension allowed us to design in a large skylight, which not only floods the centre of the space with natural light, but is placed to allow a view of the sky from the backwashes.

The shopfront was designed to form a framed view of the interior of the shop, with thick black structural tape bonding the glass to what appears to be a thin and elegant white powder coated steel frame. This detailing allows only the 5mm thickness of the steel angle frames to be visible around the glass. 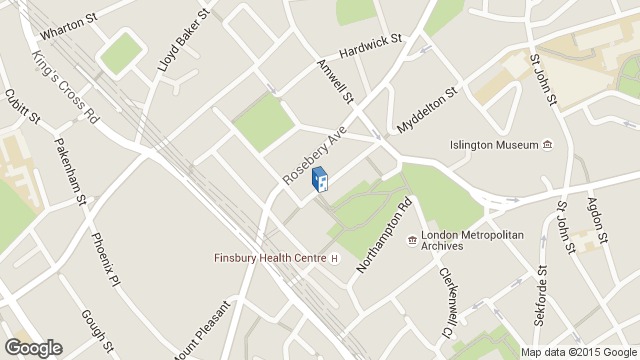 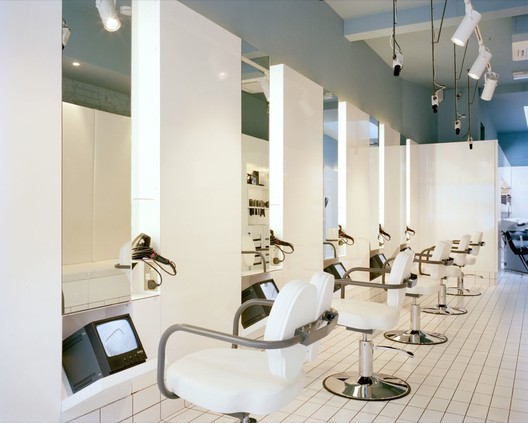