Save
Dubai Plans Mall of the World, the First Ever 'Temperature Controlled City'
Share
Or
Copy

Developers Dubai Holding have announced their plans to build the 'Mall of the World' a new 48 million square foot tourist district in Dubai that will host the world's largest mall, a new cultural district, a theme park and 20,000 hotel rooms. What's more, the district's 7km street network will be covered by a retractable roof during the summer months, creating the world's first "temperature controlled city".

Read on after the break for all the details 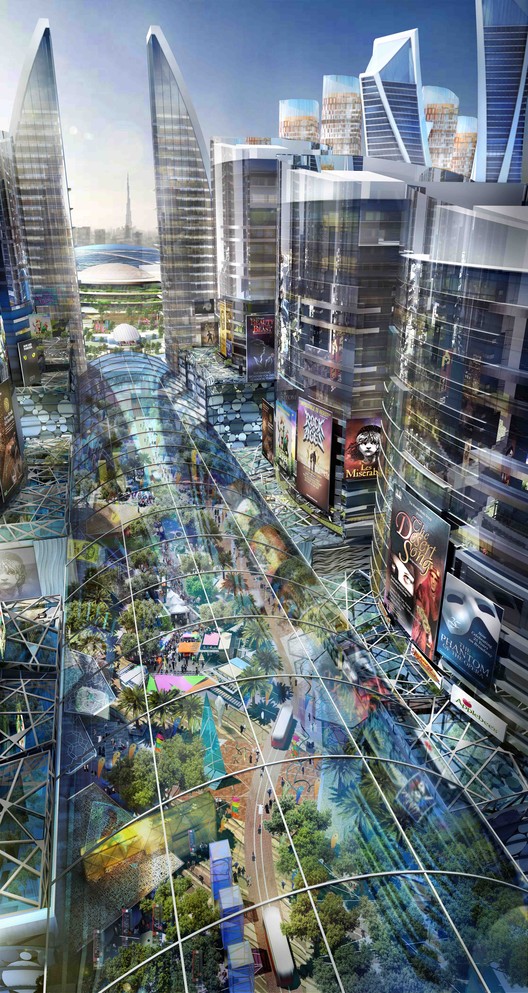 Located on Sheikh Zayed Road, the Mall of the World is planned to cater for 180 million annual visitors, with the roof extending Dubai's normally seasonal tourism industry into the hot summer months. "Our ambitions are higher than having seasonal tourism," said the UAE's Prime Minister Sheikh Mohammed Bin Rashid. "Tourism is key driver of our economy and we aim to make the UAE an attractive destination all year long. This is why we will start working on providing pleasant temperature-controlled environments during the summer months. We are confident of our economy’s strength, optimistic about our country’s future and we continue to broaden our vision."

The plans for the Mall of the World include:

Ahmad Bin Byat, CEO of Dubai Holding, said: "The project will follow the green and environmentally friendly guidelines of the Smart Dubai model. It will be built using state-of-the-art technology to reduce energy consumption and carbon footprint, ensuring high levels of environmental sustainability and operational efficiency."

Mohammed Abdullah Al Gergawi, Chairman of Dubai Holding, also noted that they plan to develop the complex in phases "in alignment with the gradual growth of family tourism in Dubai," with one spokesperson telling Reuters that it will require Dh25 billion ($6.8 billion) in investment over the next 10 years.