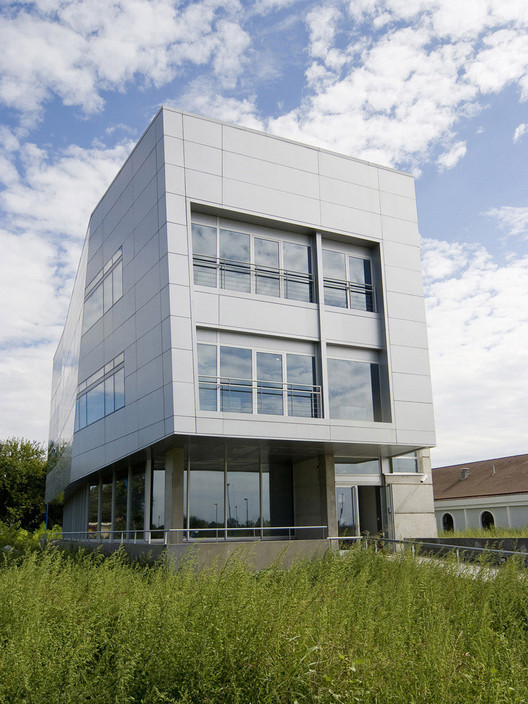 Text description provided by the architects. In 2006, the Client started a revitalization process of the existing laboratory complex in order to adapt existing space for the new equipment donated by the European institutions. The existing labs and workshops were subjected to adaptation and the old Headquarters building was completely demolished in order to build a new one in its place.

Acting as a freestanding form in an open space, the new building establishes various visual and semantical relations with its artificial and natural surroundings.

Metaphorical statement of the building deals with a phenomenon of scientific research and its importance within contemporary society. Its spatial structure is composed as a group of visual / spatial frames that form a general impression.

The new structure is based on a dual character; two opposite elements were put together while their relation defines the attitude towards existing surroundings. The first one is rough and brutal in its visual expression, made of plain concrete, housing main hall and oriented towards existing labs. Designed as a perforated wall, it acts as a barrier to overheating of the interior space and more importantly, to the rigid and inadequate architectural language of the surrounding labs and workshops. On the opposite side of the concrete wall, a light aluminum / glass structure is developed, housing the office space. Light in its visual character, it virtually floats over land surface; easy distortion in the front, generated by way of space exploitation, supports effects of dematerialization and sfumatto effect of the architectural composition as a whole. Apart from the above mentioned, distortion detail establishes an ironic remark on the ideology of the modern movement and international style. The reflection of landscape facing the broken glass / aluminum surface of the office space also expresses an aspect of the relationship between nature and advanced, contemporary technology.

Interior space is double coded, visually integrated, and yet segregated by its spatial functions. Adaptable in its structure, it consists of two main layers: one containing the office space and the other space where communication and auxiliary rooms are placed. Between the two there is a multistory main hall. Thus, the interior space may be visually comprehended as one content. The layer containing the offices is oriented towards open surrounding space of natural sites; the halls and communication traces face surrounding buildings.

The complex has been built by the government and directly serves the needs of global community in Serbia and wider region, wherever food products are exported to or imported from. Being within the system that provides sanitary and health safety, it influences broad level of social standards and community life. On the one hand, this is due to financial potential of the Serbian society. On the other, it refers to the authors’ comment on Serbian attitude towards contemporary sustainable systems; too advanced for Serbia that considers itself to be too poor, humiliated and schizophrenic. Before it can dream of European standards in contemporary sustainable doctrine, it should rise above by materializing structures of classical mode technological image 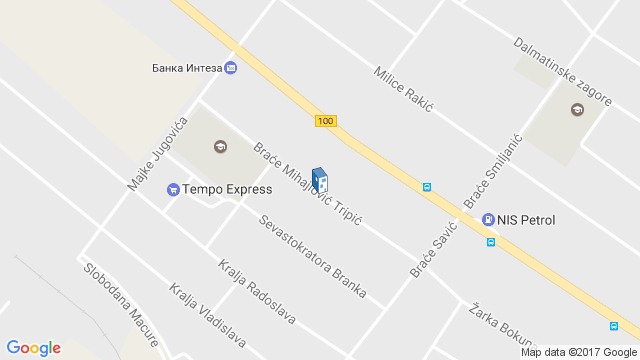