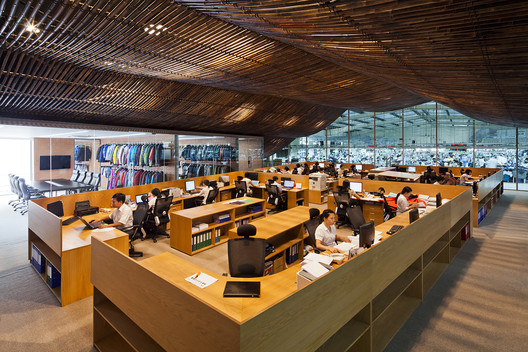 Text description provided by the architects. This is a factory renovation project of Viet Vuong Co., Ltd., a garment firm located in Ho Chi Minh City, Vietnam. Textile and garment is one of the biggest industries of the country, where more than 4,000 apparel manufacturers operate mainly for export markets. The aim of the project is to redefine the company's identity through renovation in order to stand out among their competitors.

The existing factory is a two-story steel building (25m x 90m). The refurbishment is concentrated on two sections, one on the upper floor for administrative office and another small one on the ground floor for the reception. The remaining space is left for manufacturing work that was kept operated even during the construction period.

A theatrical juxtaposition of the existing factory and new office is proposed to emphasize the well-managed factory environment and its dynamism, say, a spectacle of 1,200 skillful workers sewing numerous ski-wear in a tropical climate. The central administrative office space is designed as a passageway. By opening up a large window on its existing envelope, this passage conveys insight view to the factory space which was formerly mostly enclosed. The large glazing between the factory and the office enhances the communication between administrative staffs and factory workers.

Closed rooms, such as the directors' rooms and meeting rooms, are positioned along the aisles of the central office space. These rooms and the office are separated by transparent glass partitions, which showcase the company's products and samples like shop windows. These glass partitions are positioned at an inclined angle in plan view to create rooms of different sizes behind them as required. The ceiling of the central office is also inclined from the factory side toward the exterior to reduce the volume of air-conditioned space as well as to magnify the perspective effect.

Local materials are used throughout the project such as exposed bricks and bamboos to express the local identity and environmental consciousness. A pliable bamboo ceiling, concealing mechanical equipment and lighting fixtures, is designed for the central office space to simulate a textile surface. A part of this bamboo ceiling flows into the ground floor and becomes the ceiling of the reception area to welcome the visitors.

Stainless wires are attached to existing facade and covered with bougainvillea. The warm natural materials and greenery provoke a stark contrast to the existing steel structure of the factory. 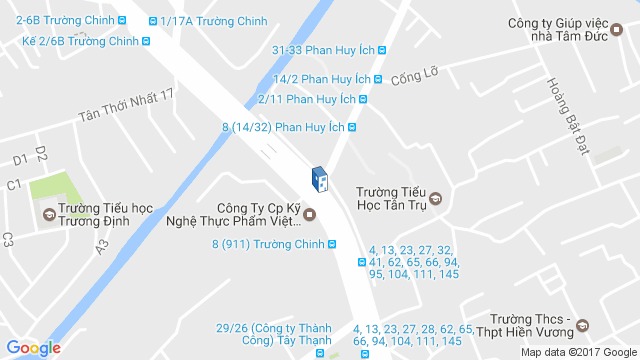