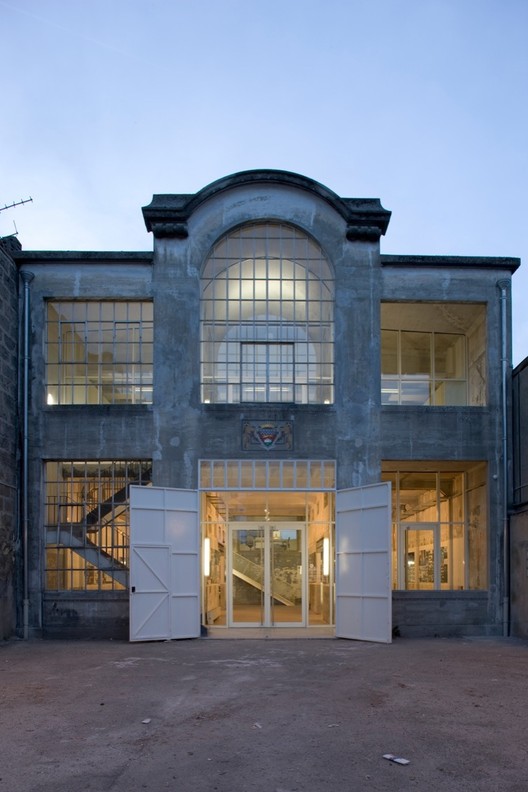 This building, formerly used for the transformation and distribution of electrical energy, is considered as the unchanging soul of the project due to its mass, the frankness of its architecture and the brutality of its matter.

Its interior shell remains intact. This project complements the existing design, it is a new layer and a new story. Contemporary interventions have systematically used white. The courtyard is an outside event area; it is an area in which a prototype, a model or a container can be displayed or a celebration organised. It is an available outside area, large, unoccupied and with direct vehicle access from the avenue.

On the ground floor, the space between the two façades becomes a covered entrance to the exhibition hall, on the first level, an unexpected loggia directly accessible from the Supervisory Council hall, gives an uninterrupted view of the avenue and its activities. The existing staircase is retained, providing an agreeable place for discussion and waiting before entering.

The top floor is cut out in the centre of the former factory: This is the empty space overlooked by all offices. It is a vertical traffic area, staircases and walkways serve the three upper levels. This is the “inside facet” of the offices, the core of the activity, tête-à-tête meetings, group work. Each office, running from one side of the building to the other, is double-oriented allowing natural lighting and air circulation.

Users are grouped in the same "house." The available volume in the silos formerly occupied by the transformers is optimised: Access to conference and training halls, ancillary and storage rooms on the ground floor and ten wooden floors in the upper levels dedicated to office space.

The extension covers the entire plot to the north and complies with applicable property limits. It is a single-story, metal-framework building with a height of 5 metres in accordance with joint ownership regulations, which curves between the conference hall and the offices of the Aquitaine Architects Training Centre, thus generating a supply of light, following the inversed double slope of the roof to the offices located in the silos and to the very heart of the building.

The façade and roof are clad with white corrugated iron sheets. The entire building becomes a double-oriented through space, limited by one façade at the north end and one at the south end. The shell of the existing building was insulated from the outside. The extension was insulated by means of double-skin cladding.

The existing façade plays the role of a double frontage that protects, on the south-facing side, the new façade, which consists of an all-height glazed curtain wall designed to obtain maximum light in the exhibition and work areas. On the north-west side, adjustable sunshades provide protection from the sun at the end of the day.

In the existing building, heat is produced by a gas boiler. The radiators are equipped with fans in the most voluminous areas in order to increase efficiency. Each office is equipped with an independent radiator and an opening window. In the extension, a double-flow air conditioning unit ensures air-renewal and hot-air production. In summer, this system can be run at night to cool down premises that are not air-conditioned. Training and conference halls are equipped with opening windows to favour natural air circulation. 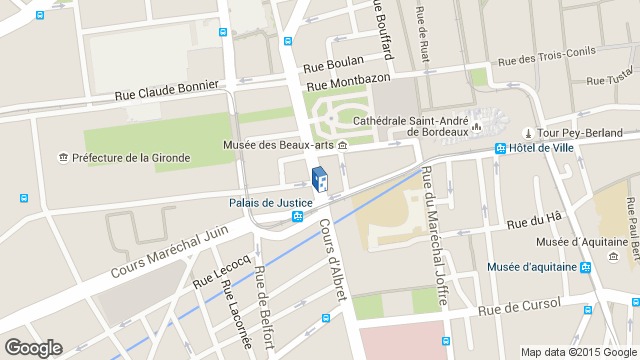 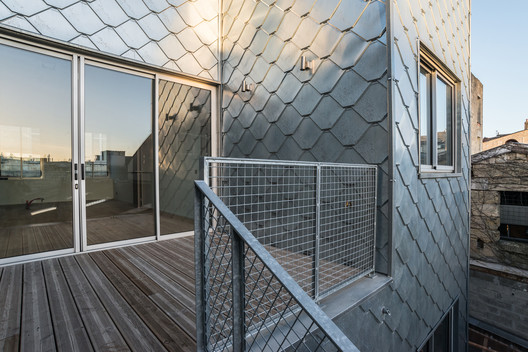