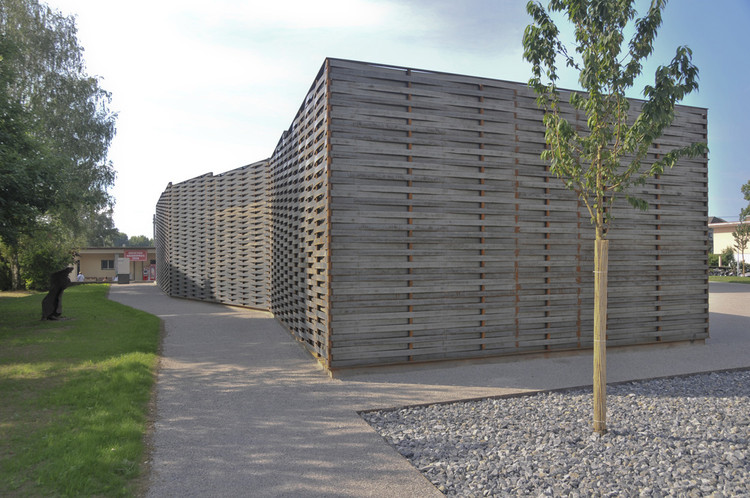 Text description provided by the architects. Art - Location / Awareness of a "new" location

The project proposal aims at a holistic view of the Kunsthaus entity, but equally taking its near as well as its extended urban architectural surrounding into consideration.

The proposal looks in particular at the fact that the existing Kunsthaus plays an important role on a prime location between the southern train station and the pedestrian path leading from the train station towards the central area.

A gently enclosed body in the east of the plot, on the location of the former bathhouse, defines the given structure at the Bahnhofstrasse and forms with the existing Kunsthaus in the northwest a clearly demarcated external space and sculpture park respectively, towards the city. The new entry at the  southern train station clarifies and strengthens the significance of public space of the new Kunsthaus. We interpret the gentle construction form in the sculpture park as on the one hand a reference to the former and on the other hand as a stage for existing and future sculptures. Several public entrance possibilities into and around the new Kunsthaus are intended to ease the fear of an art visit.

The Kunsthaus receives through the new entrance to the southern train station a new address. The synergy between train station, road and museum square transforms the area into a turning point and meeting place. The extension with its glassed-in entrance lobby and the working space at the "front" gives art the necessary presence and opening and thus stimulates curiosity and encourages an art visit.

The new column-free exhibition space on the entrance level intended for temporary exhibitions, allows for highest possible flexibility with mobile exhibit walls. Garden doors open the view towards the sculpture courtyard and are at the same time well placed exits for exhibitions that are combined with the external space.

The anthracite coloured cement floor, the white wall, and ceiling covering make of the mostly artificially illuminated space a balanced entity. The slightly bent walls guide the visitor on his/her tour. The basement serves as storage and workspace and ensures adequate storage of the national graphic art collection.

The connection between old and new construction ensures unhindered access for persons with disabilities. The existing lavatories were adapted accordingly. The Girardhaus is preserved within its flow and continues to play a main role.

An enclosed massive structure is the core construction of the actual art space. The static is visible through the changing width and with the increasing height of the bearer. This perception of proportional unity with the existing old structure is further strengthened in the lobby with a widening space. The ceiling-high glass finishing towards the train station symbolises - like an open mouth - the entrance lobby. The façade, braided with raw 5/100 mm steal stripes, evokes different associations. The braided stripes cover the building just like a screen from three sides and emphasize its utilisation towards the outside. The oxidation process, which is slowly setting in, colours the building with a velvet-orange glimmer thus likening it to the train station area. The braided façade may also be seen as a fence, which converts the outer space to a new sculpture area.

With this in mind, we are looking forward to various images and interpretations that arise within the imagination of a visitor.

The projected park area is foreseen as art-location and consists of public and freely accessible spaces. The planner deliberately chose not to establish pathways. The solid gravel square houses the Kunsthaus entity, but also sculptures that are arranged freely and allow visitors to view them from every angle. Gravel beds with geometrical lawn arrangements and fruit trees characterize the square that is freely visible from the road. Various entries and throughways encourage walks or brief moments of rest within this oasis of art.

The museum square to the south is marked as a public access way through the cover of stone plates. The existing garden wall towards the Bahnhofstrasse remains as before; however, a ramp completes the access to the garden through various pathways.

The connecting road in the east, from the train station to the city centre, is part of the entire system and is connected to the existing green space with a green belt. 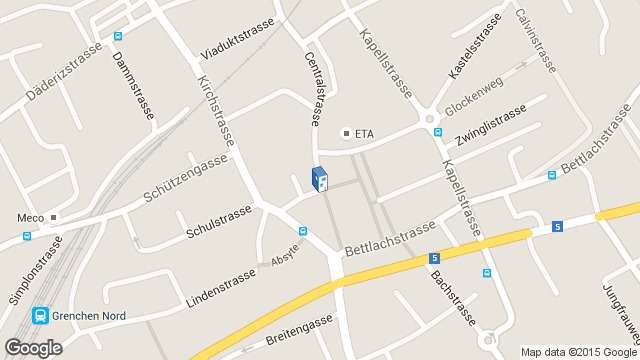