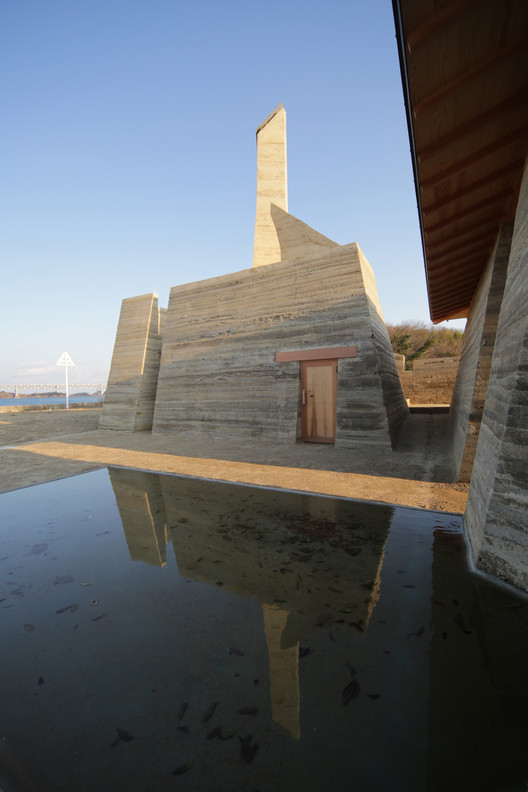 Text description provided by the architects. This work is part of the Setouchi Triennale 2013. In Shiwaku Islands including Honjima, there were a large number of carpenters (over 400 master carpenters) from the late Edo era to the Meiji era. Shiwaku carpenters were the people who were a shipwright made use of the high technique and came to make house and Domiya. It is seemed that they widened a range of work to the place where not only the Setouchi coast but also a goods-carrying merchant ship arrived at. However, the old man who retired himself from the carpenter and comes to only live in Honjima now. I began activity of the technical preservation of the Shiwaku carpenters about 20 years ago, because I would like to hand down their technique somehow. Recently, I hold a carpenter experience with children labeled as Shiaku carpenter school, and Shiwaku carpenters exhibition. It is a part of this activity that construction of 17 public baths in Tohoku area as supporting project "ZENKON-YU" of the Great East Japan Earthquake disaster. The scene of refuge where we went as ZENKON-YU project gave a shock to us. There were both carpenters and architects in refuge, but the disaster demoralized and deprived people’s construction activity. There were powers of live and desperate efforts for building in illegal houses of the post-war years of recovery. Time of 65 years might take them away from us. I decided to challenge to the Setouchi Triennale 2013 for regaining powers and desperate efforts in our hand.

There are almost none of general materials to make a building in Honjima. However, it might be improvement condition for this project to regain powers and desperate efforts to build. There are the sea and the earth in the island. With using them, we can build by rammed earth. Originally, the method of construction called “HANCHIKU” which is mixing bittern and slaked lime provided from the sea with the earth and ramming it to improve structural strength. Rammed earth is said to have been adopted at the Great Wall of China. It links with the history of Honjima that Setouchi becomes node of overseas and Japan when the technique of rammed earth was brought from China. Begining with the most primitive thing correspond to this project aiming at revival of the carpenter technique.

The form of this building that surrounded a whirlpool like a coil was formed by connecting walls made by aspect ratio. Making by hand was disregard detail and technique and digging for rational form. As a result, this building became the molding across nationality and the times while having Japanese atmosphere.

We rammed the local earth with human power earnestly. The project began with a small number of people first, but about 300 people participated in work as cooperation with our project. There was a carpenter in them, too. The project of revival of Shiwaku carpenters technique had been not easy to readily to get cooperation from craftsmen. However, the situation improved for the better while work advanced.

I feel like having been able to prove the passion of making architecture. And it is subtly seen in the future of Shiwaku carpenter school.

I express gratitude to the Setouchi Triennale 2013 which gave a chance for this project and people of Honjima, many other cooperators. 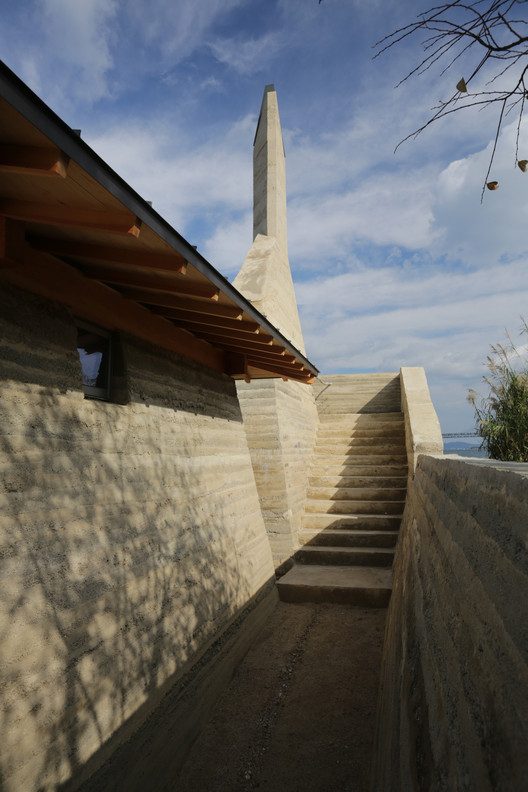