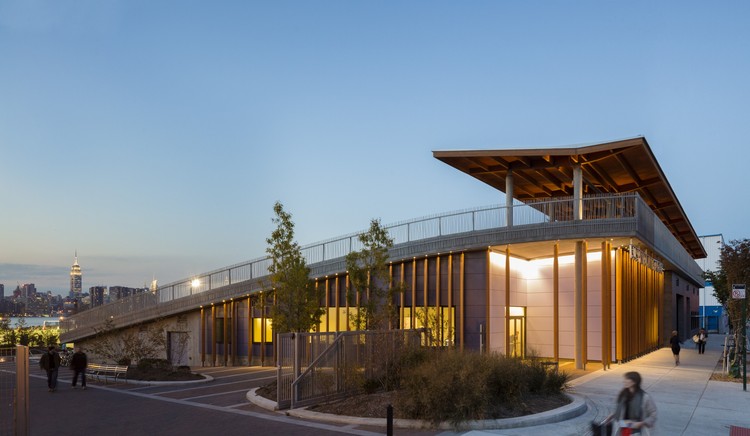 Text description provided by the architects. Bushwick Inlet Park transforms the Brooklyn waterfront from a brownfield industrial strip into a public park. Located in the Williamsburg section of Brooklyn, the design is the first step of an ambitious waterfront redevelopment along the East River. The design team has integrated a program of athletic fields, community facility and a NYC Park maintenance and operation facility into a 6.2-acre park.

The Park wraps over the building on the west side, turning the building into a green hill so that 100% of the site is accessible to the public. A zigzag path provides ADA access to the top, where a large wood-framed canopy provides shade and views over the play fields to the Manhattan skyline. Direct building access for the public and the Parks staff is provided from the street edge below.

Program: The 13,300-square-foot ground floor is divided into the northern section which houses the maintenance facilities for the Department of Parks and Recreation, and the southern section which is a community center run by the non-profit Open Space Alliance. Each program area has its own separate entrance.

Building Performance: The initial program requirements just called for a LEED Silver building in a park. The design team, however, felt strongly that public space in a sensitive waterfront site required intensive integration of use, program, and environment, and should target a much higher environmental performance standard. The project maximizes public space, with the park rising up over the building. Under the northwest-facing green roof, the building is conceived as earth-sheltered, with controlled southeast and southwest solar exposures. Despite the subterranean experience of the building (with abstracted recycled aluminum tree-root chandeliers projecting through the lobby ceiling), all occupied spaces, including the lobby, have abundant natural light.

The all-electric, primarily solar-powered mechanical systems use no roof space for chillers, flues, or vents, and generate no noise or emissions. Irrigation of the green roof--a critical requirement for such an intensively used surface--is provided by captured rainwater and graywater from the playground sprinklers.

Planning: The building is designed as a useful and beautiful public space, inside and out, responding to the differing conditions of the city and the park. On the park side, the building and landscape are one; on the street side, the public facades features a colonnade of vertical wood sunshades marking the entrance to the most significant new park in north Brooklyn.

The Greenpoint Williamsburg Waterfront Open Space Master Plan was developed in conjunction with many community groups, to address local concerns about the 2005 upzoning of the neighborhood and resultant increase in density along the waterfront. The park gives the community access to the waterfront, both physically and conceptually as it reinforces the neighborhood’s sense of place and relationship to Manhattan. It also provides park land and recreational opportunities in a neighborhood which had comparatively little open space. The athletic field is one of the most heavily used fields in the city, with soccer games running until 11:00 most nights.

North 9th Street was extended as a pedestrian path at the southern edge of Bushwick Inlet Park, reinforcing the existing street grid and continuing it to the water. The park was designed to continue the State Park’s pathways from the south and to link to the future phases of the Master Plan to the north.

The vast majority of visitors come by public transport or bicycle. Within a few blocks there is bus, subway, an East River Ferry dock, a bike path, a Citi Bike share dock, and many residents. The only parking provided is for park maintenance personnel, with six spaces under the green roof in the north yard, and two inside in the garage. 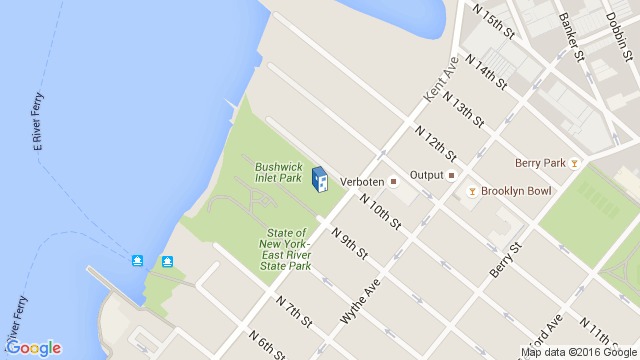