Save
Strelka Unsettled: A New Future for Moscow’s Most Neglected Architecture?
Share
Or
Copy

The Strelka Institute, Moscow’s most innovative school for architecture and urbanism, "might be soon forced to leave its current venue in the heart of the Russian capital" due to proposed redevelopment of the area. Faced by the threat of this possibility, the school formed a competition in order to collect ideas for the relocation. The winning proposal, developed by Squadra Komanda, proposes a "visionary program of development for the disputed and immense architectural legacy from the late-Soviet period."

Late Soviet architecture constitutes "almost two third of all buildings in Moscow." As it represents "an unpleasant reminder of the recent past," many Russians dislike this kind of building. As a result, the Strelka Unsettled, with the possibility for collaboration with the outdated cultural institutions hosted inside the building of the All Russian State Library for Foreign Literature (built in 1966), seeks to offer new scenarios for this "neglected kind of architecture."

According to the institute, "in its four years of existence, Strelka has become an exemplary cultural venue in Moscow." They successfully introduced critical topics like ‘public space’ and ‘the periphery’ to the urban agenda of Moscow by operating from a "rather isolated and apolitical post-industrial location" in the city. However, to remain a pioneering agenda-setter in the urban realm of the Russian capital, Strelka must unsettle. "It should move forward and take on rougher challenges that are typical to the Russian condition. Only then Strelka will be able to realize its goal: to change the urban landscape of Russia."

"The vast majority of buildings in Moscow and other Russian cities are built after WWII and before the collapse of the Soviet Union in 1991. For many people, these buildings represent an unpleasant reminder of the recent past. The buildings are regarded as outdated, uninviting and of poor quality. These negative associations are reinforced by the fact that many of these buildings host inefficient public organizations, are empty, or are simply neglected by developers. Now, more than 20 years after the end of the USSR, time has come to develop new ideas for these buildings."

"Compared to their international counterparts, many cultural institutions in Moscow and Russia are outdated. As they prioritize preservation over presentation, most of these institutes are not aimed at providing visitors a high-quality cultural experience. They often have uninviting entrances, under- or unused spaces and many of these institutes operate in isolation of each other." 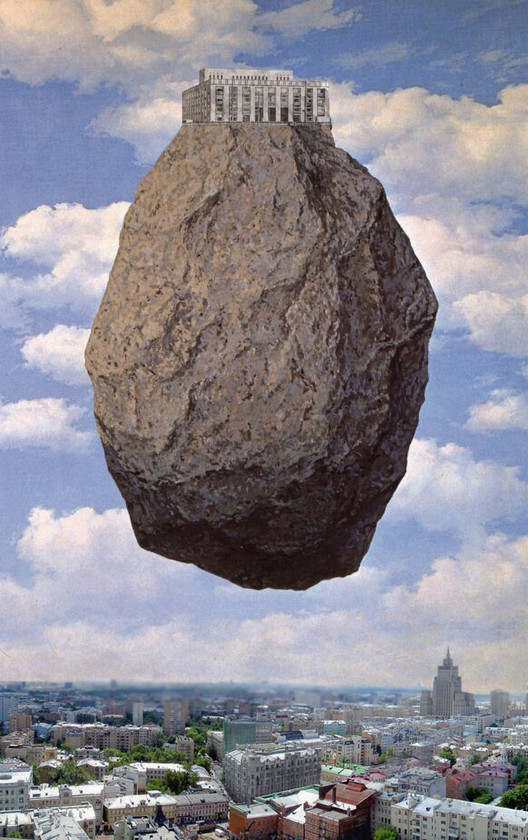 Squadra Komanda "urges" Strelka to take on these challenges by moving into the All Russian State Library for Foreign Literature (ВГБИЛ), a building located on the banks of the Yauza river within two kilometers east of the Red Square. "This imposing 20,000 square metre construction from the late 1960s is an emblem of post-war Soviet architecture. Although the building is in quite good repair, it houses a series of outdated and disconnected cultural organisations."

According to Squadra Komanda, "Strelka enhances the accessibility and public character of ВГБИЛ by creating new entrances and corridors, allowing access to the building’s courtyard directly from the Yauza river bank. A triangular green space in front of the building is developed as a public space for events and meetings. From the courtyard, a publicly accessible Trajectory starts, which moves diagonally through the whole building and creates an in-between space that con- nects all the functions in the building." Moving into the ВГБИЛ will double the institute in size and allow it to "cooperate with the current tenants by sharing educational facilities and co-producing parts of the public program."

"The academic and the fashionable, the commercial and the non-commercial, 20th century and 21st century Moscow; all will be consolidated in the ВГБИЛ building, generating an urban prototype that aims to inspire and provoke the cultural, design, and business fields. At the same time, relocating Strelka in ВГБИЛ is not considered as a development with a definitive end. When Strelka’s new prototype proves to be successful and is adopted by others, the institute will take on new challenges and move to new environments. In this way, Strelka continues to unsettle."

The competition jury comprised of:

The jury brief included a technical evaluation of all projects, performed by the following experts:

Squadra Komanda is comprised of: