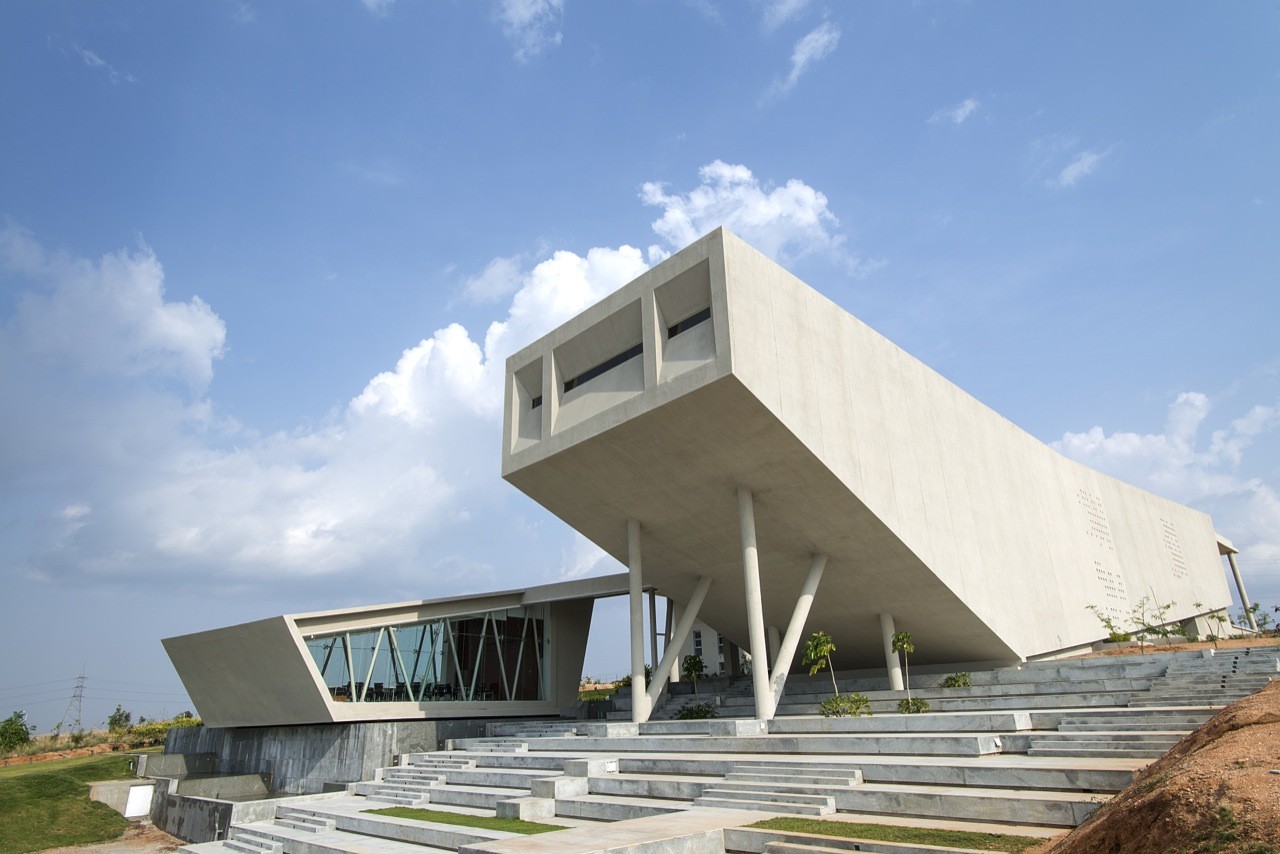 Text description provided by the architects. The site is around twelve acres and is located on the outskirts of Mysore alongside area marked out for industrial development. It slopes down from south towards the north and is bound by roads along a part of eastern edge and completely along the western edge. Architecturally the Clients were keen on creating strong identity for the institution as they felt that it should reflect their own creative approach to curriculum and teaching.

The design for the management institute explores the potential of the rolling terrain on the outskirts of Mysore to create spaces which facilitates a participative environment which enriches the learning and living experience. The idea for the institution is inspired by the landscape, a terrain marked by boulders is a common landscape feature along the Mysore Bangalore highway. This landscape is also evocative from a sculptural perspective, here the weather beaten stones tell the story of time, there is also a primordial quality about boulders and its relation to the "idea of a shelter ". We looked to capture the energy of this landscape and translate into notion of institution where landscape and architecture are fused to create provocative identity for students and teachers alike promoting architecturally the need for pursuit of excellence. This we believe lends to the creation of fond memories centred around the idea of place, teaching and growing experiences, which are essential to the notion of an institution.

The program was blocked  and was located along the southern edge  along  the highest contours. The design idea was to establish a datum with reference to the sloping terrain allowing us to use the terrain in a structured way. The program was divided into two bars, anticipating the surrounding development the idea was to look internally rather than outward resulting in open space between the two. This helped in the organizing  the program  into administrative and the student zones. The administrative functions are located in the eastern bar and the classrooms were located in the western bar. The two bars were modulated to create spaces in the south western and the north-eastern zones. The  resulting open space between was further divided by folding the eastern bar  inwards creating two distinct open spaces further giving identity to the student and administrative realms. The staff rooms and the library are housed in the folded space. A student's lounge is planned in between them overlooking the student courtyard, giving the library a distinct presence. A part of the student's bar is subtracted and rotated to create a more distinct student court. The rotated part was also seen as the executive classroom. Levels are modulated along the east and the western arms to exploit the slope of the land. Smaller courts are introduced to lend light and ventilation to classrooms.

The spaces are structured by the fact that teaching is essentially within the classroom, but on to this is juxtaposed a spatial structure which encourages the informal, allowing to release and in the process enhancing learning process itself. Movement system through this layered structure is continuous and also varied owing to the lying of the land, the resultant design is a system of interconnected spaces with verandahs, open corridors, terraces and courts at various levels establishing a links with the outdoors. These spatial elements are modulated further to serve as buffers from the sun and allow for effective ventilation. These corridors meld seamlessly into the courtyards or open air theatre dissolving boundaries between inside and outside giving the feeling of walking through landscape to reach different programmatic components Landscape elements like water bodies, seating spaces and open air theatres are carefully integrated into this experience adding to tactility while  lending a human scale to the spaces. Though dealing with various levels the design incorporates wheelchair access to the various spaces through system of ramps and a strategically located lift.

The need for raked classrooms fuelled formal investigations. In the process two classrooms were combined to produce the possibility of single raked seminar space or also could be used as two classrooms when required . The resulting angular geometry in the section led to thinking of forms jutting out of the landscape. Much like the boulders along the Bangalore Mysore highway. The angular geometry also helped us establish an attitude towards the ground, but also to the sky. The library uses this to tap north light effectively into the space. The east and west are seen as solid surfaces reducing the heat penetration. Framed construction with solid concrete block in fill is rendered with plaster and paint to bring about the monolithic feel. Local rough finished granite is used as the flooring material, which is carried throughout and is complimented by polished stone or wood in case of certain programs.

The interiors contrasts the solidity  of the  exteriors bringing in a sense  of lightness,  flexibility and freedom. The hard edged  and protective external  boulder like surfaces  give way to light and flexible spaces which provides for  the nourishing needed for intellectual development and engagement. The design and spatial structuring also supports the accretive nature of an institution allowing for growth easily.  The attempt here is to create an environment that one can emotionally identify with while opening one's mind to the creative potential around us. 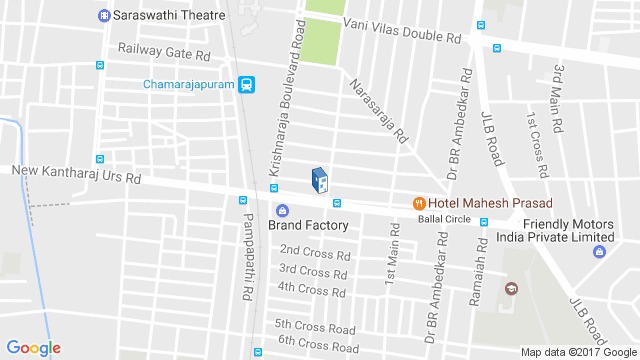 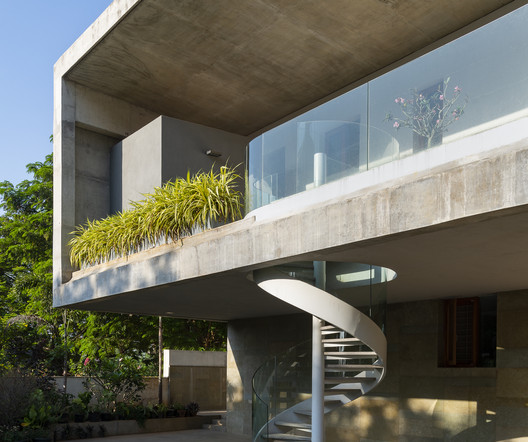