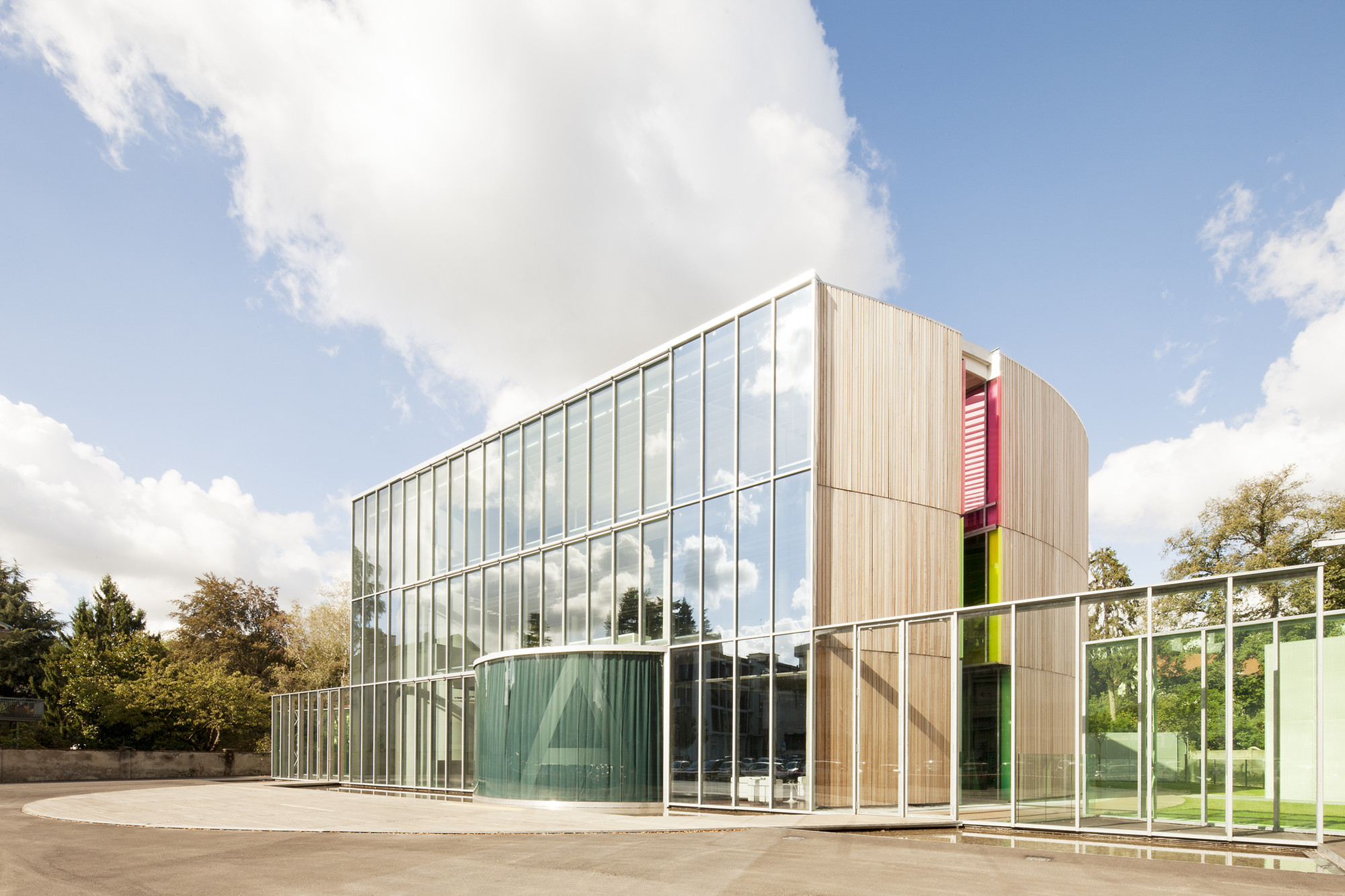 Text description provided by the architects. Built in the 2012 after Giuseppe Marinoni’s design had won an international competition, the Learning Centre FLA (Lombardy Foundation for the Environment) at Seveso looks on the outside like a primary volume, divided up by vertical fissures and sectioned by the glass front: a wing of the square and proscenium opening onto the town. The rigorous elliptical layout of the plan is in fact a collage of irregular forms suited to a variety of uses: conference rooms, exhibition spaces, offices, a media library. The architectural conception exploits natural light as a means of creating mutable environmental qualities. The artificial lighting, on the other hand, draws attention to the spaces generated inside, visible outside at night as two-dimensional figures projected onto the glass screen of the façade.

In 2005 the foundation held an international competition for the design of an FLA Learning Centre at Seveso. The site chosen was an interspace used for parking between the Town Hall and the railway station.

The terms of the competition called for a building of 2000 square metres on three levels. The uses were: spaces for conferences, displays and exhibitions on the ground floor; the branch offices of local authorities and the foundation on the first floor; a library and a media library on the second floor. In 2006, out of forty participants coming from a number of European countries, the jury named Giuseppe Marinoni the winner.

His project was chosen for the way it delineated the traits of the identity of the new institution using the means of contemporary architecture – placing itself as an urban icon among Seveso’s other modern monuments like the Villa Bianca and the Town Hall – and for its ability to configure a place of great architectural and urban quality, radiating beneficial effects on the surrounding town. The proposal also envisaged upgrading Piazza XXV Aprile to turn it into a unified and landscaped parterre, suited to contemporary modes of use and able to connect the new institution to the town.

On the outside the building presents the appearance of a primary elliptical volume, divided up by vertical fissures and sectioned by the sharp line of the glass front: a wing of the square and proscenium opening onto the town. The interior on the other hand is an assembly of irregular spaces reorganised into an elliptical shape. This principle of collage makes it possible to compose diverse spaces into a recognizable icon, making the complexity of the interior interact with the simplicity of the exterior.

Glazed fissures, resulting from the principle of aggregation, break up the monolithic volume, signalling the accesses from a distance and making it possible to see into the complex from the surroundings. The articulated form expresses a twofold value: a landscape one, towards the garden on the Seveso River, where the curved volume faced with wooden planks presents the appearance of a pavilion; an urban one, facing the square, where the large glass wall punctuated by metal uprights delineates the front of a virtual building.

The mediation between institution and town is done by means of the pool of water that duplicates the front. A virtual ‘threshold’, this gives form and figure to the rituals of access.

The vertical and horizontal accumulation of different forms generates internal interspaces, revealed by the clefts that run through the unified elliptical shell from ground to sky. The stratification is laid bare by irregular staggering of the floors and accentuated by the different colours of glass that distinguish the storeys.

The fissures allow light to filter through in different ways over the course of the day, letting the levels interact functionally and visually and relating the uses to the different storeys. On the ground floor, the Forum. A place open to the public and a flexible space in which to hold conferences, training activities, exhibitions and cultural and recreational events.

On the first floor, the Working Club. Work, team meetings, study and research interact here in spatial and visual contact. On the second floor the Media Library and the Exhibition Space. The terrace-patio helps to generate an introverted and meditative setting, suited to concentration and absorption.

Staircase and services take the form of primary cylinders, built of expanded plate and clad with wooden planks, that pass through the different storeys from the basement that houses the lounge.

The bioclimatic conception of the building: a hybrid of ‘passive systems’ and ‘active systems’.

The passive systems are the product of a typological and architectural choice: the orientation of the glass walls to make the most of input from the sun, the compact form to minimise the surfaces through which heat can be lost, heat resistance obtained through massive walls and thick layers of insulation, control of exposure to the sun with selective glass, coloured films and sunscreen curtains.

Elements of symbolic and spatial unification, the vertical fissures are also systems of direct gain: means of capturing the heat of the sun and flues of natural ventilation. They allow light and sunshine to enter in different ways at different times of day and seasons of the year and help to obtain optimal conditions of environmental, thermal and visual comfort.

The active systems adopted, in synergy with the passive systems, make use of geothermal energy in order to keep consumption to a minimum. Heat pumps exploit the temperature of the groundwater for heating in the winter and cooling in the summer, fuelling a system of zoned climate control integrated with heated floors.

Criteria of flexibility have oriented the conception of the architecture towards a free plan and the use of lightweight and dry-mounted elements of subdivision. In the offices, for a greater adaptability, a principle of subdivision of the workspaces with elements of furnishing and movable walls has been adopted.

But the ground floor in particular shows a high level of performance in use. With the versatility of a theatrical stage, mobile walls, panes of glass and curtains can be manoeuvred to make genuine scene changes, allowing adaptation to the multiple uses required.

With curtains open and mobile walls pulled back the whole space is freed up and made available for festivities, dinners and temporary exhibitions. Closing the black curtains in an ellipse delimits the plenary chamber, with a capacity of between 90 and 250, with the foyer around it. The mobile walls and white curtains can be positioned in various ways to define other configurations: from one to three rooms with seats for 50 people, each with exhibition and reception spaces at the sides.

The distinctive atmospheric qualities expressed by the textures of the construction materials and the light dry-mounted materials – concrete, expanded plate, micropore fabrics, coloured glass – are enhanced by the strategic use of artificial lighting. The lighting design contributes to the creation of micro-settings suited to the requirements of the different places and the multiple uses of the building. In this case, just as on a stage, the lights play an active part in the construction of different scenes.

The conception of the lighting design is oriented towards enhancing particular sensorial properties, in close relationship with the architectural conception, which uses natural light as a means of creating mutable environmental qualities over the course of the day. Reacting with the architectural, spatial and material elements, the light takes on numerous autonomous, specific and shifting forms, capable of mixing up continually with reflections and chromatic refractions like in a kaleidoscope.

At night, the spatial values generated inside are projected in two-dimensional figures on the outside, on the glass screen of the façade. 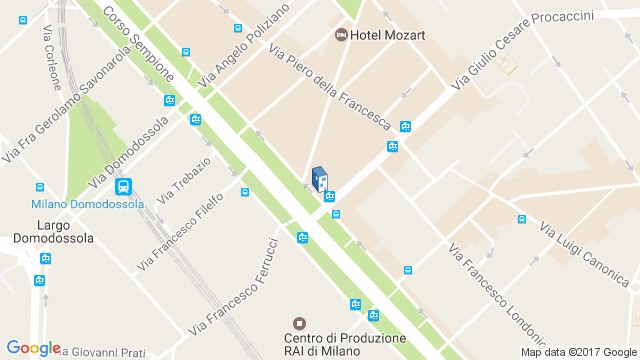