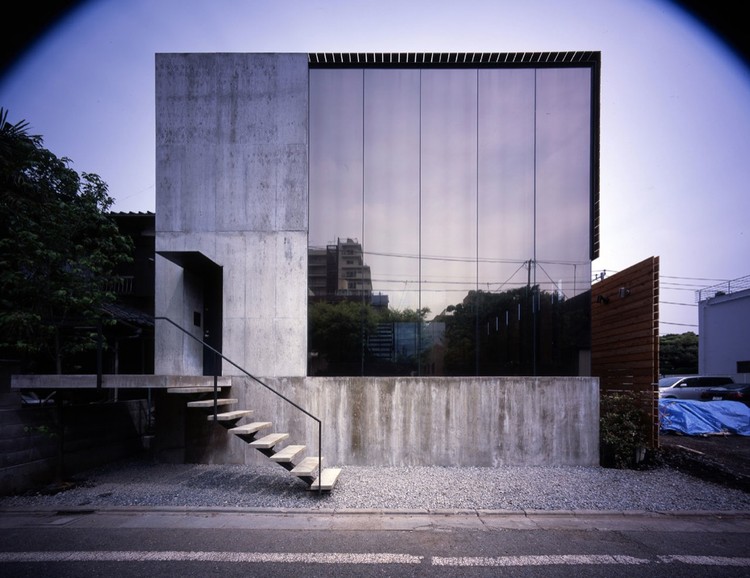 Text description provided by the architects. This is a house to be built in Tokyo, for a movie producer couple.
This architecture is consisted by combining L-shaped blocks of reinforced concrete and sequential frames of box-shaped engineer-wood. We put bedrooms, film archive and galley in solid concrete part for security, and living room in engineer-wood part for openness. As material that consist an open space that is 6m in height, 5.5m in width, 14m in depth, we choose thin engineer-wood (38mmx287mm).

Main theme for this architecture is to bring out a sense of mass and material, which were denied by modern architecture which pursued "white, flat wall" as a style. We intentionally left the wood grain of mold on the surface of concrete, and choose textured stones and irons.

It goes without saying that a house is a relaxing place. A house like a white-cube, surrounded by flat, white walls everywhere, gives a person very abstract image. But that image could only be sensed when we use intellective part of our brain. The problem is that we're not all-intellective-creature. For the people like this client, who do enough intellectual labor on a daily basis, white-cube would only bring sense of fatigue. The role of architecture, especially the ones for living, is to soothe the sensory side of people, not to stimulate the intellectual side. That's my take.
Sure, intellectual living would have got some meaning as a fashion at the time when modern architecture was born. However, now that it became a part of everyday life, its identity has been lost. We have to examine whether our approach is rational or not every time we build architecture.

Architecture as Dialogue
We do not subscribe to the assertion that "the city is a problem and architecture is the answer". That point of view is a pure product of modern architectural theory, which as such weighs very heavily on today's architectural education programmes: What are the problems running through the city? What answers can architecture offer them? School trains us in the acquisition of this method of questioning. Student evaluation is based on this conceptual and rational system of question and answer. And it is doubtlessly relevant, if limited to academic training; architecture on paper, devoid of substance, remains at a level of abstract purity that allows it to theoretically resolve the problem posed by the city.

But with real architecture it is quite anther matter. Indeed, even when it is designed as a pure answer, architecture realized, from the moment it imposes "mass" and becomes a built object, never manages to get beyond the "city=problem" equation. Because many architects have not grasped the obviousness of this, an incalculable number of buildings have sprouted in the urban landscape through the conscious application of the lesson learned: "problem-solution." Unfortunately, the legitimate and equitable "answer" expected often winds up being nothing more than deplorable "urban filler". For in using this approach, the concrete situation of the city is rendered abstract, theorised and formalised as problem and turned into a set of logical systems which will in turn administer a logical architectural answer. It is useless and unsightly to reintroduce these relationships defined through the filter of conceptual labels into the material world in the form of buildings. the resulting built architecture is merely a superfluous residue.

We are doubtless the first generation to become aware of the reality of modernism's limits. We sincerely and conscientiously avoid dealing with architecture through concepts as much as possible. For us, the city is from the outset imbued with "substance," and the architectural process is the creation of "substance". Therefore, we seek to manipulate these concrete relationships, as they are, in all their concreteness. The relationship between pre-existing city and future architecture is never envisaged in a unilateral way, as one would do when bringing an answer to a question, but rather as a continuous and balanced "dialogue" between the old and the new "substance." This is what makes our point of view so childlike. To act upon things simply, so they will actually become what one would wish for.