Text description provided by the architects. If you made it to South By Southwest (SXSW) in Austin this year there is a good chance you were drawn to this 11-foot, steel vaulting structure known as Caret 6. Designed by OTA+ principle Kory Bieg and his 2013 design-build studio from the University of Texas’ (UT) Austin School of Architecture, the CNC-fabricated structure was originally conceived to exhibit the prototypes and winning project from the TEX-FAB's 2013 SKIN Competition before being reassembled as part of the Next Stage and Renegade Craft Fair at the annual interactive, music, and film festival.

Grounded by a central catenary vault, the diamond-celled structure supports two cantilevering arms and a third cascading vault that forms a base for showcasing exhibition content. More information from the design team, after the break...

From the Design Team: The project began with a competition between students in Bieg’s design-build studio. The brief was to design a structure using aggregation, weaving and stacking techniques to create an assembly that could transition from graphic to flat surface to volumetric enclosure. The students were also asked to consider the objectives of the SKIN Competition by incorporating metal as the primary material and digital fabrication as the construction method. Ultimately, a combination of projects were selected, combined and refined into the final project, Caret 6.

To enable a smooth transition from a flat, two-dimensional ground surface into a volumetric, three-dimensional vault, the studio used a diamond pattern that could work as both an aggregate and woven rib-system. Though the diamond pattern appears to be series of stacked cells, the structure is actually three layers of overlapping ribs. Large, continuous primary ribs form the seams from vault to vault, while secondary ribs span between each seam. Tertiary ribs complete the web and enclose each cell to create a rigid structure.

A core goal of the studio was to introduce asymmetry into what would otherwise be a symmetrical form. The vault is roughly 11’-0” at its highest point, enclosing a space small enough for occupants to engage directly with the surface, a condition atypical for most vaults which often frame larger and much taller spaces. Caret 6 was designed to fill an already existing space, so it was necessary to design a geometry that responded to the existing room, especially at the edges, where the vaulting forms project toward the walls.

The asymmetry of the overall form feeds back into each surface via the distribution of secondary and tertiary ribs within each vault, influencing the asymmetrical diamond pattern on the surface. As opposed to some parametric projects that promote the application of smooth gradating patterns, the diamond pattern of Caret 6 is highly differentiated from cell to cell, pitting small clusters of diamond shapes adjacent to much larger diamonds.

A symmetrical vault would have been relatively easy to design and analyze using current digital design software, but as soon as asymmetrical forces were introduced to the vault, which would otherwise be in perfect equilibrium, a more complex analysis and set of calculations were required to ensure the structure could stand. To add to the structural challenge, the installation had to be entirely free-standing, with no attachments to the floor or surrounding room. Our studio worked with faculty and students from the University of Texas Engineering Department to determine the depth and thickness of each piece and to design the connection detail at each column base.

The studio was fortunate to receive a donation of Alpolic, an aluminum composite material typically used to clad large office buildings. Using Robot Structural Analysis, we were able to model and test different Alpolic assemblies to determine a structurally sound solution that still achieved the aesthetic and formal aspirations of the design. Ultimately, we added a layer of attachment details that included thousands of O-rings and binder rings to ensure stability in the event a lateral force or unexpected point load is applied (ie. someone hanging on the edge of the cantilever), but in its resting state, Caret 6 does not require any fasteners.

Caret 6 was designed to be easily assembled, flat-packed and then reassembled at a new location. Initially, the project was installed at the Mebane Gallery in the School of Architecture at UT Austin as part of the SKIN: Digital Assemblies Exhibition during TEX-FAB 5. It was later reinstalled at the Next Stage and Renegade Craft Fair as part of SXSW, one of the largest film, interactive, and music festivals in the world. It will also be exhibited in the atrium of the Gerald D. Hines College of Architecture at the University of Houston. 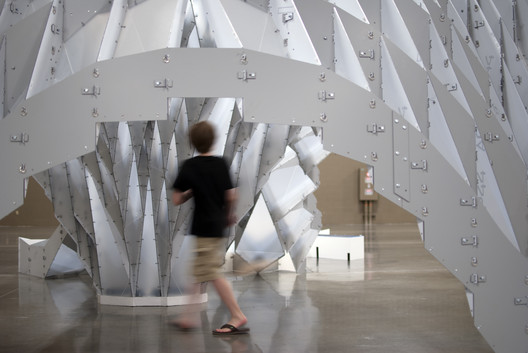