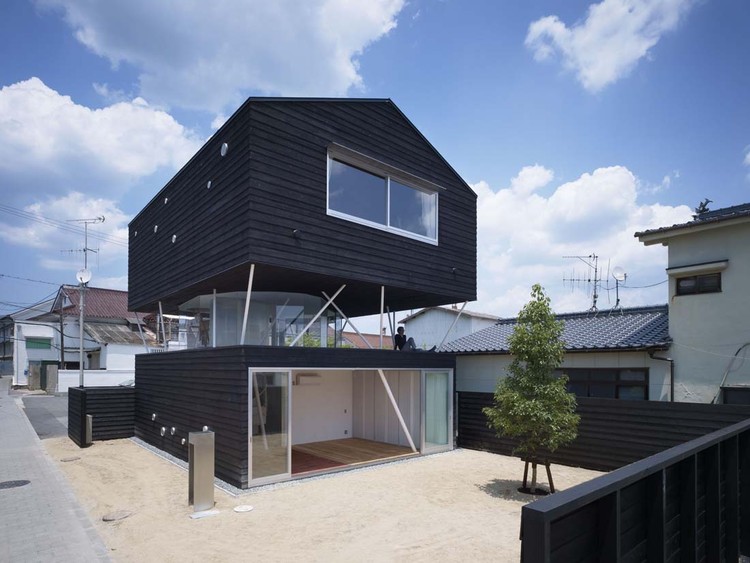 The site is located in a district where many traditional sake breweries preserve good old Japanese street with plaster and charred cedar walls. In winter, during sake brewing season, a cloud of steam comes out from red brick chimneys of the breweries and the scent of sake wafts in the air. “Charred Cedar House” stands in such neighborhood.

Fence made of charred cedar shields three sides of the plot to save the privacy; east side from an adjacent house, north and south side from public parking where cars come and go around the clock. West side of the house borders directly nostalgic street of traditional houses and brewery warehouses of white stucco. The house remains open to the street to blend in the scene although trees may be planted in the future.

The house consists of three layers of different nature of space. Seen from the street, the first layer is a black box, the second layer void with spindly oblique steel pillars randomly piercing the space and the third layer gable black box floating on top.

In the first layer, there is no conventional Japanese entrance to take off shoes but an entrance hall with sand cushion brick-paved floor which leads directly to all the other rooms; main bedroom, tatami room, bathroom and spiral stairs to upper layers. Entrance hall, tatami room and main bedroom are partitioned by sliding doors and when fully opened, the first layer becomes quasi-outside. Sand cushion bricks were paved in the entrance hall to make a semi-outside/ semi-inside space in terms of material and nature of space which leads gradually to more private space.

From the entrance hall, stairwell partly covered by translucent FRP passes through the second layer, void, and leads directly to the third layer. Stairwell is covered by FRP in the second layer and only light can be taken into the stairwell. It serves as “light well” during the daytime and diffuses light to first and third layer.

Up in the third layer are living, dining and kitchen. On the floor are two openings; one from the stairwell from the first layer and the other to the second layer, sole access to the open space by ladders. Third layer is wooden structure, and wood beams and roofboards are all exposed. It is a nest-like enclosed space with picture window on the north and south and tiny round windows.

Down the ladders from the third layer leads one to 360 degree-view of glass walls on the second layer which is assimilated to the open air. There are many one-story houses in the vicinity and view from the second layer stretches over far-off brewery warehouses, town houses and brick chimneys. The second layer, open and transparent, is visibly most accessible from the outside but physically least accessible and deep-set.

Each layer of the house has different degrees of visible, physical and social accessibility from the outside which simply cannot be measured by the composition of the three layers. The complexity of the relations within the house offers various options for relations to the society.

Steel-frame structure was employed for first and second layers as application of slim materials is available by concentrating the stress. Third layer, on the other hand, employed wooden framework construction method which was developed from traditional Japanese method. Structure of the first and second layers is distinctive with employment of φ100㎜・φ140㎜ steel pipes for first layer andφ60㎜ steel pipes for second layer, all of which are oblique in different angles. In Japan, a seismic country, diameters of pillars tend to be large to resist the force of earthquake and installation of bearing walls with braces tends to be frequent practice. The framework is calculated on the assumption of resistance to enormous force of earthquake which does not exist in everyday life. However, pillars of extremely small diameter can resist vertical and horizontal load simultaneously when correctly tilted and positioned. When this formula is found, the space free from enormous force or conventional structure method floats in the air as natural as up above brunches of trees.