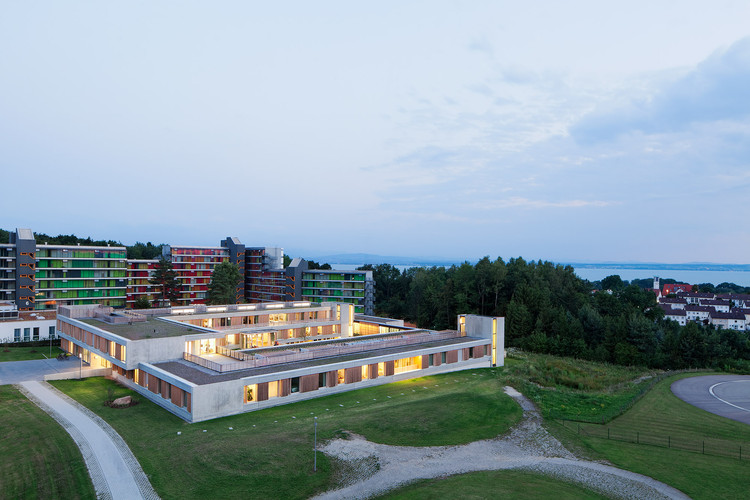 The new psychiatric centre lies embedded into the campus of Friedrichshafen Hospital and follows the picturesque, orchard-laden, natural slope of the hill towards Lake Constance. The building encloses a generously dimensioned green courtyard and exploits typologically the contour of the hillside by providing entrances on two different levels. A wide spanning bridge frames the generous view into the undulating landscape and helps to emphasise the natural slope even within the sheltered courtyard. The psychiatric centre can be easily perceived from the landscape while enabling picturesque views of the countryside from within. Large central therapy rooms with direct access to the patients´ garden are arranged on the lower floor by exploiting the possibilities of natural illumination along the slope.

The main building of the hospital, constructed in the 1960s, dominates the extensive grounds of the campus. The adjacent singular buildings of both the Kindergarten and the residential developments relate orthogonally to the hospital. The proposed expansion of the campus through the Mother-Child Centre, the Medical Centre and the Radiotherapy Centre emphasise in their orientation the pedestrian-friendly character of the campus. The new Psychiatric Centre arranges itself as a significant figure in this system. The entrance area between the new build and the existing hospital provides a high level of amenity and invites patients, visitors and employees of the hospital to linger.

The two materials, fair-faced concrete and untreated wood, dominate the surfaces of the building both internally and externally. Concrete is treated in a sophisticated way: large flat board-marked concrete surfaces and fine horizontal linear prefabricated elements, corresponding with the vertical fins of the wooden cladding. The timber cladding is made of untreated silver fir as a reference to the local building tradition, particularly in the nearby Vorarlberg region of Austria. The vertical cladding, comprised of untreated wooden profiles, lends the building, through its transparency, an airy and open appearance. 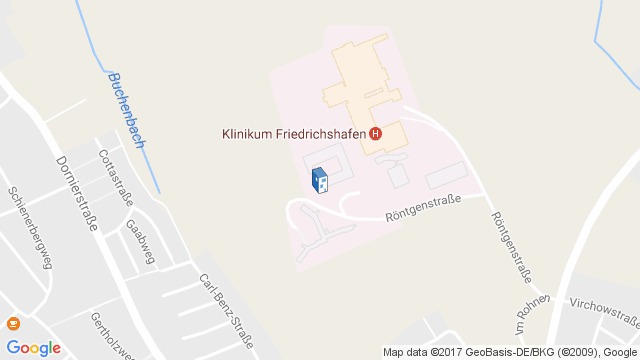