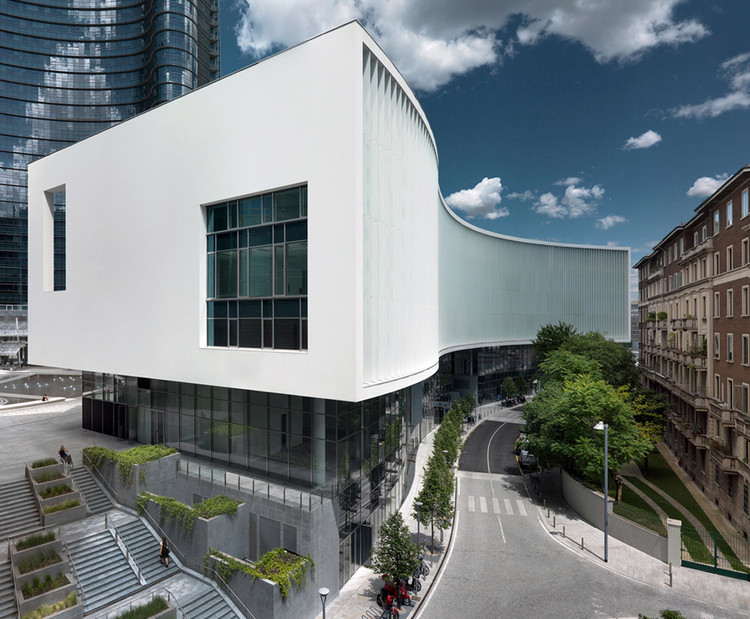 As part of the Porta Nuova urban renewal project, the so called “White Wave” is a building for showrooms and offices, which has become the symbol of the new architectural dynamism of Milan. Designed by Piuarch as project winner of a Competition held in 2006 by Hines Italia.

Bounded on one side by the central square, adjacent to Cesar Pelli’s three towers, the White Wave has an area of about 22.500 square metres distributed over five stories and a ground floor for an overall height of 30 metres.

This choice was conditioned by the need to respect the heights of the existing residential buildings as well as by the desire to make the new structure a strong and recognizable landmark within the requalified area, in contrast with the general plan which calls for much taller buildings.

The simple and sinuous form of the building articulates and integrates the two volumes in a single element distinguished by a deep central fissure. A projecting roof on the southern side runs the entire perimeter of the building, resolving at the base of the first floor to form a sort of container open on the long sides.

The design plays with the contrast of the building’s two main facades.

The northern facade, on the plaza, is a large, light, transparent glass front that functions as a rigorous backdrop for the pedestrian area and the new Gardens of Porta Nuova.

The southern facade, at the edge of the area bordered by Via Don Luigi Sturzo, with a curved profile, is enclosed by a sunscreen system; the blades mounted on the facade vertically pace the front, regulating internal luminosity. The continuity of the elevation, of about 140 meters, is enlivened by a system of internal courts with colored windows, that penetrate different levels of the building, bringing light to the various levels.

The portico and roof are combined in a unified way: the portico rests on the glass facade of the shops, and its overhang permits a covered walkway along the entire building. The overhang of the roof closes the glass volume and clearly defines the silhouette of the building, making it simultaneously linear, clean and unique.

The White Wave rises at the centre of the Porta Nuova urban renewal project - that includes the Garibaldi, Varesine and Isola areas in Milan. An ambitious undertaking aimed at revitalizing over 290,000 square meters of abandoned areas, reconnecting the urban fabric of three neighborhoods that have been separated for over thirty years.

The goal of its requalification is to give this vital area back to the city and make it an integral part of the future urban dynamic.

Within this multifaceted and complex plan, the White Wave seeks to establish a dialogue with the public part of the area as a whole, configuring itself as an access point to the park, which is situated at a higher elevation with respect to street level, thus the decision to position the building on a sort of podium that connects the two spaces.

The Committee, presided by Cino Zucchi, has explained that “Piuarch works in Italy and abroad on different themes and scales - from interiors to urban design - shows a very good example of how great architectural and urban qualities can be pursued by dealing with the forces that are driving today the transformation of the environment”.

The motivation of the jury states that “the firm's collective organizationprovides a capability for dealing with different cultures, expectations and financial or technical resources. Their buildings (such as the Congress Center in Riva del Garda, Bentini Headquarters in Faenza, Quattro Corti in St. Petersburg, the Subsidized Residences in Sesto San Giovanni in Milan and Porta Nuova Building in Milan) show that, within the continuously changing professional conditions, it its possible to pursue new forms of urbanity and new spaces to live and work” 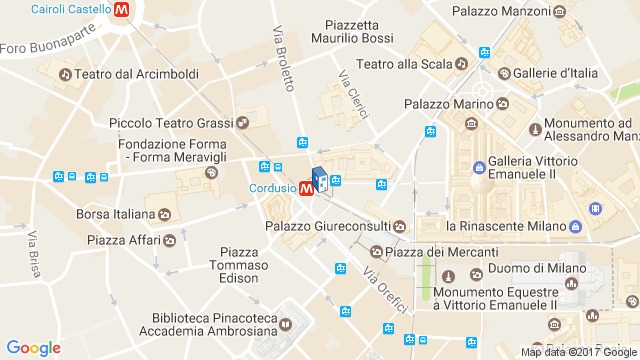