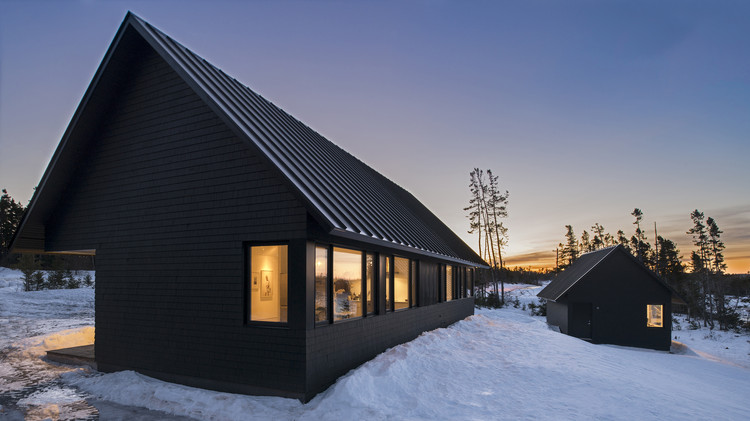 Text description provided by the architects. Black Gables are simply put, two modest sized gabled buildings, jet black, with a metal roof. The two buildings, one for primary living and the other for a studio and darkroom are located at skewed angles to one another so as to take advantage of the best views, exposure to appropriate daylighting and an overall playful composition.

The project was designed for a small town physician, acclaimed artist and collector Jonah Samson.

The house was built between May and December 2013 in a small town called Louisdale on Cape Breton Island, Nova Scotia. Jonah Samson had been living in Vancouver, Canada for about 10 years and decided that he wanted to move back to the east coast, and build a home and studio on a piece of forested, ocean-front property that had been in his family for generations. It was only after we cut down some of the trees, that we realized how spectacular the view from the house was going to be.

The goal was to be economical with both the budget, and with the amount of space the buildings occupied in the forest.  The house is 1200 sq ft, with one bedroom, and a separate room that the client uses as a library/office.  A wide hallway runs down the entire length of the house, so that he could have a long wall to display art.  The detached studio is about 450 sq ft, which is primarily an open space, but also houses a small dark room.  The total budget for both buildings was about $300,000.

The house was built using all local materials and labor.  It was built on a concrete slab, with a wood frame.  The exterior of the house is a composition of textures (all black), including a metal jacket roof, cedar shingles and metal cladding between the windows.  We decided to spend money on the roof, shingles and windows, and save money by using a pre-fabricated structure.  Using all local builders and contractors also allowed us to save a lot on the total budget.