Save
House in Colina / OPA 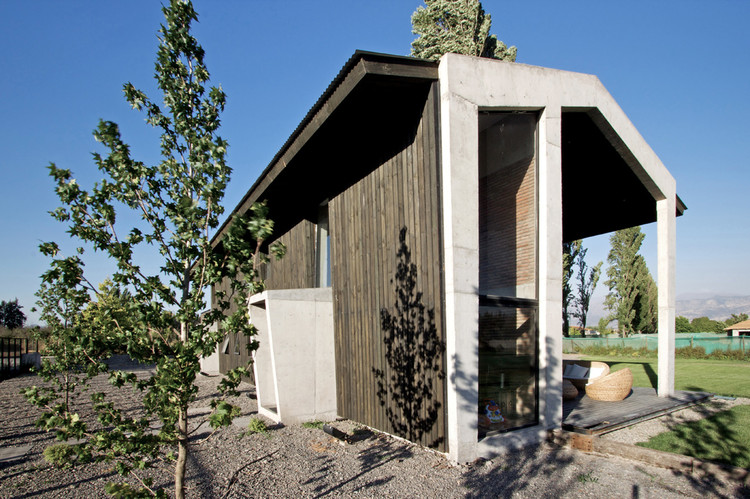 Text description provided by the architects. This house is located just outside Santiago, in the rural area of the Colina Valley. The abundant vegetation and open space, dominated by hills and groves, keeps the countryside feel of the environment, worn by urban expansion and insensitive real estate development, which reproduce city-type housing and infrastructure in a natural scenery. Thus, importing the city´s image over it.

This provided us with the first notions for architecture. The idea of reinterpretation and representation of traditional countryside constructions, over the idea of coming up with a formal concept for a house, to work within context and in relation to the natural surroundings.

While studying rural construction typologies, both housing and industrial, the space virtues of farm machinery and storage sheds and warehouses stood out, mainly due to its structural simplicity, interior amplitude and height, use flexibility, modular construction and its potential for programmed extension, all of which being strongly rated by the client.

The elements that build these structures are easy to recognize, making them common and familiar, while individual and defined within the landscape through the use of materials. This infrastructure settles respectfully in countryside geography, through its association to large culture and free surfaces, and poplar groves of interior roads that are seen from a distance as high and long green axes. Size, robustness and clarity of its shape manifest its architectural condition among the valley.

Opposite to this, the thermal and energetic problematic of heating and cooling interiors with large volumes of air, thinking in domestic use and its potential for rural housing and infrastructure, -this time inspired by its own characteristics and landscape-, extending countryside constructive tradition from a sustainable and contemporary environmental perspective.

As a design strategy we resolved to load the house´s structure with more variables concerning function and program, given the larger efforts it demands in the construction process, becoming the project´s theme and guideline. This results in a two story framework of individually shaped reinforced concrete frames, according to function and position in the house. No frame matches the next one, breaking symmetry and monotony of industrial reference models.

Interior space is organized by collecting all service and circulation functions in a two story technical corridor, separated from social areas and bedrooms by a double height brick masonry wall, which runs across the house. Both areas are connected through openings in the wall. The second floor circulation overlooks the living room and terrace, stressing its verticality and role as a central, family gathering space. Three terraces were placed in both ends of the house, facing south for summer time and north for the winter sun.

The columns of each frame have a variable section that increases with height, to create the condition for an insulating exterior wall that provides the second floor and roof with a larger thermal capacity, combining a wide air chamber and a thick layer of mineral wool. This contributes to store the warm air mass for a longer time, using less energy to heat the house, like an old farm house with thick walls of adobe. To cool the house, cross ventilation was designed in both directions and trough both heights, to favor fresh air circulation and passive extraction of hot air.

Landscaping was treated using the site´s surface to build dry areas and gardens around the house, and in function of the natural patios that are formed below and both sides of an old poplar grove that ends inside the site. 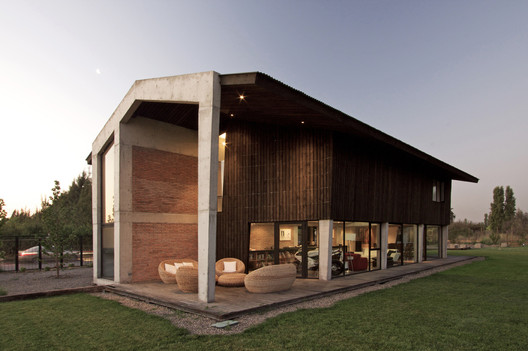