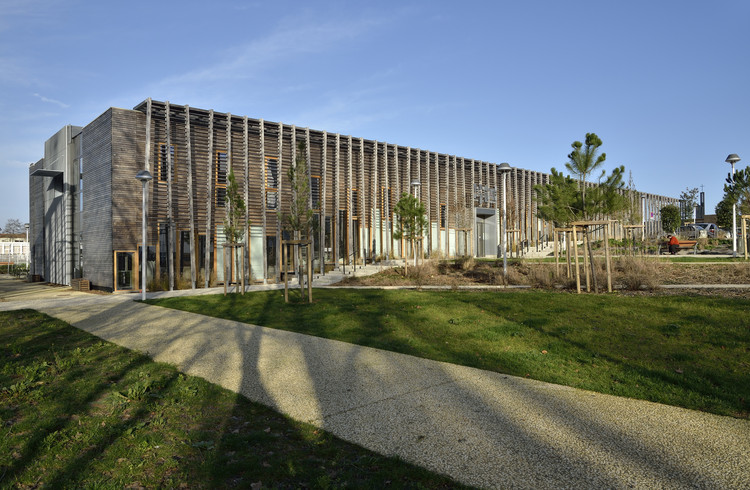 At the core of the urban renewal project for the Mireuil district of La Rochelle, “La Queue du Lézard” (“The Lizard’s Tail”) is a complex of local community amenities which is part of a plan proposed by ANRU (the French National Agency for Urban Renewal) developed together with landscape designers from the In Situ firm. A community centre, city sports grounds and a games library are grouped together in a 200 m long narrow strip made up of alternating built elements and voids. It is designed according to the principle of generic architecture, constructed around a concrete spinal cord that contains all the technical and services areas, a glue-laminated skeleton and a skin of Douglas Pine. This overall architectural expression, which allowed programmes to be adjusted during the concept definition stage, now presents a general view in which solids and voids blend into each other. This design method and its capacities for flexibility earned the project the nickname of the “lizard’s tail”.

The project is located in a district whose urban development, typical of large housing complexes, is based on the planning principles of the 1960s. Based on a free open plan, it takes its coherence from its composition on a strictly right-angled grid. The space freed by the various demolitions made it possible to reorganise the public spaces, to accommodate new buildings and to assert the opening of the old Châteaux d’Eau neighbourhood onto Mireuil. The building fits naturally into this urban layout and is stretched in the form of a long volume of wood, from East to West, from the church on Avenue des Grandes Varennes to Rue de la Résistance. From the viewpoint of form, the idea is to preserve a strictly horizontal building on a sloping site. This asserted horizontality gives coherence and legitimacy to this new programme in its confrontation with the scale of the site. This urban bonding, which takes places physically within the time required for rebuilding the city within itself, also forms a social bond in people’s minds and mentalities.The choice of generic architecture gives real strength to the scheme and allows it to accommodate the different programmes in a unified, coherent whole. It is the fine quality of the architectonic elements, the use of high-quality materials, and the play with light and sun that make it so varied and interesting.

Experimenting with the active strip concept

The community centre, located in the core of the scheme, makes use of the natural slope to organise itself in half-storeys. A concrete “spinal column” contains all vertical circulation routes, sanitary accommodation and building services areas. The roof contains a continuous services plenum covered with metal gratings that also cover the vertical ends. The adjacent roofs are planted and not accessible, but they are visible from neighbouring buildings. Glue-laminated timber portal half-frames, placed on a regular 2.70 m grid, form two spacious simple roofed structures – one on each side of this backbone – where all the scheme’s high- quality spaces are located. The envelope consists of a timber framework façade covered with Douglas Pine weatherboards, placed vertically and horizontally in alternation. These elevations appear to be held in place by vertical “props” that dance along the façades. These “props” consist of galvanised steel T-section stanchions, delicately faced with stabilised timber. On the south façade, the “props” are detached from the façade and support brise-soleil sun-breaks. Their positions are calculated to completely stop sunshine in the summer and to allow it freely into the rooms in winter. The games library is designed according to the same architectural and technical principle.

A warm heart for the community centre

Special attention was paid to the community centre’s reception area. Accessible from Place des Palabres on the South, it provides easy, safe access. Its central position allows easy access to all activities, and the large transparent glazed areas allow monitoring of circulation flows and of people. The reception lobby, with its warm, welcoming red colour, sets the tone for the whole scheme. This warm atmosphere is enhanced by the widespread use of wood (for the structure, internal finishes, and false ceilings), the large transparent areas and the omnipresent natural daylighting. Located on the three half-storeys, it has view of the entire building. The general organisation includes a very large space called the Agora on the West, which can be used completely separately or even rented for a token fee for private activities. It is entirely self-contained in terms of sanitary accommodation, eating facilities, access, etc. On each side of the active strip, there are rooms of different sizes, for offices or workshops.The simultaneous views of both sides of the building create a reassuring atmosphere and provide a permanent view of the surrounding city. On the other hand, the play of brise-soleil sun-breaks provide great privacy from the outside for users, who can see without being seen. 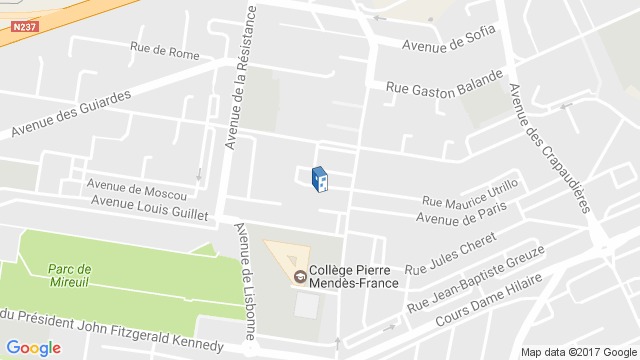 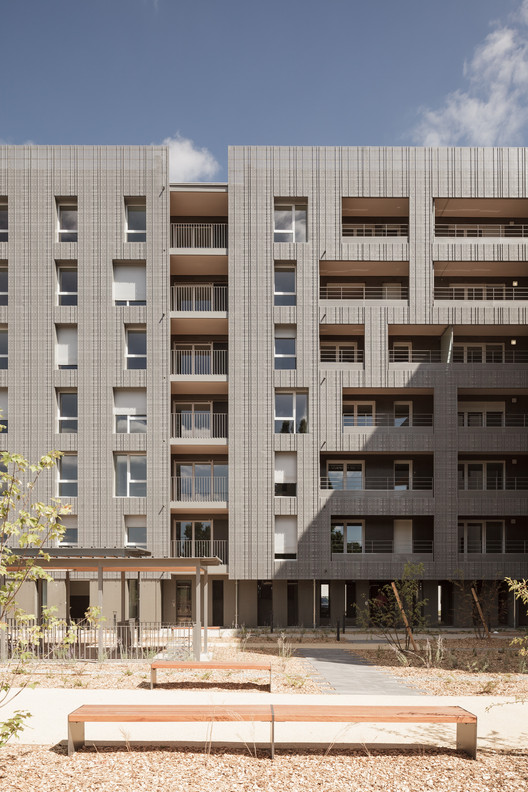