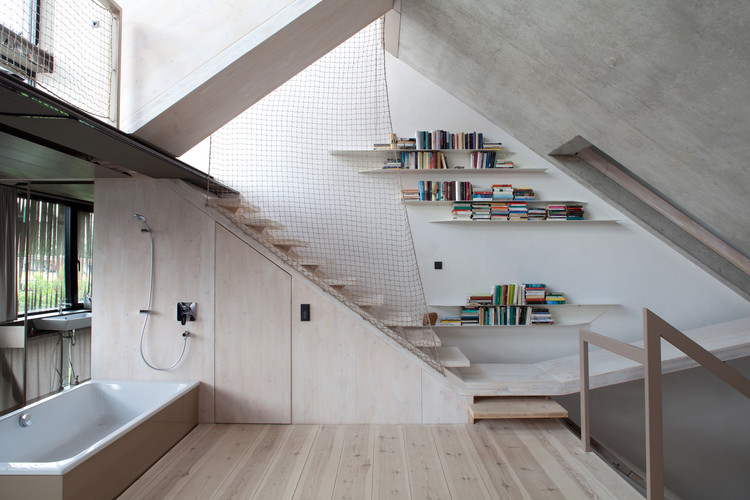 Text description provided by the architects. The house is all about space and light.

Developed by the section it has a continuous space stretching out over the total height (12 mts), length and width of the building: from entrance hall and playing area to a music level to a living room with an open bath to a reading area to the kitchen with terrace.

This open space is zoned by two concrete elements ‘hung’ between the firewalls. They contain the private (bed) rooms.

Due to their slants views are possible through the entire house.

Only few materials determine the interior space: fairfaced concrete for the solids, plaster for the firewalls, glued-laminated spruce for dividing walls, stairs and doors, and  pinewood planks for the floors, besides steel for the railings, glass for the facades and fringes for filtering views and light.

Interiors like the shelves and trunks are designed by us. According to the site along the former wall - the no-man’s land between East and West - now the Berlin Wall Memorial, the house has a severe outside contrasting the coloured balcony houses opposite in the former West.

The house is built on a trapezoid lot of land of 118 m2 with a small garden in the southeast towards a residential path and the wide side of the house to the northwest facing the plain of the Berlin Wall Memorial which is mainly a park.

It’s part of a settlement of 16 townhouses, the two neighbouring houses are by XTH-berlin as well.

The nearly all-over glazed facades are structured by steel girders, which span from one dividing wall to the other and take over the cross bracing. Two lines of fringy draperies in front of the ground and second floor provide screen and cover the windowframes. Technically we use a heat pump (pipes going 80 mts into the ground) with panel heating and rainwater tanks in the garden for use in the toilets...

You enter the house from both sides:

From the north beneath the concrete solid in an area with wardrobe, bathroom and the building services room.

From the south directly in the living space which opens to the very top of the building. This is the level to put the bikes, do handicrafts, play kicker, a spare room and a storage room can be seperated by a curtain.

The stairway leading up crosses the first concrete element with two sleeping rooms inside. Few steps up you reach the music area, a gallery with a horizontal net as a fall protection. The two sleeping rooms can be opened to this area by the use of 2,5m x 1,5m big elevating flaps (which besides to slide and play are used to ventilate the sleeping rooms to the quiet side of the house).

Further up you are on top of the first concrete element: Here you find the classic living space with sofa and oven, but also a bathroom included, to partition by curtain. Via a bridge you enter the second concrete element, containing another sleeping room. The sloped wall is becoming a huge pillow.

Continuing your way up you come to an intermediate level, which is mostly used as a reading area, looking back down you view the small garden on the back side of the house and the memorial park in front.

Another stairway and you reach the highest level on top of the second concrete element: kitchen and dining area, opening to a terrace. A huge rooflight (through which the stack-effect ventilates the to a maximum glazed house) lets the midday sun shine deep down on the lower levels. 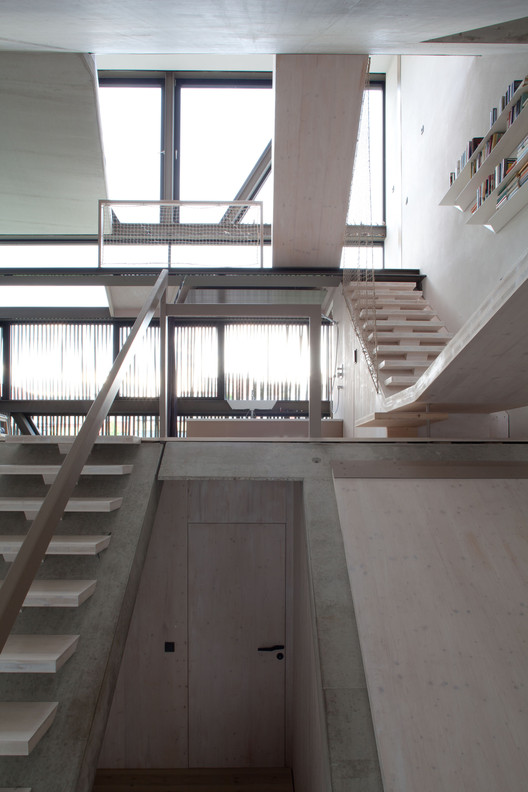 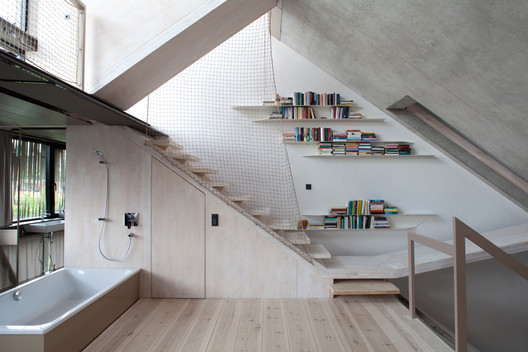