Save
House in Kawanishi / Tato Architects 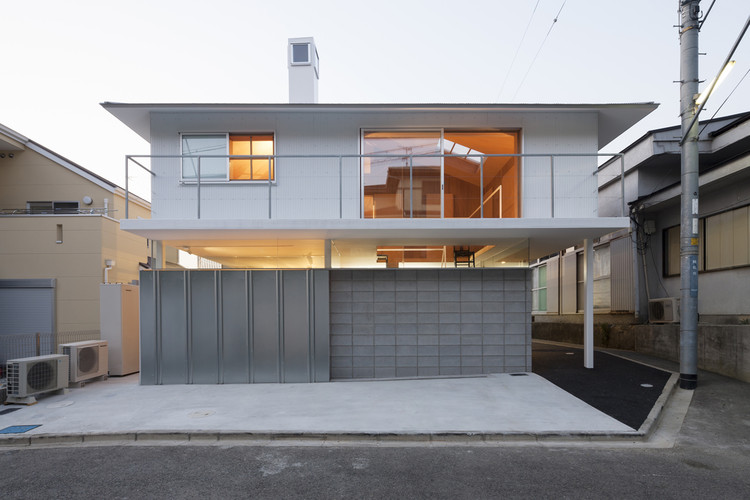 The project presented an unusual challenge: A public walkway ran adjacent to the western boundary of the house. It narrowed awkwardly from a three meter-wide road on approach from the north to a mere seventy centimeters on the eastern border to the southern corner of the site. If walls had been built to the boundary of the site to protect the residents’ privacy from the many passers-by who used this path, the path would narrow oppressively and become more difficult for the area’s residents to use.

Instead, the ground floor was set back from the boundary to give space to the path and to give the impression that the full width of the path continued through. Then the second floor of the house was built back over the path, out to the boundary of the site and its border with the road. There is a glazed entrance area containing a shoe cabinet that appears to sit beyond the border between the public and private spaces. It sits reminiscent of a bus stop containing furniture brought there by neighbors.

This theme of crossing borders between road and site is carried through the entire house design. Using the line of the neighbor’s concrete block wall, a new block wall has been built through to the south, crossing an interior space to become the wall of a storage space. This harnesses the height differences originally found in the site.

The area above the storage space then forms a landing for the stairs, and the level of the first floor has been adjusted to function as a desk sitting over the landing. This creates a space that is partly a border between a floor and partly a desk. Seen from the street, the ground floor, the first floor, and the interior and the exterior all appear to cross over.

The interior walls of the upper volume are all Lauan Plywood, which creates a singular space that lives in clear contrast to the ground floor, which contains a variety of materials and features. The whole design suggests an evolving living space with features that appear to cross beyond boundaries yet control them at the same time.

The house style called a “Queenslander” is a stilt house with a wooden structure and a balcony design specific to Queensland in Australia. While some researchers in Japan have studied it, I had little knowledge of it until I encountered photographs of Queenslander houses being lifted during their conversion and renovation from one to two-story structures. Since then, I have been interested in the form of this style of house.

By a curious coincidence, last year I received a request from an Australian man to design his house. I flew there in June in 2013 for the site research, where I found the city space was surprising. Most of the Queenslanders I saw had hipped roofs with overhangs that covered all of the exterior space of the house. These roofs were clad in corrugated iron, painted white or silver to reflect the heat. To facilitate ventilation, which is normally difficult with a hipped roof, ventilators were installed on top. During their conversion to their two-story form, various additional house features were being built in under the lifted volumes.

It’s a design solution that mirrored my own thinking in the design of this house, which was under construction at that time. Although I haven’t designed this house based on the Queenslanders, while I design my architecture, I am sometimes encouraged by the knowledge I gain from anonymous predecessors who have had to deal with similar matters beyond time and regions. It is a wonderful moment to be able to touch an unbroken line of history in architecture and accumulate knowledge from it.

The plan is defined by a grid, with four squares slightly shifted off center, and a modified square hipped roof formed by raising it at the center. The simple, slim rigid joint frame structure consists of 125mm×125mm square steel columns and 200mm×100m H section steel beams. It realizes its strength through its stiffness, by the low ceiling height and by the column bases buried in the foundation. On the edge of the eaves, small section flat steel pipes are inserted to channel the steel rafters around the structure. The concrete block wall on the ground floor stands without counterforts through the support of flat steel bars inserted into some of the block holes.