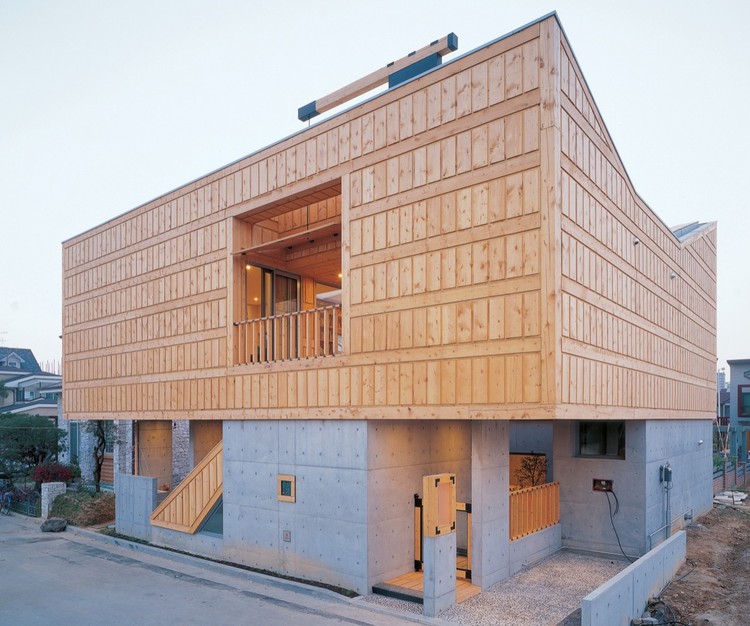 Text description provided by the architects. Traditional but Modern

"Traditional but modern!" That was the requirement of the clients, in their thirties, who worked as authors and publishers. For a long time, successful translation of tradition expressed in a modern vocabulary has been a goal of design for Korean architects presently. That has been a very complex puzzle and a difficult problem to solve. However, it's essential to study the heritage of tradition, since tradition could be the motive of creation.

The spatial design concept set for this small house was based on is dramatic circulation, which was characteristic of traditional architecture in Korea. The circulation of ancient Korea continues infinitely in space, overlaps and penetrates each other asymmetrically, and finally, produces several picturesque frames by surrounding nature and building.

At this time, the house has to be a shelter from the outer world. It is necessary to contact with nature which brings the urban house rich changes and variation during its life time(i.e., witnessing the blossoming and decaying of flowers). "Madang"(open court yard) was the very "nature" in ancient Korea.

Eight places of "madang" located in different levels were planned to produce attractive and interesting drama of spaces. All the major spaces of this house were designed to have a direct relationship to "madang". Entrance  court, basement courts Ⅰ&Ⅱ, jungja(pavilion), service court, inner court, and upper court Ⅰ&Ⅱ were all the "madangs" at different levels that linked each other with both horizontal and vertical circulation. There are interesting changes, variety, through the circulation between the "madang".

It is a very small site to have exterior spaces of desirable size by common layout of rooms at ground level. To have as wide an area of "madang" as possible, only a living room and a dining room are placed on he ground level; the others are either below ground or above ground. Moreover, the bed-zone-mass of the upper floor was built with a piloti structure; therefore, the space below can be used as "madang", too. This so called "RU" type program brings the house several merits of architectural condition. First of all, it gives the inner court a comfortable atmosphere because of the surrounding "madangs" which play important roles. Secondly, it creates another "madang", which was a part of the inner court, covered with a roof. Last, without any fence ( a solid fence cannot be built in this area according to the regional building code), it separates the house from public road, and, at the same time, it solves the problem of relationship between the "privacy" inside and the neighborhood outside. "Madang" is a buffer zone between the house and he public road. It is also the place to contact with the neighborhood.

A heavy mass of woods flying over the roadside was expected to evoke the "flying" image from traditional architecture were used in this project. "T" shaped metal ties used to fasten wooden members to each other, over hanging doors, and steel rods which hang out the doors are the traditional elements; however, they can be modernized and recall past as the same time.

Traditional culture is the origin of present ideas. The study of this project was only an experiment to read inheritance in modern language. 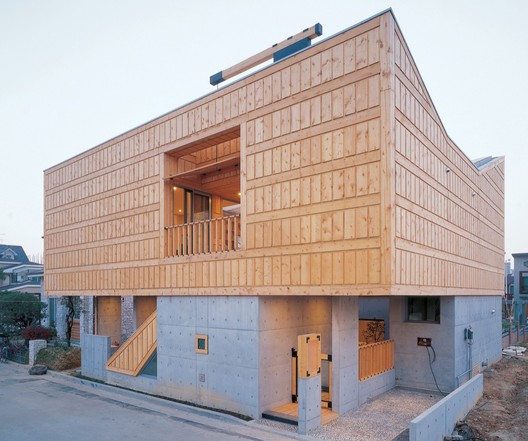