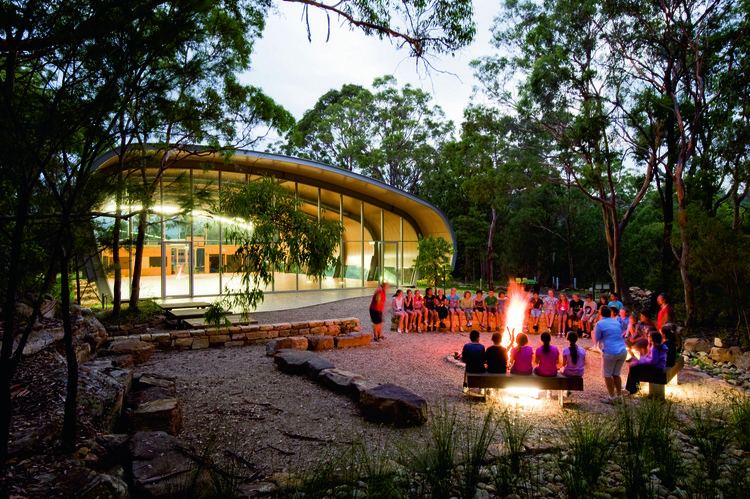 Text description provided by the architects. Allen Jack+Cottier adopted an imaginative approach to materials, structure and form when designing this multi-purpose hall on Milson Island in the Hawkesbury River, NSW.

Milson Island is a holiday camp, totally focused on health and social equity, which groups of disadvantaged youths visit on week long trips.

The brief for the building called for a robust multi-purpose sports hall to be used for indoor sports such as basketball, netball and volleyball, as well as theatre and dance performances and exhibitions. But its real purpose is to allow anyone who comes to this place to participate and have lots of fun while doing it,regardless of their physical or mental capabilities.

The building was inspired by the traditional canoe used by aborigines on the Hawkesbury River. These canoes were made from a single piece of bark, stripped from a Stringybark tree, seasoned over a fire and shaped by branches. Upturned and propped off the ground the canoe, in its frugality, demonstrated the essence of shelter.

The shape of the building emerged from thermodynamic analysis, a study of side wind forces on site, the need to shed leaves yet collect water, and the enclosure requirements. The use of natural thermal ventilation generated the roof shape, as smooth airflow required a clean, crisp interior skin. There are no visible ridges, eaves, gutters, downpipes or skylights on the exterior. The continuous wall/roof shape dispenses with gutters, reducing maintenance and removing a major bush-fire hazard. Rainwater, freed from the blockage of leaves and branches, falls directly into rock gardens for natural filtering and collection.

The design exploits the inherent properties of plywood with the shape of the building designed to unload wind forces on this exposed site, thus reducing the weight of the structure by 30%.  The island is accessed only by boat so all building elements, including the floor and service pods, had to be able to be barged across river to the site.

The steel frame, in conjunction with one cross laminated plywood bay, carries all the wind loads of 38m of building to the ground. Well almost to the ground! The structural engineer nearly had a heart attack when asked to include an uninterrupted slot between the floor and about the eye height of a twelve year old child. We love the idea that the kids can see the beauty of the landscape outside, whilst the taller adults are focused on the activities within.

We wanted the building to slot ‘gently’ into the site. The building was positioned into a pocket between two lines of trees where we recreated the roll of the ridge which had been removed as part of an earlier quarrying operation on the site, helping to reduce the apparent scale of the building.

A combination of twelve wind turbines and a series of floor mounted louvres ensure the building remains cool in Sydney's fierce summer heat.  In winter with the turbines and louvres closed, a heat plume forms to act like an insulation blanket.

At night, the curved wing shape of the new building acts as a proscenium arch to define the place for the campfire, an important part of each camp at the site. It works both for the audience inside looking out to the gathering space, and for the audience around the fireplace looking back into the hall.

Attached amenities and storage modules service the fireplace, the bushwalking activities and the oval.  They also serve to define a clear and strong entry space to the hall. Natural light from the roof windows, ground level slot windows and end walls create an almost art gallery-like feel to the hall.

When you are on this beautiful island site you are aware of the presence of this building and the way it so carefully respects its place. 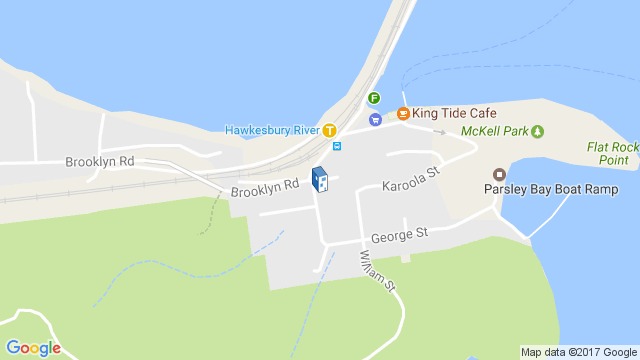 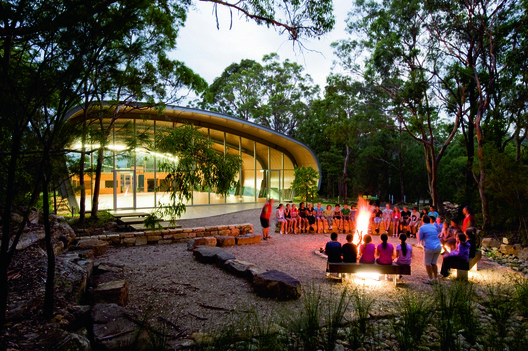