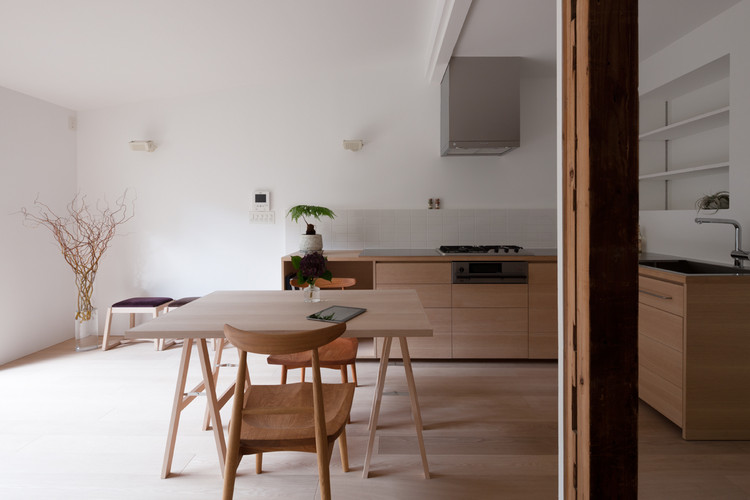 Text description provided by the architects. This was the renovation of a house which was built in the 1920’s and the hose was surrounded by old rows of houses. The house with a frontage of 4.1meters and depth of 12.8 meters was like so-called ‘sleeping places of an eel’. Because next building was way too close, inside of the house was so dark even though in the daytime. The house had been illogically renovated at several times before so that important pillars and walls were missed.

A resident hoped to live with furniture and paintings. A studio, sanitary, and home office were inserted as volumes of the structure. Those intended not only to reinforce the house but also to softly divide spaces to up and down and left and right.

The whole image was glimpsed from openings and slits which were widely opened and the volumes itself were painted with white color so that the texture could visually stand up to indicate the depth and extent.

The front of the studio opened to allay was changed from a shutter to windows. To change to the well reflective material of learn-to roof, it functioned as a reflector and could get the natural lightning to the inside so it diffused to bright all. Also, it was concerned the transition of brightness by time.

The existing structure was arbitrary shifted and newly inserted structures and reinforcements were painted with white color. Those were created the context of time but functionally which meant to indicate those things mixed naturally without any conflicts. The softly divided space may be able to use by any discoveries for the living, studio, and home office as extension with the factor of furniture and paintings which may increase in the future.