This project to organize and extend an industrial headquarters complex in the countryside of the French Swiss canton of Vaud explores the richness of the relationship between the built ensemble and the rural landscape it occupies.

Since 1974, the Bobst Group, one of the major producers of machinery for the manufacturing of packaging materials, has occupied this 29-hectare parcel in a bucolic setting to the west of greater Lausanne, straddling the three communes of Mex, Villars-Sainte-Croix, and Vufflens-la-Ville.

In 2012, Bobst decided to centralize all of its production activity in Mex. A new building at the main entrance to the site was designed to accommodate 6,100 square meters of office space as well as a 4,000 square meters showroom and training facility. At the other end of the site, next to an existing sports field and gymnasium, a second new building was designed to house a restaurant – a glass pavilion offering views of the near and distance landscape – and a day care center for up to 40 children. Across from this, an existing production facility was extended to increase factory space by 14,300 square meters.

One side of the long main building houses the great expanse of the Showroom and Competence Center; on the other side, the "clearing" of the courtyard garden is surrounded by glazed office and meeting spaces that function as the company's administrative center. The entrance hall with its double-height atrium connects these various programs and offers panoramic views that simultaneously embrace all of them. Extending into the landscape, the horizontal figure of the building is reinforced by the straight line of the eaves, in stark contrast to the undulating character of the site's natural topography. This horizontality is accentuated by the 600-meter-long “Promenade des Alpes” laid out by L’Atelier du Paysage, with its narrow stone-lined pool running down the middle on axis with a broad ramp that leads up to the main entrance.

The promenade effectively functions as a spinal column structuring the Bobst headquarters complex as a whole, while the main building becomes a linear reference embedded in the landscape of the surrounding countryside, taking on the appearance of a grand roof beneath which are sheltered programs as diverse as administration, training, and display. This contrapuntal relation to the landscape, one of the main themes of the project along with the handling of natural light, is also expressed in the choice of materials.

The facade of the Showroom, revetted with canted vertical stainless steel plates, subtly invokes a material common to the industrial activity taking place at the other end of the site; at the same time, it mirrors the image of the constantly changing patterns and colors of the sky as well as the subtle qualities of the pastoral environment, with the ubiquitous cultivated fields bringing a golden tinge to the reflective facades. 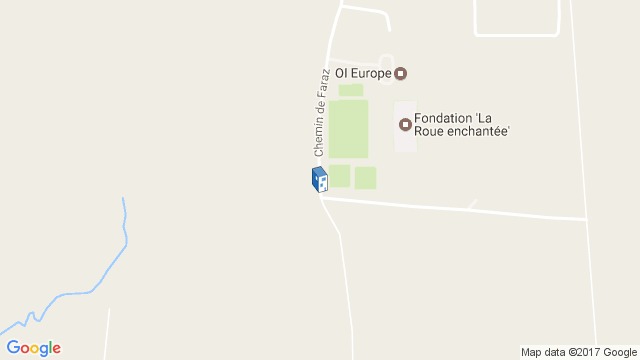 Location to be used only as a reference. It could indicate city/country but not exact address.
Share
Or
Copy
About this office
Richter Dahl Rocha & Associés
Office
•••