We are in the Desert of Tabernas in Almería, a valley famous among film buffs as the location of hundreds of movies, from classics likeLawrence of ArabiaandCleopatraand mythic westerns likeA Fistful of Dollars,to recent hits like800 Bullets, CaminoorThe Possibility of an Island.

One of the challenges of the project is to intervene in a mythical landscape establishing a dialogue, providing a comfortable environment while maintaining the validity of the old fictions.We built an oasis in which the main cast in the film can take a rest, while not interrupting the panorama for the camera.

The newly built spaces are discrete, invisible, underground, camouflaged among the terraces or behind the huge pines. The owner’s rooms and painting studio blend into the ground, built under an artificial hill that blooms with colourful desert flowers. At the heart of the hill is the bedroom.Among the terraced grounds a water reservoir hides, white, long and narrow, serving as a swimming pool. Below the level of the pool is a shaded area with a marble table, good shelter from the August heat.The three hectares of land are planted with ancient olive trees, which the owners turn into organic olive oil in the local mill.

The project is partly the rehabilitation of a traditional farmhouse, the locally typical whitewashed cubic construction with flat roof. The oldest parts are left virtually untouched outside and inside, leaving the original whitewashed rendering with all the irregularities and marks of time. We just replaced the pavement, through which the new heating, electricity and water ducts run.

Encuentro means Meeting, between the new and the old, between fiction and reality, between the visitors who may rent part of the house and its daily inhabitant, but the house is also an encounter between different needs, brought together and separated by a water-filled courtyard.However, a small opening ("the cat gap") allows the owner’s cat to circulate freely through all areas of the house, not needing to cross the flooded courtyard.

The central courtyard, the enclosure of the lounge and the porch roof, are protected with what we call "instant fig tree."It's a double lattice with silhouettes of fig tree branches and leaves, in laser cut and galvanized steel sheet.The two layers are offset according to the solar angle, so that in winter they let the sunlight in, while in summer they cast a dense shade.As natural fig trees do, but not needing to wait for them to grow.

To the West, the spaces merge with overlapping vegetation, terracing land and artificial hill.The East wing of the house is decidedly orthogonal instead, aligning with the road from the town of Tabernas

Fifteen minutes from Almeria airport and with an ultra-fast Internet connection, an old farmhouse in the desert of Almeria becomes also a hyper connected house, allowing the other owner to work every day in the stock exchange of an Asian capital. 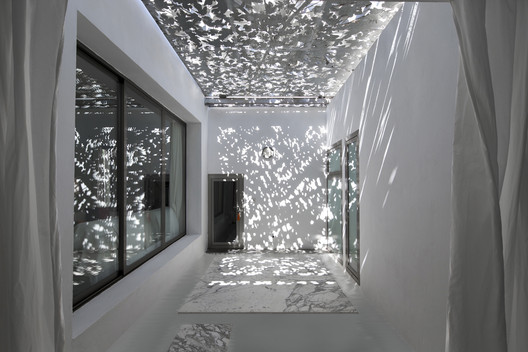