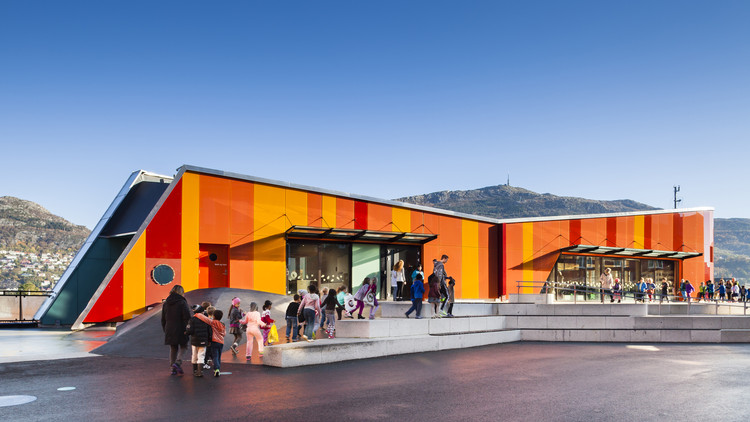 In 2005 the architects in Arkitektgruppen Cubus AS was asked to present a proposal for the conversion of a wartime bunker in a run down neighbourhood to a local sports arena.

The bunker proved insufficient in size, and a search for alternative sites began. This quickly lead to the realisation that this run-down neighbourhood had very little social interaction and very low self esteem, largely due to the lack of safe and attractive meeting and activity places and a negative community identity.

An urban analysis was undertaken in order to map the area’s qualities and challenges. The process ended with an integration of the new sport arena as well as some neighbourhood functions into the existing school, thereby creating a new and lively focal point for the whole area. This proved to strengthen both the social structure and the identity of the neighbourhood.

The existing school occupies a tight and inclined space between two streets: Rogagaten below and Møregaten above. In order to fit in the programme of a new sports hall with international standard, stage and musical facilities as well as a neighbourhood café, the school yard was excavated and the new facilities located below. The neighbourhood- programme opens out onto Rogagaten at the bottom level whereas the school related spaces are organised in direct contact with the school yard at upper level. On the mezzanine in between there is a gym as well as technical rooms.

The existing school was a listed building and close cooperation between designers and the heritage office was necessary in order to find a good balance between preservation and redesign. The original expression of the external facades, such as natural stone work, slate roof tiles, small pane windows, cast iron details and panelled doors has largely been maintained. Interior details and materials that were durable and aesthetically pleasing such as flagstone flooring and dado brickwork have also been preserved. Some subtle alterations have been made to allow for better use of daylight and increased functionality, new doors and internal windows between the corridor and the classrooms, two new bay windows on the north facade allow both a view out and let daylight in to the previously dark spaces.

The existing school was designed by the municipal architect Kaspar Hassel in 1924. The existing school has a massive and majestic expression. The new building has a contrasting expression of lightness and modernity, utilizing large areas of glazing allowing the surrounding distant landscape to be visible through it. The existing walls are terracotta red, a colour that is repeated in the new glazed facade with the addition of some contrasting shades of orange and mauve to create a more lively expression.

In addition to being environmentally beneficial, re-use of an existing building can also have exciting synergy effects; the co-location of and old school and new sports and culture facilities gives a wider range of use than any of the projects would have been able to provide apart. The sports hall is an integral part of the school and nursery during day time, whereas it is open to the public after hours. The schoolyard landscape is likewise a popular arena for outdoor sports and activities in the evening. The central location of the school in the domestic neighbourhood reduces need of transport.

The schoolyard is created on the roof of the sports hall. Elements that invite play and activity are designed as an integral part of the form and materials, such as surfaces for skating, running and cycling, ramps for skating and sledging, walls for climbing or acrobatics and a small amphitheatre. The seamless coherency of architecture and landscape offers a safe, varied and inviting environment. Along the edges of the old school wall the roofscape is chamfered to allow for the authentic stonework to be visible.

The schoolyard is accessed from Rogagaten below by a natural stone amphitheatre with seating. This space provides a focal point for the whole neighbourhood and can be use for social gatherings and ceremonies.

Climbing plants add a touch of green to the buildings and this bright grass ”rug” marks the main entrance to the neighbourhood programme in Rogagaten, so as to encourage vehicle speed reduction. The cast iron fences, flagstones and existing vegetation has been carefully repaired and this has acted as an inspiration to the rest of the project so that high quality materials are utilised in the new elementsas well, so as to create a coherent whole and continuity between the different spaces and levels.

The original school gave access via narrow flights of dark stairs both externally and internally. The rehabilitation has established new infrastructure to give universal access to all levels of the main part by both lifts and ramps, as well as improved interior lighting and better visual signage including colour coding. The new part has its own lift connecting all 3 levels: U-1, U and level 1.

Also the external landscape is designed to give universal access via sloping planes and ramps to all areas whereas before there was a multitude of levels interconnected with stairs due to the topography of the steep site.

Møregaten is a pedestrian thoroughfare route as well as neighbourhood play area. The nursery has it’s own designated play-area but the youngest school children have direct access to the street from each classroom.

The design brief was to transform a rather dark and dank street into a bright and inviting activity area that is coherent despite the necessary railing and fencing. A variety of robust, high quality materials like paving brick, recycled cobbles, wood, impact flooring and vegetation creates a varied, inviting space in the street along the terracotta-red school walls. 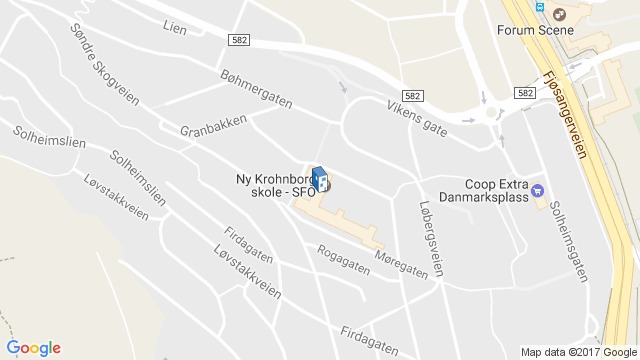