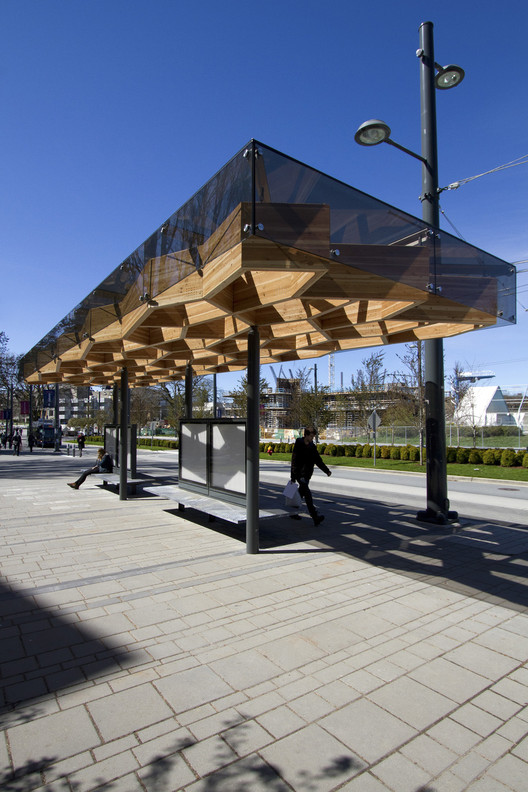 The UBC campus is full of holes. Some are below ground where construction sites pepper nearly every corner of campus. Some are at grade where the historic figure ground is a mixed bag of building forms, dead-ends and disjointed academic neighborhoods. Some are higher up still, off the ground -- floating in the tree canopy.

The University has been hard at work to address these gaps in its fabric, spearheading a massive public realm overhaul and myriad improvements to student life. One of the most prominent undertakings is at the main entrance to campus along University Boulevard. Small, but integral to the Boulevard’s redevelopment, are two strategic insertions into the transit infrastructure that provide covered shelter for a trolley-bus loop. The transit shelters act as a conceptual extension of the nearby line of Katsura trees. Slender steel columns are arranged in a staggered line and hold up an oversized cellular wood structure clad in glass.

From a distance, the glass reflects and fills gaps in the surrounding trees, but as one approaches, the wood is revealed and creates the effect of walking underneath branches. The shelters help create a long covered space, continuing the canopies of adjacent buildings down the Boulevard into the heart of campus while the sidewalk remains largely uninterrupted by vertical structure, reducing impediments to heavy pedestrian traffic.

The shelters aim to create the kind of visual balance between random and regular pattern that one finds in nature. With the tree canopy as a starting point, the structural exploration began as a series of beams, then the beams connect to hold up glass. We sought to imbue that structural grid with movement and above all, to create a design that performs both visually and structurally.

After a series of pattern explorations, structural analyses and fabrication scenarios, the form that emerged was a single repeated pentagon rotated and flipped along its edges. This produced a regular module for ease of fabrication and a random arrangement for visual movement. It repeats without becoming repetitive.  In order to keep the shelters light and streamlined, and to give the canopy a floating quality, structural elements take on multiple tasks; columns act as rainwater leaders, the precast ductile benches support steel map cases and both fit between the spacing of the columns to provide a windbreak.

A self -tapping screw system made the construction possible whereby 12,000 screws drill directly into the steel plates creating a moment connection and eliminating the potential for deflection or buckling that might have occurred with a typical bolted connection.  The shelter is more about wood craft than wood tectonics, hidden rather than expressed connections to achieve a tight fit between segments and maintain the monolithic appearance of the cellular wood structure. 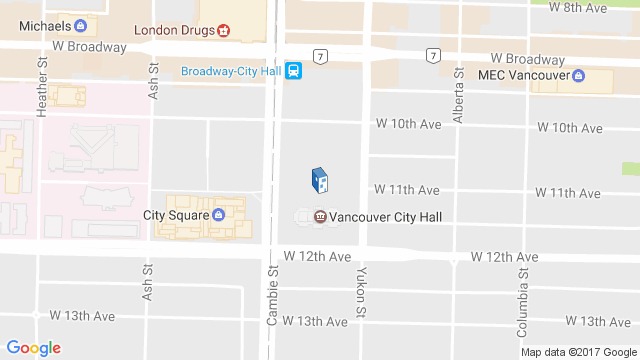 Location to be used only as a reference. It could indicate city/country but not exact address.
Share
Or
Copy
About this office
PUBLIC Architecture + Communication
Office
•••