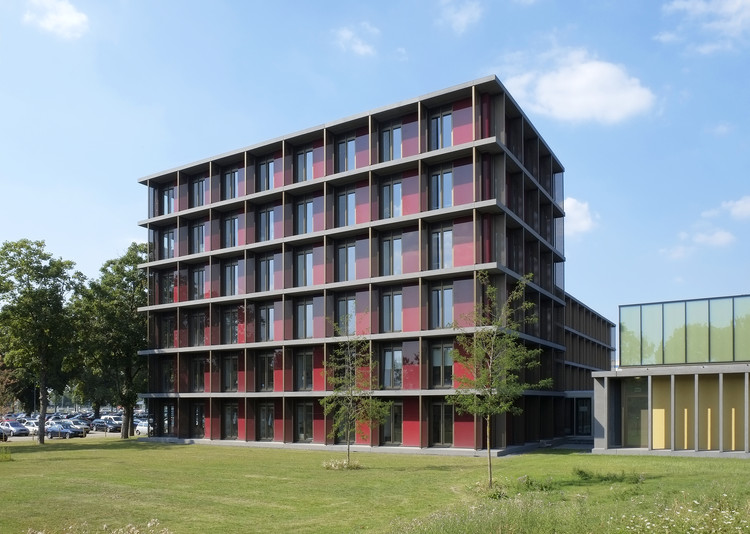 Text description provided by the architects. Vision to make the impossible possible

Under the leadership of Prof. Dr Rainier Goebel, the Cognitive Neuroscience department at the Maastricht University (Department of Psychology and Neuroscience) expressed its ambition in 2008 to further expand its name in the field of brain research. The department also wished to offer research groups and external parties the possibility of using advanced research facilities. The largest clients for this are start-up businesses and university spin-offs. They can rent space in the building from the Stichting Life Sciences Incubator Maastricht (SLIM). The new research institute is called ‘Brains Unlimited’.

At Brains Unlimited, scientists, entrepreneurs and clinicians work under one roof, undertaking research into the function of the human brain in order to gain new understanding and to develop clinical applications that can then be commercialised. Brains Unlimited also offers professional education in the field of neurophysics and neuro-imaging and it provides accommodation for spin-off companies in its BioPartner Incubator. The results of the research support the development of new treatments, diagnoses and technologies for such diseases as Alzheimer, Parkinson, epilepsy, schizophrenia and MS.

To fulfil its ambition, the university has built a new educational, office and laboratory facility for brain research. The education rooms (auditorium and classrooms), offices and laboratories are accommodated in the main building. The adjacent Scanner Lab houses state-of-the-art research equipment in the form of three MR (Magnetic Resonance) scanners. The most important asset is the fMRI (Functional Magnetic Resonance Imaging) scanner with an ultra-high (9.4 Tesla) magnetic field of which only four exist in the entire world.

The intrinsic relevance of this fundamental research has convinced Europe, the Province and the business community to make the challenging financial running of this project feasible through subsidies and contributions under the motto ‘Vision to make the impossible possible’.

Brains Unlimited is the first project to be completed at the Maastricht Health Campus. The Health Campus is a valorisation campus where ideas and innovations from scientific research and practical care are developed (further) and clinically tested on-site. Work is currently being undertaken on the ‘Living Lab Limburg’ and ‘Particle Therapy Center’ follow-up projects. Research concept

‘Synergy and meeting’ were the keywords used by the client and user when selecting the design team. This range of ideas offered the greatest chance of achieving the fundamental principles.

Brains Unlimited physically and virtually brings together education, fundamental research and industry. The meeting between these different ‘blood groups’ is essential for achieving the intended innovation and accumulation of knowledge. Forced and unforced contact was of primary importance in the spatial organisation of the building. In addition, the design team was selected on a ‘Total Engineer’ basis so that it was able to provide an optimum response to the requirement to work out the concept meticulously to the very last detail.

The planning preconditions were formulated by von Brandt Stadtplaner und Architekten on the instructions of the Municipality of Maastricht. The basis for these was the Master Plan for Randwyck Noord produced by Prof. O.M. Ungers in 1990, in which the aim is to achieve a pluralistic city structure using the “Stadt in der Stadt” theme. This theme involves creating ensembles that have a strong spatial interrelationship. The result is “Raumformen, vom Einzelraum über die Raumgruppe bis zum Raumkomplex” which together create a “Mikrokosmos, in dem die Komplexität des Makrokosmos reflektiert wird”. The diversity of function, scale and design of the built environment are accepted. Public space and green structures form important elements for creating clarity and cohesion in the area.

The site is located on the southern edge of the university campus. Brains Unlimited is the first project to be undertaken on the currently undeveloped strip of land that is enclosed by the Oxfordlaan and the Oeslingerbaan – on the north and south side respectively – and the Universiteitssingel and the P. Debeyelaan on the east and west sides.

The development line is to a large extent determined by two factors: on the one hand the building line on the Oxfordlaan and the Oeslingerbaan that has to be retained and, on the other hand, the existing stand of trees surrounding the historic skating rink which also had to be retained. This skating rink is used as an organising element for traffic management on the site.

Brains Unlimited is the first project of the university on this campus with a clear relationship to the ground level. After all, the first floor of all of the other buildings will be open to the public. Brains Unlimited has deliberately deviated from this in order to increase the human dimension, contact with the outside space and the liveliness of the area as part of the required synergy.

The architectural detailing of the building elements is based on the theme of “unity in diversity”. For this purpose, all aspects of the floor tiles are visible like staves and thus form a strong Leitmotiv. As in the game of Dominoes, the last tile put down passes on half of its properties to the next tile and the same method has been adopted with the construction of the different building elements in the ensemble. Each building element takes over part of the previous building element but then adds its own aspects to this so that they still derive their own individual identity from this.

The southern building block (building element A) accommodates the SLIM Incubator and the central vertical access to the ensemble. The building element has a band structure with an infill. The protruding bands are made from dark-grey prefabricated concrete. The infill material consists of two red enamelled glazing units that are positioned randomly in respect of each other. The frames are made of dark-brown anodised aluminium. Perforated aluminium strips are placed between the bands. These are dark-bronze anodised. The strips act as a vertical sunblind and give the building a certain elegant lightness.

The northern block (building element B) accommodates the Department of Psychology. The structure is similar to that of building element A. The building element manifests more towards the garden side and therefore has an infill that is formed by planks of oiled Accoya wood. The vertical strips here are designed in a lighter bronze colour.

The entrance to the ensemble is formed by a separate, one-storey building. The building forms the link between the central hall and the Scanner Lab. The entrance building has a reserved, abstract design, consisting of aluminium bands and structural glazing units, jointed together using sealant. In turn, the central hall forms the link between building elements A and B; a joint between the building elements. It is a transparently designed volume consisting of a slender aluminium curtain wall with glass. The reception area and reception function are located in this volume. The physical link between building elements A and B is created using three footbridges, arranged above each other, that keep the transparency of the central hall intact. This hall therefore forms the synergy junction where all blood groups meet each other. The auditorium, espresso bar, reception, education rooms, kitchenettes and sanitary rooms are all incorporated in the hall.

Sustainability forms an integral part of the design concept. A number of passive structural measures have been incorporated first. The façade incorporates fixed structural horizontal and vertical sunblinds in order to protect against the direct heat load from the sun on the east, west and south façades. This saves on the cooling capacity required and guarantees an unrestricted view for the user. The choice of a column-free and beam-free span has also been evaluated for lifecycle costs. The other façade materials (glazing and preserved wood) have been selected on the basis of their environmental impact and maintenance requirements. A number of energy-saving measures have also been incorporated in respect of the systems. These include heat recovery from the MR equipment cooling, CO2-controlled ventilation, natural ventilation, daylight- and motion-controlled lighting, choice of type of lighting sources, Building Management System control for equipment in stand-by mode, etc. A BREEAM-bespoke plan (ambition: BREEAM Very Good) has been instigated for the project with the Dutch Green Building Council. The Very Good score was achieved in the design phase.

The initiation phase for Brains Unlimited came about through collaboration with the European Union, the Province of Limburg, Maastricht University, MUMC+, Siemens, Forschungszentrum Jülich, the university’s property department and the end users.

Within its organisation the university appointed a compact core group that remained virtually unchanged from the moment of formulating the vision through to project completion. The core group included end users and the property department. On the basis of vision and experience of complex projects, the design team was selected to be a ‘Total Engineer’ team, which means that it was assigned an extensive role. The design team became responsible for the design from landscaping to fitting out. There was very little change in the client team and in the design team. Personal involvement was essential for monitoring the design concept and the building quality.

Design team and contractorsWhen configuring the project organisation and selecting the consultants and contractors, the university always strived to achieve integration and compactness. Because of its technical complexity the ´Brains Unlimited´ project was split into two sub-projects. A European tender resulted in Siemens – as a supplier of state-of-the-art research equipment - being awarded a Design & Build contract for the Scanner Lab. Wiegerinck took care of the design up to the environmental permit level and then remained involved as aesthetic consultant so that the entire project was detailed architecturally as a single ensemble.

For the other building elements a call for tenders for the Total Engineer was issued at the same time. Five design teams were requested to present their vision for this project. Wiegerinck formed a compact design team together with Arup. All of the required design disciplines were represented within these two firms. The tendering strategy and the associated selection criteria for the contractors were determined during the design process. This resulted in a tender for a single lot and an award of contract on the basis of the Most Economically Beneficial Tender in which price and quality (in the form of planning and action plan) were jointly evaluated.

Both the Scanner Lab and the main building were designed by a compact team. Architect, building services consultant, structural engineer and landscape architect worked closely together to arrive at the required building concept. Every last detail was discussed and agreed in order to achieve a strong degree of integration and high level of finish. 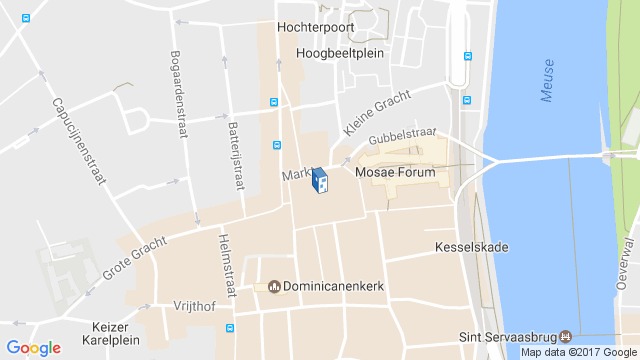 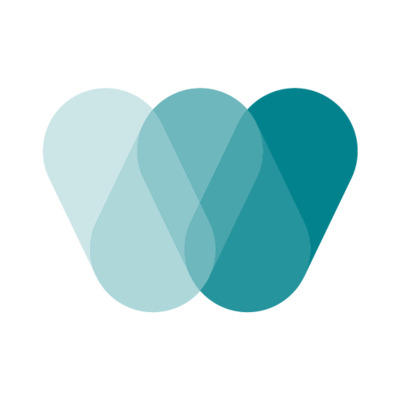