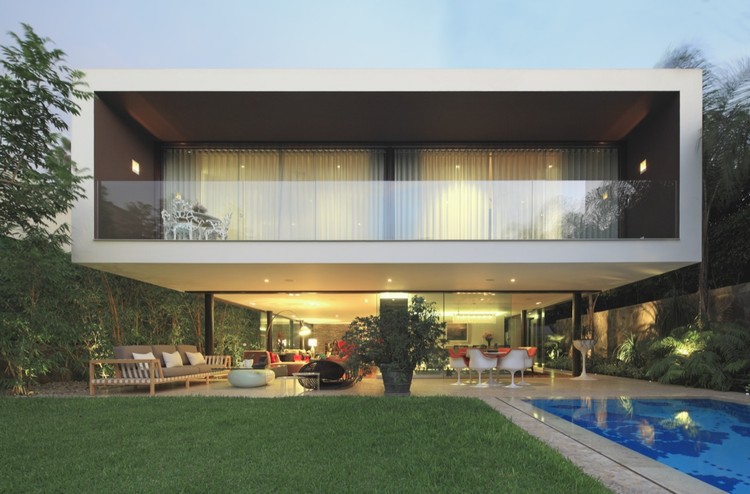 Text description provided by the architects. The project is located in “Las Casuarinas” urbanization in Lima City in a 1,080.10sqm plot.The proposal contemplates the development of a two floor residence with an upper floor access. Through a bridge from the parking space you can gain access to the first floor which is distributed in the following way:

A living room with a secondary stair that connects to the living room in the basement, the master bedroom with 2 walking closets, 1 bathroom and a terrace; and 2 more bedrooms each one with a bathroom.

You can access the upper floor by a main stair from the first floor which has a double height distribution hall, another living room, the guest bathroom, dining room and kitchen. The servant’s area is separated from the rest of the house and has an independent entry with the laundry service area and the servant’s bedrooms.

The garden is in the upper floor and is enclosure with a two level stone jardinière which are situated as a sort of buttress around the plot perimeter. This is because the volume of the excavation. Also, the plot is enclosure by 3 meter bushes.

The house is like a modern container such as the first generation of Le Corbusier’s projects, where natural materials like stone, marble and wood were used. The upper floor was worked as a box made of glass, from there you can have a privilege landscape treatment and the exterior lighting can be graduated for different social situations.

The first floor was thought as a drilling container with a higher roof so the interior sensation could be as good as the upper floor. The main idea was to create a different proposal with codes of difficult recognition so the house could get older with the owners. The whole house has different types of references, achieving a modern eclecticism but trying to belong to an alternative future. 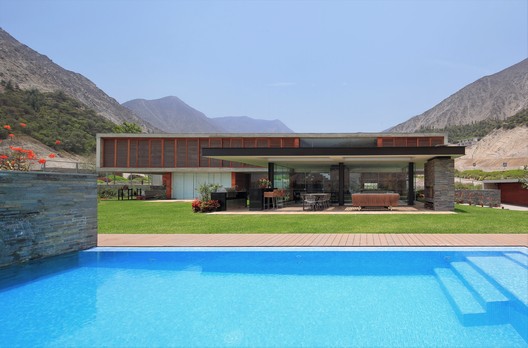